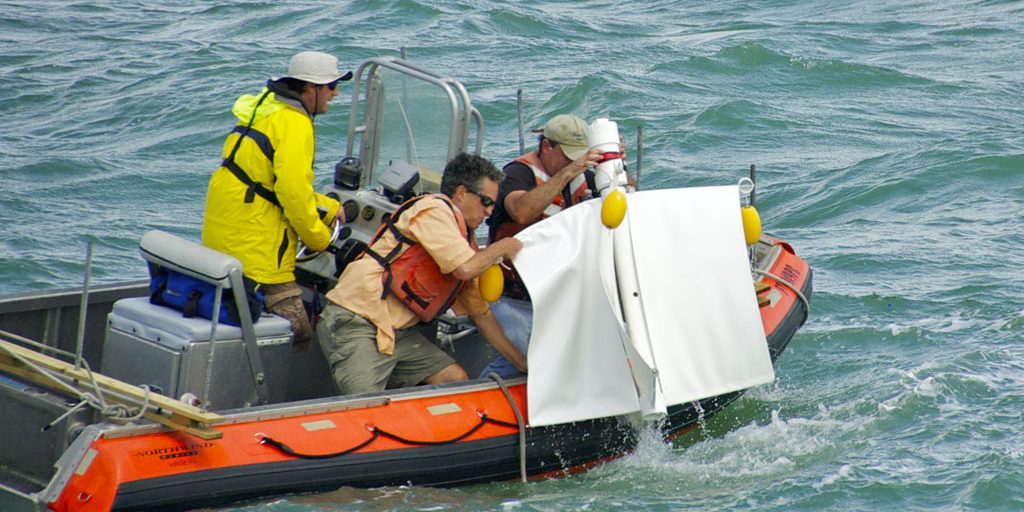 (From Winter 2013 Newsletter) With a Gulf of Mexico Research Initiative (GoMRI) award, the Consortium for Advanced Research on Transport of Hydrocarbon in the Environment (CARTHE), led by Dr. Tamay Özgökmen at the University of Miami (UM), is conducting the largest-scale experiment of its kind in the Gulf. This past summer, over the course of a week, Dr. Brian Haus (UM) and his research team deployed 300 custom-made drifters near the Deepwater Horizon site and Louisiana coast.

The release of drifters, known as the Grand Lagrangian Deployment (GLAD), is an essential first step to understanding the complex and elusive surface ocean currents that transport pollutants.

“In light of the Deepwater Horizon oil spill, it became clear that understanding the multi-scale interactions among small, large, and sub-mesoscale oceanic flows lies at the very heart of being able to improve our understanding and prediction of oil spills” – T. Özgökmen

Using GPS satellite positioning, the specially designed drifters reported their positions every five minutes – a rate not achieved before in an experiment of this magnitude. The Naval Research Laboratory supplied 32 realizations of Navy Coastal Ocean Model (NCOM), running at one and three kilometer resolution to provide 72 hour forecasts. CARTHE investigators used a fully coupled ocean-wave-atmosphere modeling system for real-time data processing. These detailed data were essential in determining more precisely where the drifters were launched according to ocean features.

Data from the drifters will help scientists understand the role of near-surface ocean flows in spreading and dispersing oil. Researchers are studying interactions among ocean flows, the levels of influence on transport that large and small flows have, the size of oil spread at which large flows dominate, and the length of time that large flows control the direction oil will travelThe CARTHE program includes 26 Principal Investigators from 12 research institutions in eight states. Together, these scientists are embarking in a novel research direction, developing a suite of integrated models and state-of-the- art data assimilation that bridge the scale gap between existing models and natural processes. For the first time, CARTHE’s field work at sea, combined with laboratory experiments and development of interconnected modeling systems, will produce a comprehensive modeling hierarchy that provides a four dimensional description of oil/dispersant fate and transport in the Gulf of Mexico and coastal environments across all relevant time and space scales.

To see an animation of the CARTHE drifters, take a look at the Video Clip of the Quarter on page 6 of this newsletter!

For a perspective from the field, check out the CARTHE GLAD blog, featuring graduate student Nathan Laxague as he chronicled the 17-day research expedition aboard UM’s RV Walton Smith. As part of this GLAD experiment, scientists and students deployed more than 300 drifters in the Gulf to collect ocean current data.