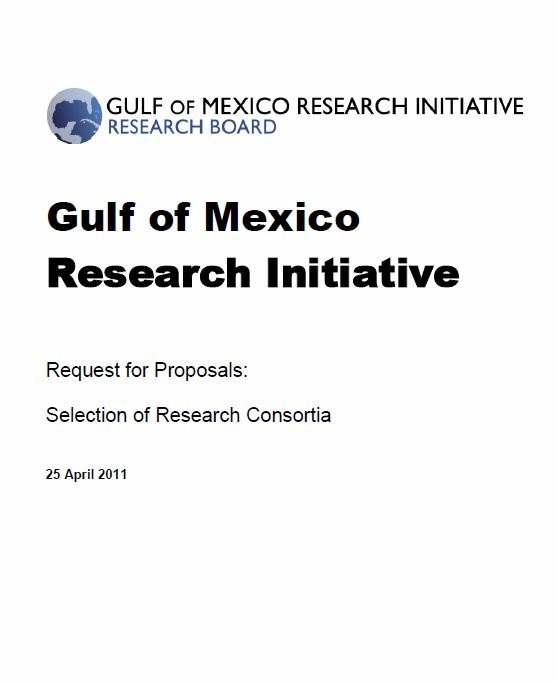 On 24 May 2010, BP committed $500 million over a 10 year period to create a broad, independent research program to be conducted at research institutions primarily in the US Gulf Coast States. The program will be known as the Gulf of Mexico Research Initiative (GoMRI).On 15 June 2010, BP announced the names of the scientific experts who would form GoMRI s independent Research Board.  BP, in consultation with the White House and the Governors of the five Gulf Coastal States,later expanded the GoMRI Research Board to 20 members by adding additional scientific expertise. The Research Board is responsible for preparing requests for proposals (RFPs), enabling an open and transparent peer review process, selecting proposals for funding, and reviewing annual progress for continuation funding.

On March 14, 2011, BP and the Gulf of Mexico Alliance (the Alliance is a non profit entity formed by the Governors of the five Gulf Coastal States) entered into the GoMRI Master Research Agreement (GoMRI MRA). The GoMRI MRA creates the structure for the GoMRI, the selection and distribution of grants from the GoMRI, as well as the funding, conduct, and oversight of research in furtherance of the purposes of the GoMRI. Any Research Consortium,research institution, or co investigator that receives funding, directly or indirectly, in whole or in part, under the GoMRI is subject to and must comply with the terms and conditions of the GoMRI MRA. The GoMRI is an independent scientific research program and is separate from the Natural Resources Damages Assessment process, and BP agrees that the participation of the Alliance in this Agreement shall not result in a credit against or defense to any claims for natural resource damages or assessment costs.

The objectives of the GoMRI are to investigate the impacts of the oil, dispersed oil, and dispersant on the ecosystems of the Gulf of Mexico and affected Gulf Coastal States in a broad context of improving fundamental understanding of the dynamics of such events, the associated environmental stresses, and the public health implications. The GoMRI will also develop improved spill mitigation, oil and gas detection, characterization, and remediation technologies. The ultimate goal of the GoMRI will be to improve society s ability to understand and respond to the impacts of petroleum pollution and related stressors of the marine and coastal ecosystems, with an emphasis on conditions in the Gulf of Mexico. Knowledge accrued will be applied to restoration and to improvement of the long term environmental health of the Gulf of Mexico.

The GoMRI emphasizes interdisciplinary science and technology involving experts in physical, chemical, geological, and biological oceanography; marine biology; coastal and reef ecosystems, fisheries and wildlife ecology; public health; and associated development of physical, chemical, and biological instrumentation, advanced modelling, and informatics.  All activities will combine state of the art research with deep scientific knowledge of the ecosystems of the Gulf of Mexico to create fundamental advances in understanding the interactions that occurred and continue to occur among the marine and coastal ecosystems, oil, and oil dispersants produced by the catastrophic loss of the DWH oil drilling platform. The success of the GoMRI depends on a combination of regional knowledge with regional, national, and international research innovation.

The GoMRI does not accept unsolicited proposals.  Instead, research is funded within designated theme areas during designated cycles.  A description of funding awarded to date follows, but more detail can be found here: http://research.gulfresearchinitiative.org/.

The second RFP (RFP II) focused on activities involving less money and less internal management than a Research Consortium. RFP II requested proposals from individual or collaborative efforts involving a principal investigator (PI) and co principal investigators (co PIs) from up to three additional institutions and was focused on the same research themes described in RFP I. RFP II funds activities for GoMRI Years 2- 4 and the total funds available for distribution are $7.5 million per year.

RFP III supported continuity of critical observations and sampling  related to the Deepwater Horizon oil spill from during July 1, 2011 to September 30, 2011, including ancillary work, such as cataloging the observations and samples and preparing them for availability to the wider community.  RFP-III was intended to fill a funding gap in critical data acquisition. The total funds available  through RFP-III were $1.5 million.

For RFP V, the Gulf of Mexico Research Initiative Research Board selected a total of 22 research proposals to be funded from 2016-2018. Nearly $38 million was awarded individual investigators or collaborative efforts comprising a PI and up to three co-PIs studying the effects of oil on the Gulf of Mexico ecosystem and public health.

GoMRI’s RFP VI awarded $50 million for 8 Research Consortia and 23 individual investigators or small collaborative efforts from 2018-2019.  This RFP was the final research competition and funded both consortia and individual investigators’ proposals at the same time in order to fund the best science that complements the research efforts completed or in progress under RFP I through RFP V.

Two additional RFPs were released by GoMRI within the 10-year program: the RFP for Creation of a Documentary and the Request for Sample Analysis Funds.  To help tell the stories of GoMRI researchers and share the results of their research, GoMRI funded a documentary project in 2014.  An award was made to Screenscope, Inc. and three films were created, Dispatches from the Gulf 1, 2, and 3. In 2018, GoMRI made supplemental funding available for discrete sample analysis activities, including sample processing, analysis, and interpretation of results.