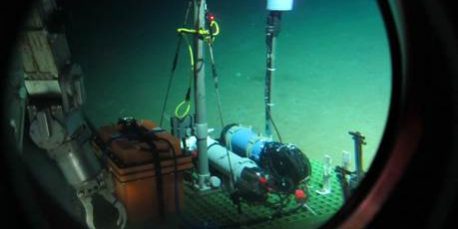 The mini-Lander is essentially a frame with a drop weight and an instrument package (in this case, methane, O2, pCO2, T, salinity, and pH sensors). Positioned near a feature (a gas vent in this case) and left in place from a few days to a few months, it continuously measures those parameters. This one was deployed for only 2 days but yielded excellent data. The mini-Lander was designed by Howard Mendlovitz, a chemical engineer working in the lab of ECOGIG PI Dr. Chris Martens. Photo Credit: ECOGIG and WHOI.

(From Fall 2014 Newsletter) Scientists from the Ecosystem Impacts of Oil & Gas Inputs to the Gulf Consortium (ECOGIG) had a very busy cruise season, with an exciting return to the Macondo wellhead as one of their many expeditions. The 2014 cruise season started off aboard the R/V Pelican in March to service and recover instrumentation measuring deepwater hydrocarbon cycling, and concluded in July aboard the E/V Nautilus with an expedition focused on deep sea corals and how they have been impacted by the Deepwater Horizon oil spill. The cruise to return to the Macondo wellhead site took place aboard the R/V Atlantis in March and April, and saw the return of the deepsea submersible Alvin to service, after being out of commission recently for improvements including upgrades to the interior ergonomics and updates to the command-and-control system. The research cruise aboard the Atlantis lasted for more than three weeks and included 17 dives with Alvin for up-close encounters with natural hydrocarbon seeps, oil- saturated methane hydrates, brine lakes, and sponge gardens. The general purpose of this cruise was to revisit the wellhead site and a natural hydrocarbon seep to collect water and sediment samples, to measure hydrocarbon concentrations and degradation rates, and to conduct detailed microbial population surveys. The expedition was led by Chief Scientist Dr. Samantha (Mandy) Joye, a co-Principal Investigator in ECOGIG, who is based at the University of Georgia.

“We visited three sites near the Macondo Wellhead, MC118, MC252 and MC253. Each site offered a unique opportunity to understand how seafloor communities – from macrofauna to the microorganisms living in sediments – are recovering from the Macondo discharge. While we saw increased diversity of large organisms in the vicinity of the wellhead, we saw some things at MC118 and MC253 that still have us scratching our heads. It will take some time to process all the samples so that we can tell a 2010 vs. 2014 story at MC118, and before we can quantify the differences at the MC252 and MC253 sites. All in all, we obtained a treasure trove of samples that will keep various graduate students and post docs busy for quite some time. I’m very excited to see and ponder the data as it’s coming across my desk,” Joye said.

Researchers employed a diverse array of methods for data collection, including a multibeam echosounder to identify sites of oil and gas seepage, CTDs, core samples, methane sensors, and many more, and captured some amazing images from a high definition camera attached to Alvin at their various research sites. During the Atlantis cruise, ECOGIG scientists tested out newly developed “mini-lander” technology. These mini-landers were equipped with a suite of sensors to measure conductivity, oxygen, temperature, pCO2, and methane concentration. By positioning the mini- lander system at a distance from an active gas vent, and then adjacent to it, researchers were able to document for the first time the impact of localized venting on methane concentration fields.

Researchers returned to a site they initially visited in December 2010 that was impacted by the oil spill. Of note, the site that was devoid of sea life and macrofauna on that initial visit was now occupied by a variety of organisms, including fish, shrimp, eels, sea cucumbers, and brittle sea stars, just to name a few. “It is difficult to say with certainty whether this site has returned to “pre-DWH” conditions, because we don’t have data from this site before 2010 but it’s clearly much more active biologically in 2014 compared to 2010,” Joye noted. Scientists encountered a “mysterious caramel brown layer” on the 2010 dive and found that it still remains nearly four years later. Additional research is needed to understand what comprises this layer and how it differs from the normal marine sediment layer underneath it. “The caramel layer is rich in hydrocarbons and is quite unique compared to similar samples we obtained from other sites near the wellhead in 2010. We will be quantifying the concentrations of various hydrocarbons in the layer now (2014) to compare the data to 2010. This information will help us elucidate whether the sediments are now more “habitable” compared to 2010,” Joye said.

Researchers also visited Green Canyon 600 (GC600), the “most prolific natural hydrocarbon seep in the Gulf” according to Dr. Joye, and encountered a diversity of organisms adapted to thrive in that extreme environment. One particularly interesting finding was that of black hydrates – methane hydrates that have been colored black by continuous exposure to oil – which was even a surprise discovery to Dr. Joye. A high definition camera held by Alvin- called the “Beast Cam”- provided spectacular in situ images of oil chimneys and allowed researchers to see for the first time just how diverse these structures can be in color and shape. Oil chimneys also provide homes to ice worms, as do the gas hydrate mounds.

In the hydrocarbon-rich Green Canyon 600 region, spots where sulfide- and methane-rich subsurface fluids reach the seafloor are marked by highly conspicuous sulfur-oxidizing bacteria and elemental sulfur particles that form a white surface coating on the seafloor sediments. The sulfidic seep sediments are collected using push cores, and are returned to the surface in Alvin’s sampling basket.

One of the research aims of the cruise was to conduct microbial surveys, which scientists did via core samples of microbial mats. Microbial mats form on the deep sea floor in the Gulf at gas seepages where microbes convert chemicals into biomass from the seeps, via chemosynthesis. The microbial mats encountered on this cruise were thin white layers that revealed a very rough surface upon close inspection. The mat samples were probed with delicate microelectrodes, which are highly sensitive chemical sensors employed to quantify concentrations of oxygen and hydrogen sulfide, as well as pH, over sub-millimeter scale profiles in the mats. Mat samples were also collected to determine the concentrations of methane and higher alkanes (like propane) and dissolved inorganic carbon. Microbial mats are effectively “bull’s eyes” – they mark spots of active seepage. But GC600 is home to more than microbial mats; its macrofaunal community is dominated by clams and mussels that host chemosynthetic bacteria residing in their gills. These bacteria oxidize methane, hydrogen sulfide, and potentially other compounds. Their presence at GC600 speaks to the persistent nature of oil and gas seepage at this site, because such sizeable populations of larger animals require a constant source of reduced carbon. At GC600 that reduced carbon is in the form of oil and gas.

Dr. Joye and her research crew will conduct follow up cruises to the wellhead site, which will provide scientists with a better understanding of the long-term impacts of the spill and how the ecosystem recovers and changes over time.

ECOGIG’s mission is to understand the environmental signatures and impacts of natural seepage versus that of abrupt, large hydrocarbon inputs on coupled benthic-pelagic processes in deepwater ecosystems in the Gulf of Mexico, and to chart the long-term effects and mechanisms of ecosystem recovery from the 2010 Macondo well blowout.

More in-depth stories about the researchers’ experiences can be found in their cruise blogs on the EGOGIG website: http://ecogig.org/blog-title/atlantisalvin-march-30-april-22-2014.

Some of the many research highlights can be seen on ECOGIG’s YouTube channel: https://www.youtube.com/channel/UCArX8cTbXrjK3c7VbkUig2A/videos.