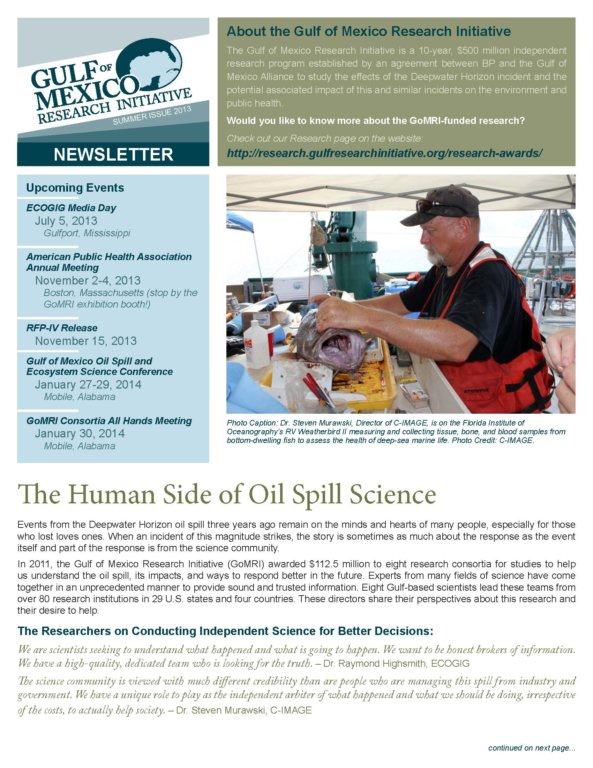 Dispersants as used in response to the MC252-spill lead to higher mobility of polycyclic aromatic hydrocarbons in oil-contaminated Gulf of Mexico sand
Alissa Zuijdgeest, Markus Huettel
PLOS One, November 2012

The weathering of oil after the Deepwater Horizon oil spill: Insights from the chemical composition of the oil from the sea surface, salt marshes, and sediments
Zhanfei Liu, Jiqing Liu, Qingzhi Zhu, and Wei Wu
Environmental Research Letters, September 2012

Check out the video created by the Consortium for Advanced Research on Transport of Hydrocarbon in the Environment (CARTHE) on the 3rd Anniversary of the Deepwater Horizon Oil Spill. The 6 minute film does an excellent job of explaining the importance of scientific research after a catastrophic environmental event and highlights the work of CARTHE. It includes commentary from CARTHE PI Tamay Ozgokmen, RSMAS Dean and Professor Roni Avissar, GoMRI Senior Scientist Chuck Wilson, and Vice- Chair of the GoMRI Research Board, Margaret Leinen.

The research is currently being carried out by eight research consortia and 19 individual/small group investigators. For more detailed descriptions of the five themes and their development, please see the GoMRI website.