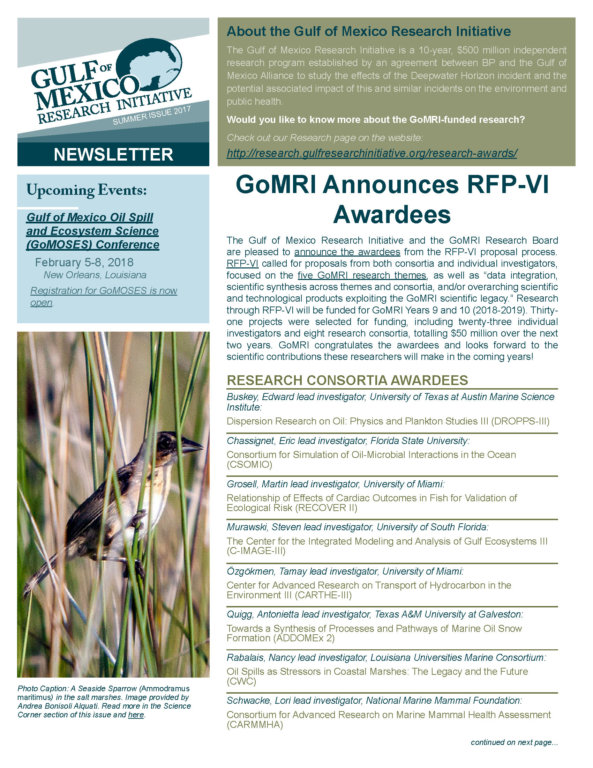 The Gulf of Mexico Research Initiative and the GoMRI Research Board are pleased to announce the awardees from the RFP-VI proposal process. RFP-VI called for proposals from both consortia and individual investigators, focused on the five GoMRI research themes, as well as “data integration, scientific synthesis across themes and consortia, and/or overarching scientific and technological products exploiting the GoMRI scientific legacy.” Research through RFP-VI will be funded for GoMRI Years 9 and 10 (2018-2019). Thirty- one projects were selected for funding, including twenty-three individual investigators and eight research consortia, totalling $50 million over the next two years. GoMRI congratulates the awardees and looks forward to the scientific contributions these researchers will make in the coming years!

In April 2017, GoMRI researchers collaborated on a field experiment focused on better understanding how oil movement and transport is impacted by river fronts. Led by RFP-V investigator Dr. Villy Kourafalou (University of Miami (UM)) and Dr. Tamay Özgökmen (UM and principal investigator of the Consortium for Advanced Research on Transport of Hydrocarbon in the Environment (CARTHE)), the experiment featured satellites, drones, research vessels, and drifters working together to track how leaking oil from the former Taylor Energy Site interacts with the open ocean and the Mississippi River Delta, called the Mississippi-Taylor- Ocean Convergence Zone. Findings from the experiment are improving scientists’ ability to more accurately track transport and oil thickness near river fronts. The field study was led by WaterMapping LLC, who, with contributions from the University of South Florida and the Norwegian Meteorological Institute, produced a video describing the experiment. Check it out here.

CARTHE also recently released another video in partnership with Waterlust. Motion of the Ocean describes the forces that move water around the planet and the variety of tools scientists use to understand and track that movement. Watch it here.

In June 2017, ECOGIG researchers embarked on a 12-day Jewels of the Gulf expedition to study the impacts of oil, methane, and chemical dispersants on deep sea coral ecosystems. The team, led by Dr. Iliana Baums from Pennsylvania State University, collected both high resolution images of the corals to document changes over time and live coral samples to study back in the lab. During the expedition, a live ROV camera feed was broadcast so the public could view what the scientists were seeing in real time. Now, that amazing footage is available on ECOGIG’s YouTube channel here. To learn more about the Jewels of the Gulf expedition, meet the scientists, and more, visit ECOGIG’s Cruise Blogs here.

NASA’s Jet Propulsion Laboratory (JPL) has been working on developing DopplerScatt, a new technology to improve the ability to measure both ocean currents and wind. In April 2017, JPL partnered with the Consortium for Advanced Research on Transport of Hydrocarbon in the Environment (CARTHE) during their Submesoscale Processes and Lagrangian Analysis on the Shelf (SPLASH) field expedition, which provided an opportunity to independently validate DopplerScatt. The collaboration proved to be extremely valuable; in addition to validating the new technology, CARTHE researchers were able to use its data to decide where to launch their drifters. Going forward JPL plans to use CARTHE’s data to improve their modeling. Read more about this exciting partnership here.

GoMRI researchers Dr. Christoph Aeppli and Dr. David Murphy have been selected as 2017 Early- Career Research Fellows, awarded through the National Academies’ Gulf Research Program. The fellowship supports the development of early-career scientists, engineers, and health professionals “to work at the intersections of oil system safety, human health and well-being, and environmental stewardship in the Gulf of Mexico and U.S. outer continental shelf regions.” Fellows receive a grant to support research expenses and professional development opportunities and also obtain guidance from a senior faculty member at their institution who serves as a mentor. GoMRI congratulates Dr. Aeppli and Dr. Murphy on receiving these awards.

Aprami Jaggi, Ph.D. candidate at the University of Calgary, GoMRI Scholar with the Center for the Integrated Modeling and Analysis of Gulf Ecosystems (C-IMAGE), and recipient of the James. D. Watkin’s Award for Excellence in Research, recently won first place in the University of Calgary’s Three Minute Thesis competition. Her presentation was titled The Ultimate Fate of Oil in the Marine Environment Following Spillage, and she talked about the research she is doing for her Ph.D., which is funded through C-IMAGE and GoMRI. See a video of her winning presentation here. Congratulations Ms. Jaggi!

GoMRI recognizes the graduate students whose vital research contributes to improving understanding about the damage, response, and recovery of the Deepwater Horizon oil spill. Candidates for this program must be graduate students who have participated in a GoMRI-funded project for at least one year, whose work is primarily funded by GoMRI, and who are working on a dissertation or thesis based on GoMRI-funded science.

The Gulf of Mexico Sea Grant Oil Spill Science Outreach Team attended the Crude Move Symposium from June 8-9, 2017 in Cleveland, Ohio. The symposium was hosted by the Sea Grant Network, the Great Lakes Commission, and the International Joint Commission and included participation from members of the U.S. and Canadian governments, industry, academia, and non-governmental organizations who came together to discuss crude oil movement in northern basins. The meeting included three panels, Different Perspectives of Risk, Relevant Lessons Learned from the Deepwater Horizon Oil Spill, and Lessons Learned from the Great Lakes-St Lawrence River Basin, as well as keynote and opening presentations. The agenda and copies of the presentations and videos can be found here.

The Sea Grant Oil Spill Science Outreach Team hosted a series of workshops in partnership with the Caribbean Regional Response Team and the University of Puerto Rico Sea Grant College Program on August 10 and 11, 2017, in Puerto Rico and the U.S. Virgin Islands. The workshops were focused on “oil spill science for healthy communities,” sharing oil spill impacts relevant to the Caribbean region, including the impacts to corals, wildlife, seafood, fishing, and tourism. More information on these workshops is available here.

The team has also recently released several new publications. Predicting the Movement of Oil describes how scientists utilize models to understand the fate and transport of oil following a spill. A Boater’s Guide to Handling Oil and Fuel Spills is the first one-pager released by the Sea Grant Oil Spill Science Outreach Team that shares pertinent information for boaters on how they can be prepared should they come across or come in contact with an oil spill. It is even printed on waterproof paper for safe storage on a vessel! A second one-page fact sheet shares an overview of the oil spill science outreach team and their program’s goals. It can be viewed here.

Smithsonian’s Ocean Portal recently released a new article in partnership with the Ecosystem Impacts of Oil and Gas Inputs to the Gulf (ECOGIG) consortium called A Brittle Sea Star May be a Coral’s Best Friend. Following the Deepwater Horizon oil spill, ECOGIG researchers began studying the impacts of oil on deep sea corals. They noticed a particular type of brittle sea star, Asteroschema clavigerum, gathering on healthy portions of the octocoral Paramuricea biscaya. Scientists wondered if the brittle sea stars were avoiding damaged portions of the coral or if they were protecting them from contamination. Further investigation into this interesting discovery is indicating to ECOGIG researchers that, in fact, the brittle sea stars are helping to protect corals from the impacts of oil by eating descending materials, including oil contaminants, so that they don’t accumulate on the corals’ branches. Find out more here.