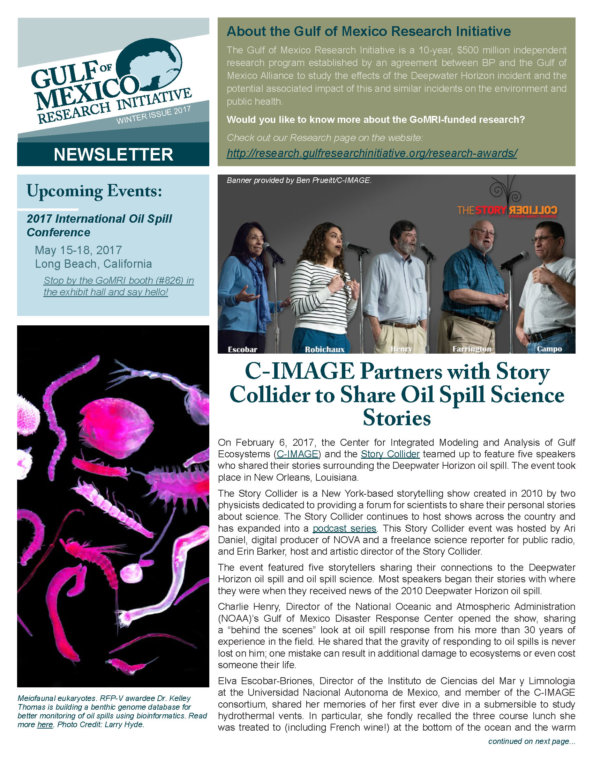 RFP-V awardee Dr. Villy Kourafalou, Research Professor in the Department of Ocean Sciences at the Rosentiel School of Marine and Atmospheric Science at the University of Miami, and her team partnered with Waterlust to create a short video on ocean eddies. The video explains that eddies are capable of transporting nutrients, heat, etc. all over the planet. An eddy in the Gulf of Mexico even helped contain some oil from the Deepwater Horizon oil spill. Check out the video here.

Scientists with C-IMAGE are using sediment cores from the bottom of the ocean to learn about changes in sedimentation rates during the Deepwater Horizon oil spill and the formation of marine oil snow sedimentation and flocculation accumulation (MOSSFA) events. Traditionally, sediment core sampling has taken place at the centimeter or half- centimeter scale, but depending on the sedimentation rate, this sampling interval is often not detailed enough to understand short- term events. Patrick Schwing and others from C-IMAGE recently published a new method of sampling sediment cores that allows for millimeter-scale resolution. Their publication includes a video that details the strategy. Check out the video and the publication here.

GoMRI congratulates Dr. Rita Colwell, Chair of the GoMRI Research Board, on two recent honors. Dr. Colwell was awarded the 2015 Mahathir Science Award, given annually by the Mahathir Science Award Foundation and the Academy of Sciences Malaysia, to scientists who have made great contribautions to the field of tropical medicine and research relating to infectious diseases and their spread. She was also selected as a National Academy of Inventors Fellow. This honor is given to academic inventors who have “demonstrated a prolific innovative spirit in creating or facilitating outstanding inventions that make a tangible impact on quality of life, economic development, and welfare of society.” Dr. Colwell has several patents in computational biology, and her company CosmosID has produced many inventions and innovations toward the advancement of DNA sequencing of the human micro biome. The diversity of these awards illustrates the breadth of Dr. Colwell’s many significant contributions to science, and the GoMRI community extends its congratulations to her on receiving these honors.

The Gulf of Mexico Research Initiative (GoMRI) is recognizing the graduate students whose vital research contributes to improving understanding about the damage, response, and recovery of the Deepwater Horizon oil spill. Candidates for this program must be graduate students who have participated in a GoMRI-funded project for at least one year, whose work is primarily funded by GoMRI, and who are working on a dissertation or thesis based on GoMRI-funded science.

Larissa Graham attended the Restore America’s Estuaries Summit in New Orleans, Louisiana from December 11-14, 2016 in partnership with GoMRI Management Team members and GRIIDC. She also moderated a session that featured several speakers from the GoMRI community called Deepwater Horizon Oil Spill Impacts to Coastal Wildlife, Fish Populations, and Wetlands in the Barataria Bay, Louisiana. A full summary of that conference can be found here.

The Team has also released several new publications in recent months. The Deepwater Horizon Oil Spill’s Impact on People’s Health: Increases in Stress and Anxiety explores how the oil spill impacted the mental health of residents of the coastal Gulf communities. Read the publication here. Frequently Asked Questions: Oil Edition features general information on oil, including what it is, how it gets released into the environment and what happens to it once it’s there, and how scientists can track it. Read the publication here.