“The most common question is, Has the Gulf of Mexico recovered from the oil spill?” Dr. Chuck Wilson, Dispatches from the Gulf 3

Dispatches from the Gulf 3 focuses on the legacy of GoMRI as the program comes to an end in 2020. The film features scientific highlights from GoMRI-funded research in the areas of ecology, physical oceanography, and chemistry. GoMRI researchers, graduate students, and Research Board members also share their experiences and reflections on the value of collaborative science and investment in outreach as exemplified by GoMRI, the creation of the next generation of scientists through the program, dealing with public skepticism of science, and the challenges faced by women in the sciences.

“The most important lesson that comes from the Gulf of Mexico Research Initiative is that it has proven to be an enormously successful collaboration among industry, academia, government, and non-governmental organizations. It provides a model for the future; when funding sources are reduced from the federal government or from state governments, it is a way to mobilize society constructively to address a very important societal problem.” Dr. Rita Colwell, Dispatches from the Gulf 3 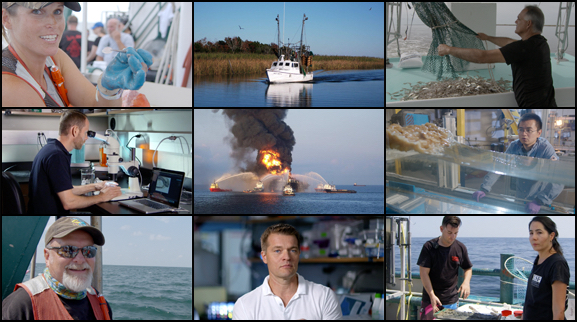 “When the big spill occurred in the Gulf of Mexico, the Deepwater Horizon spill, I received a phone call from the chief scientist, Dr. (Ellen) Williams, at BP asking if I would consider being in charge of a program to do basic research on the spill and how it could be dealt with. I agreed that it would be interesting to do this, but I said look, it really has to be independent. Fully independent. And there was no question; Dr. Williams said of course it would be independent. This would be an opportunity to carry out basic research applied to a very important national problem – namely dealing with the aspects of oil spills that were really critical to the nation. What happens to the ecology? What happens to the people who are working and living in the shore areas? And especially, what happens to those who are the fishermen, whose lives and livelihood depend on having fish, shellfish available for market and for the public as a food source. These were the kinds of questions that we wanted a curious mind of investigators to address and provide the best information that could be made available for the public. So, I agreed to form the Gulf of Mexico Research Initiative and its Research Board.” Dr. Rita Colwell, Dispatches from the Gulf 3

Dispatches from the Gulf 1 and 2 have been screened several times in recent months. Dispatches from the Gulf 1 was screened on June 8 as a part of World Oceans Day at the Mote Marine Laboratory and Aquarium in Sarasota, Florida. Dispatches from the Gulf 2 was screened at the Brookfield Zoo Discovery Center in Brookfield, Illinois on June 18 in partnership with the Consortium for Advanced Research on Marine Mammal Health Assessment (CARMMHA). Nearly 160 people attended the screening, and researchers from CARMMHA participated in a panel and answered audience questions following the film. Visit the CARMMHA website for a summary of the event here. CARMMHA also hosted a screening of Dispatches from the Gulf 2 in Charleston, South Carolina in August. Congressman Joe Cunningham and the National Oceanic and Atmospheric Administration’s National Ocean Service Acting Assistant Administrator Nicole LeBoeuf attended and participated in a panel discussion. Charleston’s mayor John Tecklenburg attended the event as well. Read more on the CARMMHA website here and on their Facebook page here.