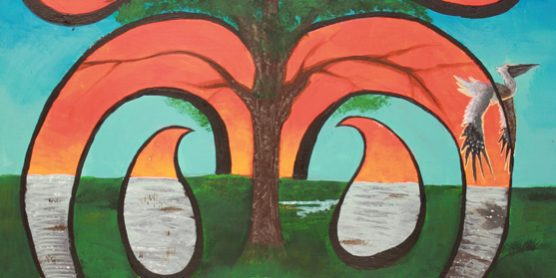 Student April Olivier’s acrylic painting, “Window of Time.” April created this during the CWC Art and Science Camp saying, “in my artwork, I depicted the deterioration of the marsh and land loss over time.” Provided by Murt Conover.

(From Fall 2014 Newsletter) Each summer, parents send their children to camp, trying to match their interests while broadening their horizons. This year, the parents of ten Louisiana students hit the jackpot: the Coastal Waters Consortium (CWC) inaugural Art and Science Camp. This camp challenged participants, engaging both their analytical and creative talents to learn about a locally-relevant and nationally-important subject matter—oiled marsh lands.

Murt Conover, the Senior Marine Educator for CWC, funded by the Gulf of Mexico Research Initiative (GoMRI), had been thinking about a combined discipline workshop such as this for years. The idea for the camp moved from dream to reality after a local artist, Karen Alice Clanton, approached Conover with questions regarding the Deepwater Horizon oil spill following her attendance at a CWC-hosted Coastal Roots workshop. Clanton, whose work focuses heavily on the Louisiana coast, and Conover soon developed a partnership, organizing a summer camp that emphasized the importance of both art and science as tools for communicating environmental concerns.

The camp took place June 8-11 in Cocodrie, Louisiana, and introduced teenagers to art and science – not as rivals but as allied subjects. The students (ranging from 8th to 12th grade) came from varying backgrounds, some with a noted interest in science and others in art. Students spent their days performing research and experiments about coastal wetlands and then translating what they learned into pieces of art.

The students were extremely enthusiastic about the camp, exceeding Conover’s expectations. One student remarked, “I came for the science, but I really learned a lot about art.” Meanwhile, another student who had attended the camp strictly to create art found that she loved working in the field and expressed that she was now considering pursuing wetlands biology once she entered college.

What began as an experiment to educate students on coastal wetlands through art and science soon became a life-changing experience. The impact of the camp on students and teachers set the stage for future CWC Art and Science camps, opening the door to not only education, but expression.

To learn more about the campers’ experiences and see photos of the students in action, check out the full story on GoMRI’s website here: https://gulfresearchinitiative.org/teens-explore-oil-spill-impacts-wetlands-science-art/.