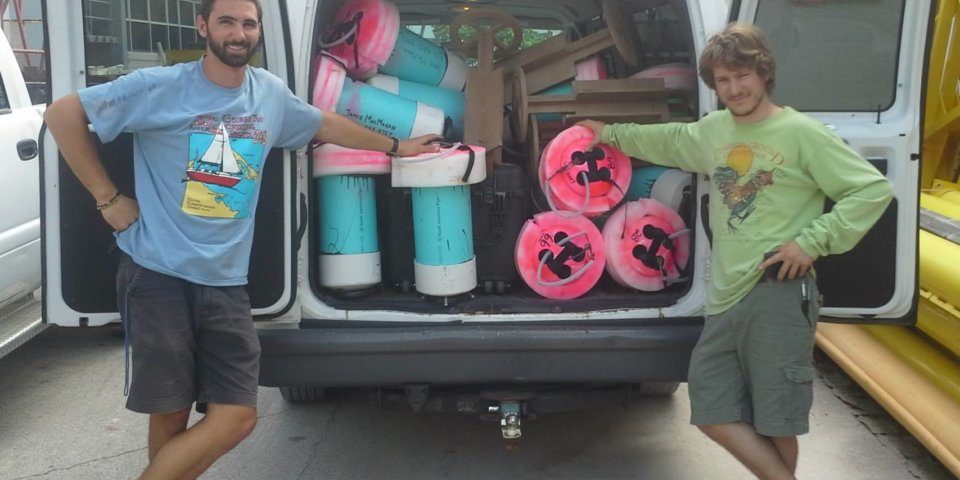 Smith and Laxague are ready to drive to Cocodrie, LA with a van full of CARTHE drifters. Photo Credit: Guillaume Novelli, University of Miami and CARTHE.

(From Fall 2013 Newsletter) The front page feature article of this issue of the GoMRI newsletter told the story of a group of scientists coming together to conduct rapid response research after the Hercules Gas Blowout. Part of that team included several graduate students from GoMRI Consortia who were recruited into action. We’re straying from our “7 questions” format this issue to talk to all five of them about their experiences.

1. What was your role in the research?

Sarah Weber (ECOGIG): Just as our six-week ECOGIG research cruise in the Gulf of Mexico was coming to an end, we received news of the Hercules natural gas rig explosion. Carried by a whirlwind of last minute preparations and planning, we found ourselves on the shores of Cocodrie, LA at LUMCON, scrambling to head out to sea yet again to sample around the rig. Due to the last minute nature of the cruise, Joe Montoya, Chief Scientist for many of the ECOGIG water column cruises, could lead only the day-long portion of the Hercules cruise. This left Joy Battles and me the opportunity to serve as Co-Chief Scientists for the remainder of the field operation. It became our responsibility to assess the Hercules blowout situation first-hand.

Nathan Laxague (CARTHE): My role in the Hercules deployment was one of execution. At first notice of the blowout, my role was to prepare the housings and power for the GPS units and attach them to the individual drifters. It was then my responsibility (along with Conor Smith) to drive the prepared drifters to Cocodrie, LA and execute the deployment operation.

Tiffany Warner (CWC): Our lab’s objective was to quantify respiration rates, which were hypothesized to be stimulated by the release of gaseous hydrocarbons into the water column, and ultimately the oxygen available in the region.

2. As a student, how did this experience relate to the work you’re doing to earn your degree?

Conor Smith (CARTHE): Currently, my research has been focused on comparing satellite retrieved surface current fields to in-situ drifter measurements. I have been involved with three field research experiments involving measurements of surface currents using various drifter designs. My research has been very exciting since I have been able to combine a remote sensing platform that seems a little intangible to me, to physical drifters that I am able to build and deploy with a group of other researcher. These two ways of measuring surface currents seem to complement each other very well.

Sarah Weber: I was an undergrad at Georgia Tech, and have been very involved with this project from the start. I am in the process of applying to Georgia Tech’s Master’s program in Biology, with plans to begin this spring. This specific research experience has directly contributed to my decision to pursue a postgraduate degree in Biogeochemsitry and has given me an exciting taste of what it’s like to lead an oceanographic expedition.

Tiffany Warner: I am working on obtaining a degree in oceanography and coastal science; as a result I am expected to learn the four core oceanography disciplines which are biological, chemical, physical, and geology oceanography, all of which we used on this research cruise. It is one thing to read this information in a book or hear about it in lecture, but to be out in the field and utilizing the methods you’ve spent countless hours learning, helps you to integrate all the parts you’ve been taught and how you can actually apply it.

3. What was the most interesting part of the experience for you?

Joy Battles (ECOGIG): I have been involved with other deployments, such as floating sediment traps, but the fact that the data were being transmitted back in real time to help choose sampling locations was really amazing.

Conor Smith: After so much effort was put forth to make the Hercules experiment possible, I really enjoyed seeing the crippled Hercules for the first time. The previous, sleepless, hectic three days of rebuilding the drifters, driving non-stop to LA from Miami, loading the vessel and then the long steam out to the deployment site had distracted me from the reality of why we were doing all of this work. As the crippled and damaged Hercules rig came into view over the horizon, I truly realized the importance of our mission and the efforts felt worthwhile.

Sarah Weber: Serving as Co-Chief Scientist with Joy was an amazing opportunity. Yes, it was  incredibly  stressful  and A LOT of work. Yes, I made mistakes and felt very under-qualified. But it was a great experience that I am so grateful to have had, simply because I learned so much from it.

4. What do you think is the most important accomplishment of this endeavor?

Joy Battles: The most important amazing part of this effort was the speed at which the response was organized and the cohesiveness with which all the parties involved worked to achieve the common goal of investigating and documenting this explosive event. Because of the group effort, much more was accomplished than any individual could have been achieved working alone.

Conor Smith: For the first time that I am aware of, an “emergency” oceanography deployment of drifters was planned and executed in less than three days. Had there been a contaminant of some sort released, our drifters would have provided one-of a kind data to predict the transport of the contaminant in the ocean.

Nathan Laxague: I’d say that the most important part of this endeavor is the precedent it sets: for marine scientists to respond quickly to a disaster in order to study it. It certainly adds an immediately practical dimension to the work.

5. What would you like the public to know about this effort?

Joy Battles: Events like the Hercules blowout impact the Gulf’s fragile ecosystems. It’s easy to overlook the effects of a natural gas leak because gas is invisible to the eye, but methane is an important contributor to global warming and  it plays an important role in oceanic food webs. As long as humans endeavor to extract oil and gas resources from the Gulf’s seabed, it is important for scientists to study the consequences of such accidental releases.

Conor Smith: As GPS become more accessible they are allowing oceanographers to collect data never before possible. We are at a very cool forefront in ocean science because we are going to be able to analyze small processes that were too small to measure before.

Nathan Laxague: I’d like the public to know that this is an exciting time in the fields of marine science- not only because of a few esoteric results benefitting the ivory tower, but also for the good of society and the world we live in at large. There are big questions to be resolved in the field of upper-ocean transport, and the answers to those questions will go a long way towards mitigating our impact upon the earth.

Sarah Weber: It’s important for the public to understand why research like this is critical. Whether we like it or not, oil and gas currently fill a very large and necessary portion of our energy needs. There are inherent risks and drawbacks associated with these resources, many of which we are very aware of, but not all of which we understand. It is our responsibility to understand the impact of oil/gas spills on the environment so that we may know how to better respond to situations like the DWH oil spill, and more effectively mitigate the effects.

Tiffany Warner: The more scientific information available the better equipped we are to make decisions in the future. Efforts such as this one demonstrate to the public our ability to engage rapidly and study the effects of disturbances that occur in the Gulf of Mexico and the importance of having long term data sets.