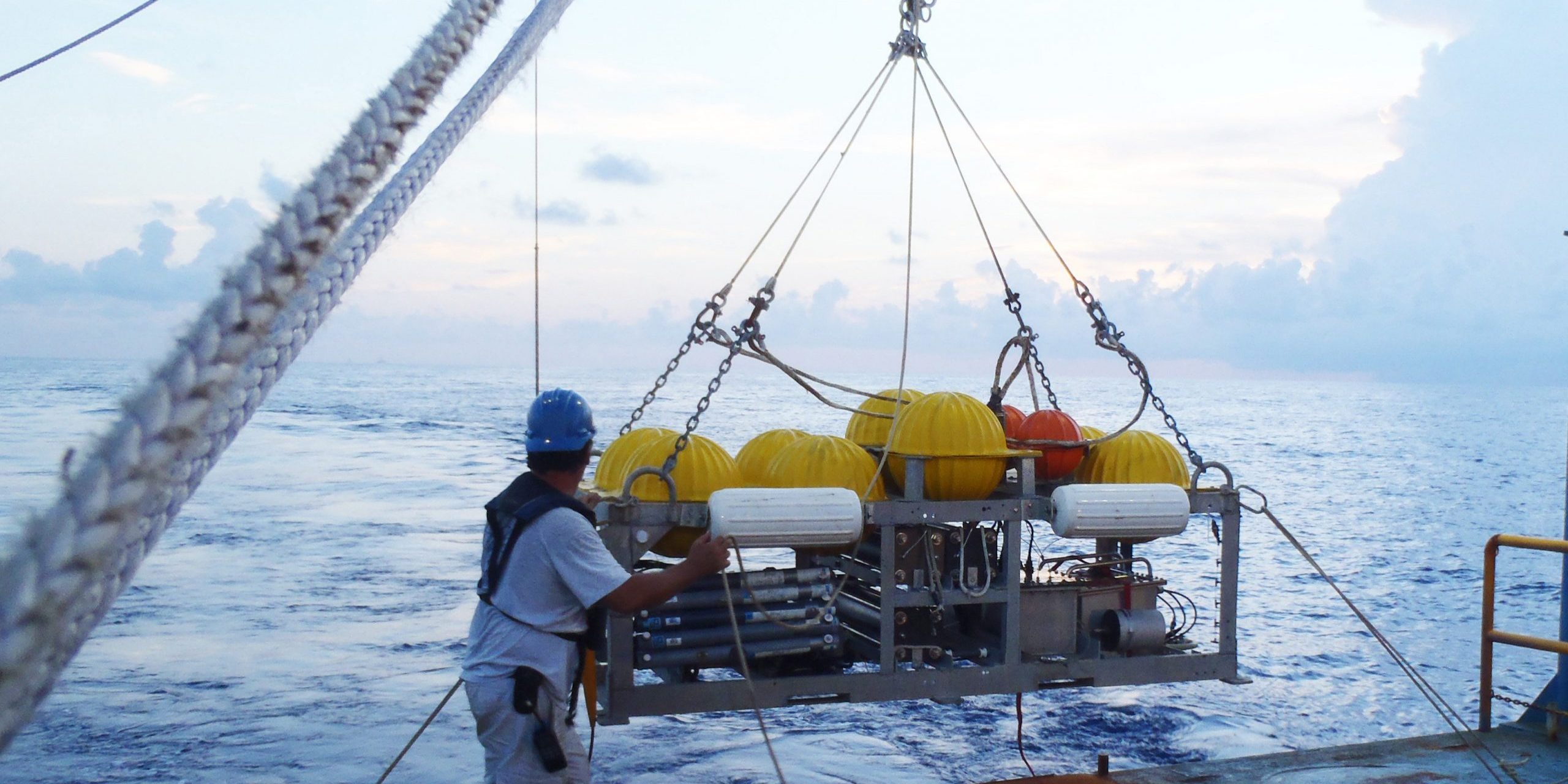 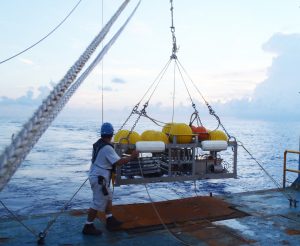 (Click to enlarge) The injection sled is equipped and ready for deployment from the RV Brooks McCall. The white bumpers provide buoyancy for recovery. The grey horizontal tubes, next to engineer Brian Guest, sample salinity to calibrate the CTD behind them. The tracer reservoirs (center) have batteries that run the injectors. The yellow “hard hats” encase hollow glass spheres, making the sled neutrally buoyant as it streams behind a cable when towed at 1 knot. (Photo credit: Laura Spencer)

Science pioneers are blazing a trail to identify pathways oil and gas use to move from deep to surface waters – an entry point for pollutants to damage shorelines and become airborne. Near the Deepwater Horizon spill site, researchers are investigating mixing patterns in the deep ocean by following the path of an inert tracer, trifluoromethyl sulfur pentafluoride, injected at about 1,100 meters depth and recording ocean conditions along the way.

Scientists are using these data to improve Gulf circulation models and understand the chemical and biological behavior of carbon compounds in deep water.  Understanding the mechanisms that drive and transform hydrocarbons and improving identification and prediction of exposure pathways are critical for responders to estimate health risks and test proposed mitigation strategies.

Had this been done earlier, the results of these experiments could perhaps have answered in real-time whether the use of subsurface dispersants during the Macondo well accident was effective. – Dr. Piers Chapman

The Gulf Integrated Spill Research (GISR) Consortium, funded by a Gulf of Mexico Research Initiative (GoMRI) award, is conducting research to understand and predict the fundamental behavior of petroleum fluids in the ocean environment and to integrate this knowledge for development of an observation, forecasting, and decision support system for oil spills in the Gulf of Mexico. Dr. Piers Chapman with Texas A&M University (TAMU) leads the consortium, composed of ten institutions across six U.S. states and Britain.

These activities serve to close the gaps necessary to manage the response to future oil spills and to responsibly continue deepwater oil development and exploration. – Dr. Piers Chapman

(Click to enlarge) Monitoring and mooring equipment is staged on the deck of the RV Pelican for deployment. (Photo credit: Steve DiMarco)

The GISR project requires field data from surface buoys, current moorings, and Langrangian drifters that all report in near-real time and link to a modeling system by data assimilation. This year, GISR had four research cruises, each building upon the work of the former, to acquire these initial data and will continue gathering data during follow-up cruises over the next two years to validate and adjust Gulf circulation and prediction models.

Dr. Steven DiMarco with TAMU was Chief Scientist on the RV Pelican for the GISR cruise in July. Dr. DiMarco described their endeavor, “The primary purpose of this cruise was to deploy six deepwater current meter moorings in the north-central Gulf of Mexico. The moorings will be deployed for a period of one year then will be serviced and redeployed for another year in 2013. Recovery will be in summer 2014.” 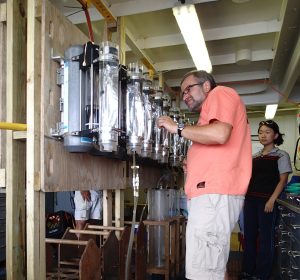 (Click to enlarge) On the RV Brooks McCall, RA Alexi Shalapyonok prepares integrating samplers for deployment to determine the initial tracer distribution. The clear plastic cylinders with metal bags take in samples as water from around the bags is pumped out with a spring-loaded piston. Student Charlene Ren assists. (Photo credit: Laura Spencer)

Dr. DiMarco and his team successfully deployed the moorings and collected supporting observations on current velocity and meteorological conditions and collected water samples for chemical analyses. The science team from TAMU included Drs. Piers Chapman, Norman Guinasso, Joe Kuehl, and Senior Marine Instrumentation Specialist John Walpert. Four TAMU graduate students were on this cruise: Laura Spencer, Heather Zimmerle, Mengran Du, and James Bounds. The hydrographic and current data they collected served as a guide for the next phase of the field work, the tracer release.

Dr. Jim Ledwell with Woods Hole Oceanographic Institution (WHOI) was Chief Scientist for a two-leg expedition on the RV Brooks McCall in late July-early August. On the first leg, the research team successfully deployed the inert tracer along with RAFOS floats at the same depth.

For the tracer injection, WHOI researchers designed and built a special sled that served several purposes:  contained the equipment that held and released the tracer material, maintained a pre-determined depth based on injecting the tracer on a constant density surface within the water column, and communicated with the ship’s navigation system about the water density. Dr. Jim Valdes and Engineer Brian Guest with WHOI prepared the RAFOS floats that drift at the level of the tracer and at the end of their mission give their trajectories, making it easier to find the tracer patch in subsequent cruises. 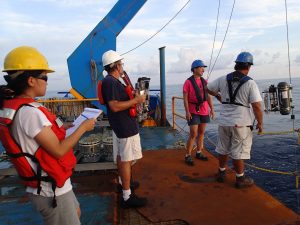 (Click to enlarge) From the RV Brooks McCall, engineer Brian Guest and RA Leah Houghton prepare an integrated sampler for deployment. RA Alexi Shalapyonok holds the next sampler to hang on the cable after the one seen is lowered about 4 meters. Student Charlene Ren notes order and placement of the samplers. (Photo credit: Laura Spencer)

On the second leg of the RV Brooks McCall cruise, the team returned to the initial injection sites and sampled the area to see how fast the tracer was dispersing, both horizontally and vertically.  The pre-programmed RAFOS floats surfaced and guided scientists to locations where they collected water samples and began the process of tracking the travel path of the tracer. Dr. Heather Furey with WHOI provided tracking assistance.

Researchers used two types of equipment to sample for tracer material after the initial injection was completed:  integrating samplers and a device descriptively named “Medusa”. Dr. Ledwell explains how the integrating samplers work, “They take in water over ten hours as they are towed along at about 1 knot.  Twenty of them are arranged in a vertical array, giving a vertical profile of the tracer that is integrated along the path.” 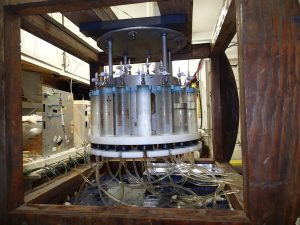 (Click to enlarge) The “Medusa” – 50 syringes and tubes emanating from a 50-port valve – are filled with water and tracer samples after it returned from being deployed from the RV Brooks McCall. (Photo credit: Laura Spencer)

Dr. Ledwell’s science team included Dr. Stew Sutherland with Columbia University and Brian Guest with WHOI and WHOI research associates Cynthia Sellers, Leah Houghton, and Alexi Shalapyonok.  On board were WHOI Summer Student Fellow Xiaoyuan “Charlene” Ren and Laura Spencer from TAMU, who served as a bridge for continuity between the two cruises. Dr. Ledwell and his team are currently (December 2012) at sea again on the RV Pelican to locate the tracer after it has been dispersing for four months. The team includes five students from TAMU: Laura Spencer, Noura Randle, Alison Smyth, Ivan Maulana, and Jordan Young.

Prior to and at the time of the tracer release, Dr. Ruoying He at North Carolina State University and Drs. Ping Chang and Raffaele Montouro at TAMU provided model simulations of tracer movement to help Dr. Ledwell and his team track the tracer. The tracer patch will expand over the period of a year, with researchers measuring its concentration and three-dimensional distribution. The results will provide information to model the movement of deep oil plumes resulting from any future deepwater accidents. 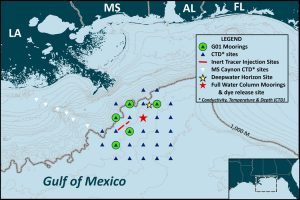 In preparation for future GISR field experiments, Dr. John Kessler with TAMU joined RV Cape Hatteras in mid-August and collected samples to study the biodegradation rates of methane. The results of this field work support plans for studies to better understand what happens when there is a deepwater release of gas.

GISR scientists are committed to helping young scientists become productive and independent researchers. The graduate students who participated in cruises this year received first-hand experience of how research is done at sea and will use data collected as part of their theses or dissertations. Their experience also helps students have a better understanding of the bigger picture of the research process, as graduate student Heather Zimmerle explains, “I typically just work with data from instruments that are already deployed. Watching the set up and deployment of these instruments helps oceanographers like me who rely on them to learn more about the ocean”.

I’ve always wanted to work on engineering projects that respond to crises and serve people and communities, and now it suddenly started to feel real. With this small peek into a highly intriguing future, I felt a little step forward towards my goals. I also started to realize my love for the experiments and observations and decided that whatever path I take, I need to be outside and work with things hands-on. The cruise made me see my passion so vividly, and I hope to take this passion and fly with it. – Graduate student Charlene Ren

For more information about tracking the tracer material, read the GISR cruise blog. For information about current forecasts and for forecast archives, access the Coupled Regional Climate Model website  which is updated every 15 minutes between 9:00am to 9:00pm CT during active forecasting days.

The GISR consortium seeks to develop an integrated response system that will predict the fate and transport of oil and gas released by accidental spills in the Gulf of Mexico. Researchers will carry out multi-scale numerical modeling (prediction), targeted field and laboratory experiments (observation) and integration of these activities within a spill response network (decision). These technologies are important both for future spill response and for risk assessment and planning of ongoing oil exploration in the Gulf of Mexico. GISR research will also benefit the scientific community studying physical, chemical and biological oceanography through the collection of new field data on large-scale circulation in the Gulf of Mexico.