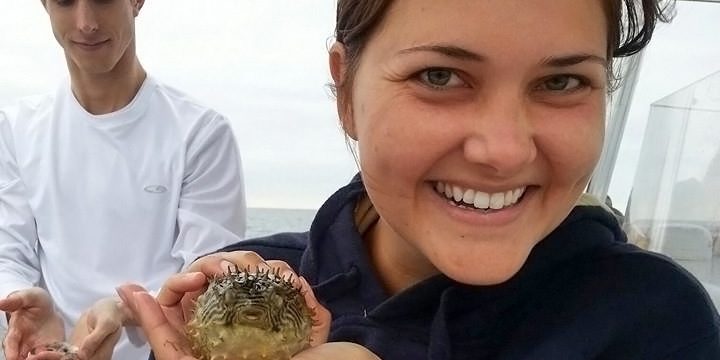 (Click to enlarge) Emily holds a burr fish from a class research trip in Tampa Bay as part of her USF Fish Biology course. (Photo provided by Emily Chancellor)

Emily Chancellor is applying her engineering and computer science background to a field that inspires her – marine science – focusing on how the oil spill may have impacted larval fish populations.

Emily recently completed her masters in marine resource assessment at the University of South Florida (USF) and is a GoMRI scholar with the C-IMAGE Consortium. She discussed her journey from engineering to marine science and what she has learned along the way.

Splitting her time as a child between Vero Beach, Florida and the Chesapeake Bay, Emily felt attached to the water, loving coastal life and fresh seafood. Her academic interests included math and computer science, so she entered the Industrial Engineering Program at Georgia Tech University. Working in logistics, procurement, and manufacturing, she continued to grow her coding skills and looked for a way to use those skills to solve environmental problems.

Emily was especially interested in the United Nations’s reported worldwide fisheries depletion. She applied to the USF marine science graduate program to study under Dr. Steven Murawski, a fisheries biologist and marine ecologist and the Director of the C-IMAGE Consortium. Emily had not taken a biology class since early high school, but Murawski saw that her math and computer background could contribute to his team’s work investigating the potential oil spill impacts on Gulf of Mexico fisheries.

Emily was grateful for this opportunity and for Murawski’s vision of how a marine science grad student with no biology background could fit in his research program. Emily laughed, “I’m his engineering experiment.”

(Click to enlarge) Emily Chancellor on board the April 2013 R/V Bellows plankton collection cruise. The USF College of Marine Science and the University of Miami at RSMAS collaboratively assessed the impact of oil on Florida marine ecosystems. (Photo credit: Tess Rivenbark)

The experiment has paid off. Emily spent three years completing an exhaustive study of the spill’s potential impact on ichthyoplankton – better known as fish larvae. She used the computer programs MATLAB and ArcGIS to map larval populations’ distributions with locations where scientists documented surface oil in the Gulf.

Emily began the project using SEAMAP data, a 30-year record of fisheries populations in the northern Gulf, and defined larval distributions for 115 fish taxa. She used these distributions to predict the proportion of larval fish by taxon that were potentially exposed to oil. These proportions often matched known spawning distributions. For example, her model showed that fourteen percent of the spring-spawning Bluefin tuna may have interacted with oil, while none of winter-spawning menhaden did.

“Larval fish are sensitive to low amounts of oil,” Emily explained, “so we can assume the proportion exposed to oil experienced lethal or sublethal effects. It is possible that we could see a similar proportion decline in future adult populations for that year class as a result.”

The University of Miami’s Dr. Claire Paris, an associate professor of ocean science and a C-IMAGE co-Principal Investigator, helped Emily extend the project to create a model to test other spill scenarios. Claire Paris’ lab used their Connectivity Modeling System to simulate two hypothetical oil spills, one occurring in the western Gulf and the other on the west Florida slope, and estimated the proportions of at-risk fish larvae. Both simulated scenarios showed higher proportions of exposure and, therefore, greater potential fisheries’ impact than the Deepwater Horizon spill. Emily’s model will be a useful tool to gauge possible impacts to larval fish in other hypothetical or future oil spills.

(Click to enlarge) Emily, wearing the safety gear sometimes necessary for fieldwork, hopes her research will contribute to a better understanding of how Gulf oil interacted with larval fish. (Photo provided by Emily Chancellor)

“I’ve been lucky to attend three GoMRI oil spill conferences,” said Emily, who gave an oral presentation on her research at the 2015 meeting. She said that preparing for and giving that presentation was a big challenge, but it was also a great help for preparing her master’s thesis defense. Coming from a technical background, she never considered herself a strong writer. Murawski and others helped improve her skills, assisting with revisions of her presentations and thesis until she felt both accurately portrayed her work.

Emily credited other scientists as a key to her success, such as Dr. Joanne Lyczkowski-Shultz at NOAA who went to great lengths helping her interpret the SEAMAP data.

Emily recommended that undergraduates interested in advancing their science education should research the specific advisors as much as the programs. “Look at the work he or she has done – does it interest you? You will be working on their projects, so it’s important that your interests mesh,” Emily said. She added, “I got so lucky with Dr. Murawski – he’s the best advisor I could have hoped for.”

Emily will soon start work on her Ph.D. at USF with Murawski helping to design her new project. She wants to continue using her math and computing skills to better understand the current state of the Gulf. When she finishes her doctorate, she plans to work in government or private industry or wherever she can best focus on preserving our marine resources.

Steven Murawski said that he is very happy with his decision to take a chance on such a non-traditional student. “Emily has some unique skills honed from her engineering background that fit well with our desire to quantify oil spill impacts,” he said. “Not many people in this life decide to make such radical changes in their professional goals and aspirations. Emily has done exceptionally well in coming up to speed as an ocean scientist while applying her engineering skills to the problems she has researched.”

He continued, “I very much look forward to working with Emily as she completes her education and all it portends for her future as an ocean scientist. The sky is the limit for her – or I should say the ocean!”

(Click to enlarge) Emily (far right) and other C-IMAGE student researchers share their research with the public at the St. Petersburg Science Festival. (Photo provided by the C-IMAGE Consortium)

The GoMRI community embraces bright and dedicated students like Emily Chancellor and their important contributions. The GoMRI Scholars Program recognizes graduate students whose work focuses on GoMRI-funded projects and builds community for the next generation of ocean science professionals.

This research was made possible in part by a grant from The Gulf of Mexico Research Initiative (GoMRI) to the Center for Integrated Modeling and Analysis of Gulf Ecosystems (C-IMAGE).