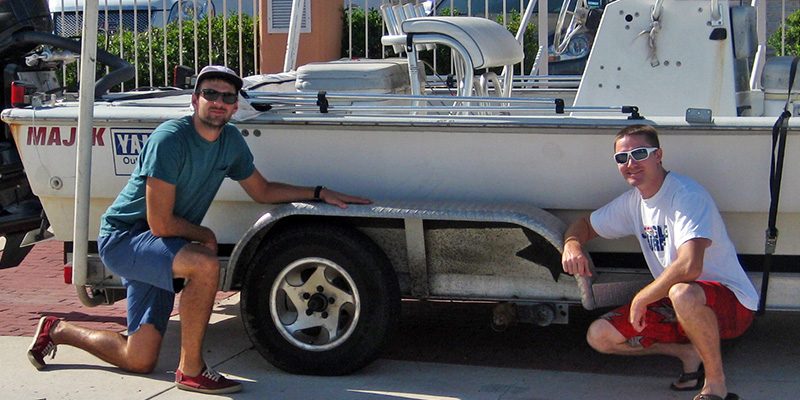 (Click to enlarge) Dave Christiansen (left) and Garrett Kehoe (right) pose with their beloved but shambling boat trailer, which lost two of its four wheels during a data collection trip from Austin to Galveston Bay. (Photo credit: Matt Rayson)

He got his start monitoring Galveston Bay’s complex flow patterns as a precautionary oil spill measure. Dave’s hard work has taught him innovative problem-solving and has been applied to real-world oil spill response.

Dave was an Engineering master’s student at the University of Texas at Austin and a GoMRI scholar with GISR. Now a municipal water systems planner, he reflects on his graduate research challenges and the recent applications that made it all worthwhile.

In high school, Dave took as many math classes as possible, partly because he actually enjoyed them but also because his “mom wouldn’t have it any other way.” After starting college, Dave realized the Computer Graphics Technology program didn’t allow him to use his passion for math enough. Feeling that civil engineering was a better match, Dave switched his major after just one semester at Purdue.

There, he discovered an interest in hydrological engineering, which concerns the flow and transportation of water, and became a research intern under Dr. Cary Troy, who studies environmental fluid mechanics in the Great Lakes. Dave enjoyed the work so much that he began considering graduate research. “With input from Dr. Troy, I emailed professors at various universities about my interest and somewhat-limited experience in the field. My main goal was conducting fieldwork and collecting data.”

Dave received a response from environmental and water resources engineer Dr. Ben R. Hodges with the University of Texas at Austin, who believed Dave was perfect for his GISR research creating more accurate Gulf of Mexico oil transport models. A single visit convinced Dave that studying the circulation of Gulf Coast bays was for him. He moved to Austin in January 2012 and began his master’s research collecting water velocity data.

Understanding how water moves can help predict the path and speed of spilled oil. To track the circulation patterns of Galveston Bay, Dave measured water velocity using an acoustic Doppler current profiler (ADCP), which bounces sonar pulses off of suspended microscopic particles in the water column and uses the Doppler Effect – the change in a wave’s frequency based on the proximity of the wave source and the observer – to measure their velocity. The GISR team aimed to describe the flow of the entire Bay, a massive goal that Dave called “absolutely petrifying.” However, when reviewing the collected data, he noticed an interesting flow pattern near a dredge spoil island adjacent to the Houston Shipping Channel and made it the focus of his master’s thesis. “I spent as much time fixing our data-collection boat as I did collecting the data itself,” he jokes. “But, in the end, we collected great data that helped calibrate Stanford’s Galveston Bay oil spill model in anticipation of future spills.”

That “future spill” became a reality in March 2014, when a punctured oil barge released about 168,000 gallons of oil into Galveston Bay. This spill demonstrated to Dave how important research like his can be, “Oil spills negatively affect many people and wildlife. If we can decrease that damage by improving response, then we are doing a great service.” Dave’s work initially involved collecting data from multiple bays along the Texas and Louisiana Gulf Coast; however, a lack of resources forced the team to focus solely on Galveston Bay.

Conducting fieldwork taught Dave that although difficulties can be frustrating, they also make completing the task that much more satisfying and have made him a quick-thinker. “Equipment malfunctions happen with fieldwork, and when you’re on a small boat mid-bay, there aren’t many tools at your disposal,” says Dave. “But, I think any engineer would say those situations are the most interesting. We all secretly, or not-so-secretly, want to be MacGyver and be able to resolve unexpected complications under stressful conditions without the proper tools.”

Being a member of the GISR research group has allowed Dave to learn from other scientists. At the 2013 Gulf of Mexico Oil Spill and Ecosystem Science Conference, Dave heard discussions between the world’s top oceanographic modeling and data collection researchers, “I heard a lot of new terms that I wrote down and Googled later. I simply became more aware of the research other people were doing, which was very enlightening.”

Dave’s experiences have made him appreciate the people in his life even more. “I’m thankful for my professors, Dr. Troy and Dr. Hodges, for introducing me to such an interesting field and for my wife and family, who have been so supportive throughout my learning experience. GoMRI and GISR mean a lot to me for funding my research.”

Dave has since graduated with a Master’s of Science in Engineering. He currently lives in Austin and works for Freese and Nichols, Inc., a 500-employee civil engineering consulting firm where he conducts master planning for municipalities’ water distribution and wastewater collection systems. Dave believes that the dwindling water supply in Texas is a problem that must be addressed with innovative engineering very soon, a problem he wants to help solve.

Dr. Hodges praises Dave’s dedication and persistence in the face of setbacks. Much of Dave’s time was spent gathering velocity via ADCP, a challenging yet essential task that often meant transecting the shipping channel for hours under some very tough conditions. Hodges said, “Dave was amazingly resilient and showed great ingenuity when things went wrong, persevering despite instrument failures and software glitches.” He also praised Dave’s “excellent” job conducting and teaching fieldwork. “It was great having a graduate student that I could just hand a field project to, say ‘go do it,’ and know it would get done.”

The GoMRI community embraces bright and dedicated students like David Christiansen and their important contributions. The GoMRI Scholars Program recognizes graduate students whose work focuses on GoMRI-funded projects and builds community for the next generation of ocean science professionals.

This research was made possible in part by a grant from BP/The Gulf of Mexico Research Initiative (GoMRI) to the Gulf Integrated Spill Research Consortium (GISR). The GoMRI is a 10-year independent research program established to study the effect, and the potential associated impact, of hydrocarbon releases on the environment and public health, as well as to develop improved spill mitigation, oil detection, characterization and remediation technologies. An independent and academic 20-member Research Board makes the funding and research direction decisions to ensure the intellectual quality, effectiveness and academic independence of the GoMRI research. All research data, findings and publications will be made publicly available. The program was established through a $500 million financial commitment from BP. For more information, visit https://gulfresearchinitiative.org/.