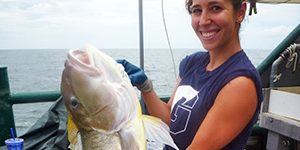 To understand her findings, Susan has found that working with different scientists such as chemists, geologists and physicists is not only helpful, it is imperative.

Susan is a master’s student at the University of South Florida and is a GoMRI scholar with C-IMAGE. Susan reflects on her ambitious entry into oil spill research and her hopes for the future.

Susan Snyder pursued her field with laser focus. Her interest in the environment began as a kid living on Lake Ontario where growing environmental problems, such as invasive species and algal blooms, led her to consider studying man-made environmental issues, particularly pollution. In her search, she found that professor Steve Murawski with the University of South Florida was leading a research project on the Deepwater Horizon oil spill. She emailed him and asked to be his student. Susan believes that “when you’re looking for a graduate school, you don’t choose a school; you choose the research you want to do and find the professor doing it.” To her delight, he responded, set up a meeting, and as a result, she began working with C-IMAGE. Reflecting on her journey from inexperienced undergrad to knowledgeable researcher, Susan contemplates how different her life might have been if she hadn’t pursued oil spill research. “I took a big risk emailing a professor in Florida asking if I could be his student,” she says, “and it all paid off!”

Susan studies metabolites found in Gulf fish bile to learn if the fish ingested polycyclic aromatic hydrocarbons (PAHs). “It’s kind of like if you were drinking alcohol, your body would metabolize those compounds into a marker that says you’ve had alcohol,” she explains. By studying fish bile metabolites, she can quantify the relative level of oil exposure. Susan and her fellow researchers are studying three species: red snapper, king snake eel, and golden tilefish, all of which live in or near the ocean floor. The team chose tilefish to look for oil exposure “because they dig burrows with their mouths and constantly ingest sediment,” explains Susan.

So far they are seeing that tilefish exhibit much higher PAH levels than the other two species. They are also seeing a decline in PAH levels over time for both red snapper and king snake eel but not for the tilefish. Seeing the study’s hypotheses confirmed was a magical moment for Susan. “We thought the tilefish would have higher levels,” she says, “but through my lab work and results, we actually saw that the levels in the golden tilefish were five to ten times higher than the other species. It was like ‘Wow! This is actually happening!’”

Susan presented her work at the 2014 Gulf of Mexico Oil Spill and Ecosystem Science Conference and the 2014 ASLO Ocean Sciences Meeting in Honolulu. While she loves going to conferences and having discussions with the researchers whose papers she had read, Susan said that one of her most treasured experiences was that, after presenting her own research, she became the person being asked questions.

Susan is encountering a variety of marine life while on C-IMAGE research cruises collecting fish samples. Some interesting creatures often come up when the crew pulls in their catch. “Sometimes it’s a snapper and other times it’s a tiger shark or a manta ray,” explained Susan. “I love seeing what’s out there.”

Through her work with C-IMAGE, Susan realizes how important different sciences are to conducting successful research. While her degrees are in Biology, much of Susan’s current work relies heavily on chemistry and lab analyses. “I went to college to study fish and pollution, but what I do on a daily basis is often completely chemistry,” Susan says. “I’ve learned a lot of ‘how to be a chemist’ and the different quality assurance procedures that come with it.” With this experience, she says “I have learned how connected everything is. I need to understand the chemistry, the geology, and the physics to understand my results with the fish,” explained Susan. Speaking about the multiple issues surrounding oil impacts, she said, “You can’t work on your own. You can’t do a thesis or publish research just by being a biologist and talking to biologists. It all works together.”

Susan just finished her second year of graduate school. After she completes her master’s thesis on her fish bile research, she plans to pursue a Ph.D. working with C-IMAGE. Susan intends to expand her research to include other fish tissues (muscle, liver, fish mucus, etc.) for information about oil toxicokinetics and sublethal effects.

Regarding her success and personal growth, “I’m a first-time scientist. I came here straight from undergrad, and it has been so great working with GoMRI and C-IMAGE,” says Susan. “It’s had a big impression on me. I feel so connected to other scientists and to the bigger picture that it’s defined both my science and the way I’ve become a scientist.”

Dr. Dana Wetzel said, “I am very proud of Susan—she has accomplished a lot and has been an extremely hard working student who quickly learned new techniques for research and adapted them for her work. I look forward to Susan’s discoveries!”

Dr. Steve Murawski, excited to continue his work with Susan, said, “I cannot say enough good things about her! She has apassion for learning and has devoted much of the past two years to honing her analytical chemistry and fish biology skills. She has blossomed into a very competent researcher.”

The GoMRI community embraces bright and dedicated students like Susan Snyder and their important contributions. The GoMRI Scholars Program recognizes graduate students whose work focuses on GoMRI-funded projects and builds community for the next generation of ocean science professionals.

Visit the C-IMAGE web site to learn more about their work.

This research was made possible in part by a grant from BP/The Gulf of Mexico Research Initiative (GoMRI) to the Center for Integrated Modeling and Analysis of Gulf Ecosystems (C-IMAGE). The GoMRI is a 10-year independent research program established to study the effect, and the potential associated impact, of hydrocarbon releases on the environment and public health, as well as to develop improved spill mitigation, oil detection, characterization and remediation technologies. An independent and academic 20-member Research Board makes the funding and research direction decisions to ensure the intellectual quality, effectiveness and academic independence of the GoMRI research. All research data, findings and publications will be made publicly available. The program was established through a $500 million financial commitment from BP. For more information, visit https://gulfresearchinitiative.org/.