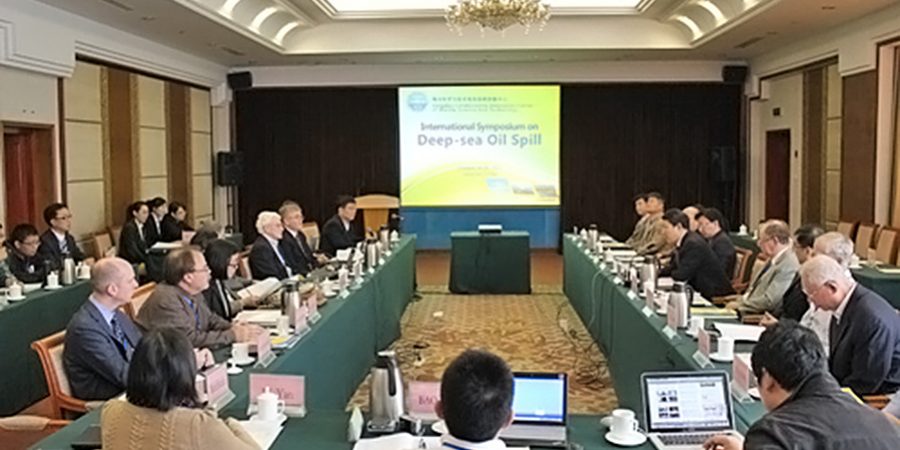 Scientists funded by the Gulf of Mexico Research Initiative (GoMRI) played a major role in an International Symposium on Deep-sea Oil Spill and Offshore Oil-Gas Exploitation held in Qingdao, China on October 28 to 29, 2013.

The Cooperative Innovation Center of Marine Science and Technology of the Ocean University of China (OUC) hosted the event and invited Dr. Piers Chapman, Director of the Gulf Integrated Spill Research Consortium (GISR) at Texas A&M University, to co-chair the symposium with Dr. Wensheng Jiang, Dean, College of Environmental Science and Engineering, OUC.

Over 40 scientists, agency representatives and top executives of oil companies from China, USA, and Australia came together and shared their experiences of oil spills and related research, using the Deepwater Horizon incident as a case study. The purpose of this gathering was to understand the developing state of and issues related to offshore oil-gas exploitation and deep-sea response efforts. During the event, participants discussed a wide range of topics related to oil spills such as management, pollution, prediction modeling, contingency plans, and response mechanisms.

Chapman explained that China is becoming very active in ocean observation, with a large monitoring program in development in the South China Sea and additional monitoring planned for the East China Sea. China has been drilling shallow wells in the Bohai Gulf and East China Sea, suffering at least two major spills of >1,000 tons oil in the process. In May 2012, the Chinese began drilling deep offshore in the South China Sea. China has a national spill response group, which has plans to expand considerably and grow their capability so they can respond to a major deep-water blowout.

Following the formal talks there were discussions about major problems and unknowns. Chapman explained, “While there are many similarities between the East and South China Seas and the Gulf of Mexico (e.g., both regions suffer from tropical storms), there are also major differences, such as ice in the Bohai Gulf, much larger tidal ranges than in the Gulf of Mexico, and internal solitary waves, so mixing processes may be very different.” Chapman noted that the proposed South China Sea monitoring program, which includes 40 deep moorings, could greatly improve information on the physical oceanography of this area. Other points discussed included the possible use of inert tracers, integrated model suites, and increasing chemical analytical capability.

(Click to enlarge) Rob Hetland (Professor of Oceanography at Texas A&M University) and Dr. Wensheng Jiang (Dean, College of Environmental Science and Engineering, OUC and Co-Chair of the symposium) discuss Hetland’s model of the Gulf of Mexico. (Photo courtesy of Ocean University China)

Dr. Edward Buskey, Director of the Dispersion Research on Oil Physics and Plankton Studies (DROPPS) consortium at the University of Texas at Austin presented: Physical and chemical dispersion of crude oil, and effects of dispersed oil on marine zooplankton. And, Chapman presented a paper on behalf of Dr. Samantha Joye with the Ecosystem Impacts of Oil and Gas Inputs (ECOGIG) consortium: Studying natural seeps in the Gulf of Mexico and quantifying recovery of pelagic and seafloor environments to the Macondo blowout.

Chapman commented on the wonderful hospitality of their hosts and expressed hope that “we can assist the Chinese as they confront the difficulties of deep offshore drilling around their coast.” The OUC Vice President, Huajun Li, expressed hope for collaboration and exchange between oceanographers and marine-related industries to improve understanding about the important issues in research on deep-sea oil spills and contribute to environmental protection and sustainable development of marine industries. He noted that the success of this event has witnessed the coming into a new era of collaboration and synergy with domestic and global institutions and enterprises.

This research was made possible in part by a Grant from BP/The Gulf of Mexico Research Initiative (GoMRI) to the Gulf Integrated Spill Response (GISR) consortium, the Dispersion Research on Oil Physics and Plankton Studies (DROPPS) consortium, and the Ecosystem Impacts of Oil and Gas Inputs (ECOGIG) consortium. The GoMRI is a 10-year independent research program established to study the effect, and the potential associated impact, of hydrocarbon releases on the environment and public health, as well as to develop improved spill mitigation, oil detection, characterization and remediation technologies.  An independent and academic 20-member Research Board makes the funding and research direction decisions to ensure the intellectual quality, effectiveness and academic independence of the GoMRI research.  All research data, findings and publications will be made publicly available.  The program was established through a $500 million financial commitment from BP.  For more information, visit https://gulfresearchinitiative.org/.