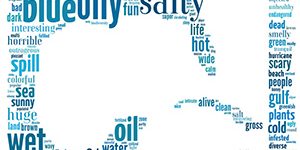 (Click to enlarge) Middle school students described the Gulf of Mexico using one word. The size of the word represents the frequency of it as an answer. (Wordle image created by Amelia Vaughan)

Scientists asked middle school students from the Florida Panhandle to list words that describe the Gulf of Mexico, and the students gave some telling responses. Of course, they frequently used general terms such as “blue,” “salty,” and “wet.” But one specific word landed in the top five: “oily.” In addition to the many positive descriptors about the Gulf – “beautiful,” “tranquil,” and “diverse” – students also shared a number of negative ones —“dangerous,” “polluted,” and “ignored.”

Historically, research about the health of the Gulf of Mexico has been lacking. However, understanding of marine and coastal ecosystems in the Gulf is expanding rapidly as a result of resources committed after the 2010 Deepwater Horizon oil spill. In order to share this increasing knowledge with K-12 students, scientists with the Deep Sea to Coast Connectivity in the Eastern Gulf of Mexico (Deep-C) Consortium initiated Scientists in the Schools, a program that brings an overview of ongoing Gulf research directly into the classroom.

(Click to enlarge) Deep-C’s Amelia Vaughan looks on as a student performs an experiment using plankton models to test for neutral buoyancy. (Photo courtesy of Deep-C)

Eight scientists from Florida State University (FSU) and the University of West Florida (UWF) visited schools in Tallahassee and Pensacola to interact with and help students understand the long-term effects of the spill. Based on a highly successful program at Vanderbilt University, the Deep-C Scientists in the Schools effort has already reached more than 300 students in its first year. Participating scientists are using a combination of presentations and hands-on activities about physical oceanography, ecology, and the impact of humans on the Gulf of Mexico.

According to Deep-C Coordinator Tracy Ippolito, “Two of our primary outreach goals are to increase the number of students interested in STEM [Science, Technology, Engineering, and Math] fields and to support teachers with science-based content for the classroom. The Scientists in the Schools program does both.” She added, “We are fortunate to have many scientists who appreciate and gladly participate in education and outreach activities.”

(Click to enlarge)
In one activity, a middle school student shows off her plankton model before putting in water to test for neutral buoyancy. (Photo credit: Amelia Vaughan)

Caroline Johansen is an oceanography graduate student at FSU and a participant in this outreach program. When she teamed up with Deep-C Ocean Sciences Educator Amelia Vaughan in Julie Sear’s classroom at the School of Arts and Science in Tallahassee, she really did not know what to expect in terms of what the kids were capable of understanding. She only knew she wanted to make science “cool.” So after Vaughan’s introduction, Johansen showed close-up pictures of the ocean floor and asked the students if they could identify what they saw. Imagine her surprise when a boy told her that the white specks in the images were bacteria that fed off of hydrocarbon seeps to make the sugars they need to survive.

Thrilled with the response, Johansen reported, “Mind you, this boy was maybe 11 years old, but he led me into the discussion of chemosynthesis. Each class period I taught had at least one or two students who left me thinking, ‘Wow, a future scientist in the making!’”

In follow up surveys, the students overwhelmingly reported that the hands-on experiments were their favorite part of the visits, especially activities with oil and plankton. They also thanked the presenters for “carefully explaining what needed to be explained” in the classroom and for “trying to help the animals and clean the water” with their research. Results from pre- and post-tests of the material showed a 47% increase in Gulf of Mexico literacy for students who engaged in the programs.

“K-12 students rarely get an opportunity to see real science – and scientists – in action. To foster interest in STEM careers it is so important for students to make connections between the science that is being conducted and their own lives,” Vaughan explained. She added, “Not only does this benefit the students, but it also helps scientists to synthesize their research into a message that is understandable and relatable to the general public. It is also fun!”

Studies indicate that the more school-age students are exposed to working scientists, the more likely they are to want a career in a STEM field when they graduate. This year, three additional schools have asked to participate in Deep-C’s program. Clearly Scientists in the Schools is a win for everyone involved – for the schools, teachers, scientists, and especially for the future scientists sitting in the classroom.

For more information about this program, go to the Deep-C Scientists in the Schools web page. Read more about Caroline Johansen and her experiences with this program in the article Sharing Science with Students.

This research was made possible in part by a grant from BP/The Gulf of Mexico Research Initiative (GoMRI) with the Deep Sea to Coast Connectivity in the Northern Gulf of Mexico consortium (Deep-C). The GoMRI is a 10-year, $500 million independent research program established by an agreement between BP and the Gulf of Mexico Alliance to study the effects of the Deepwater Horizon incident and the potential associated impact of this and similar incidents on the environment and public health.