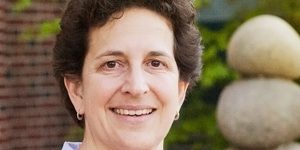 The Gulf of Mexico Research Alliance congratulates Dr. Kate Freeman, professor of geosciences at Penn State University, on her recent election to the National Academy of Sciences (NAS). Freeman joins Dr. Rita Colwell, Chair of the GoMRI Research Board, as a NAS member.

Abraham Lincoln founded the NAS and charged its members with providing objective advice on matters of science and technology. An invitation to join its ranks is one of the highest honors that can be bestowed upon an American scientist or engineer.

“Getting elected to the NAS was a surprise, a very happy one,” said Freeman.  “I am so humbled to join such an august group of scientists.  I am deeply grateful to the outstanding mentors I have had early in my career and to the fantastic students, colleagues and collaborators along the way.”

A member of the Center for Integrated Modeling and Analysis of Gulf Ecosystems (C-IMAGE) consortium, Freeman specializes in using microbial biogeochemistry to study oil, microbes, and sediments in the Gulf of Mexico. Currently she is working with other C-IMAGE researchers to identify the molecular and isotropic composition of BP oil deeply submerged in the Gulf.

Freeman stated that she sees her membership as an opportunity to serve the nation, saying, “I am currently reflecting on how best to engage in the opportunities provided through the NAS.  I hope my efforts can be directed to advance excellence in science and education, to support better stewardship of our planetary habitat, and to foster diversity in the scientific community.”

In 2013 the American Geophysical Union also invited Freeman to join its ranks as a Fellow. In addition to these two new honors, she is already a Fellow of the American Academy of Microbiology, the Geochemical Society and European Association of Geochemistry, the Guggenheim Foundation, and the Canadian Institute for Advanced Research.

The Gulf of Mexico Research Initiative (GoMRI) funds the Center for Integrated Modeling and Analysis of Gulf Ecosystems (C-IMAGE) consortium research program.  GoMRI is a 10-year, $500 million independent research program established by an agreement between BP and the Gulf of Mexico Alliance to study the effects of the Deepwater Horizon incident and the potential associated impact of this and similar incidents on the environment and public health.