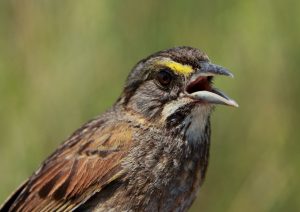 (Click to enlarge) The Seaside Sparrow spends its entire life on salt marshes, including breeding areas known to be affected by the Deepwater Horizon oil spill.

When the Deepwater Horizon disaster leaked an estimated 4.9 million barrels of oil into the Gulf of Mexico, many researchers feared that coastal ecosystems would never be the same.

(From LSU Research News) — In May 2010, as part of the Gulf of Mexico Research Initiative, or GoMRI, BP committed $500 million over a 10-year period to create a broad independent research program to investigate the impacts of the oil, dispersed oil, and dispersant on the ecosystems of the Gulf of Mexico and affected coastal States. The broad context of the project is to improve our fundamental understanding of the dynamics of environmental disasters.

As a part of a multi-institutional research task to study marsh organisms and food webs in the wake of the BP Deepwater Horizon Oil Spill, LSU’s Phil Stouffer, professor of conservation biology in the School of Renewable Natural Resources, or RNR, and Sabrina Taylor, assistant professor in RNR, are studying the effects of the oil spill on Seaside Sparrows. Stouffer and Taylor, in conjunction with former RNR post-doc Stefan Woltmann and current post-doc Christy Bergeon Burns, are working under the umbrella of the Coastal Waters Consortium, or CWC, funded by GoMRI. The Consortium came together in early 2012 to assess the chemical evolution, biological degradation and environmental stresses of petroleum and dispersant within Gulf of Mexico coastal and shelf ecosystems. 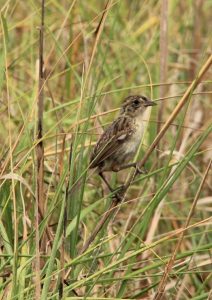 “There are other BP-funded consortia that do all kinds of research related to the spill, but we are really the only one looking at coastal processes on the marsh,” Stouffer said. “There is a lot of physics involved in these other research projects, a lot of chemistry and geology. But we are the closest to plants and animals on the interface. We are some of the only researchers, along with LSU’s Dr. Linda Hooper-Bui, dealing with something that is entirely terrestrial.”

Stouffer and Taylor are studying the effects of the oil spill on Seaside Sparrows, a bird species that spends its entire life on salt marshes, including breeding in areas known to be affected by the spill. Stouffer and Taylor are examining density, diet, movements, nest success and gene expression patterns of Seaside Sparrows in contaminated and control marsh areas. The group is using genetic analysis tools to determine expression of a gene in sparrows involved in detoxifying contaminants in oil.

“We want to see whether there has been an effect of the oil spill on Seaside Sparrows,” Taylor said. “We are using a number of approaches to do that. One is to look at reproductive success and the expression of a gene that starts functioning in the presence of Polycyclic aromatic hydrocarbons, or PAHs, which is one of the toxic components of oil. This gene could be active in the liver of sparrows that are exposed to toxic compounds.”

Stouffer and Taylor are working to expand knowledge of terrestrial food web effects of oil spills. While Seaside Sparrow biology is poorly understood, this bird species could be sensitive to environmental disturbances and used as an “indicator species” to assess the effects of oil spills, climate change, sea level rise and overall land loss in marsh ecosystems. Seaside Sparrows, though not currently endangered, are a part of a larger group of birds that have shown vulnerability to changing environments. One subspecies, the Dusky Seaside Sparrow, has gone extinct, and another, the Cape Sable Seaside Sparrow, in the Everglades, is endangered.

“These birds live on the edge,” Stouffer said. “They live in salt marsh. Sea-level rise associated with climate change, increasing storm intensity, marsh loss through subsidence – all of these processes are going to hurt this bird.”

Stouffer’s group is looking at movement of Seaside Sparrows across the northern Gulf, to determine how much they are exposed to oil-contaminated sites. They are investigating population levels and reproductive success of the species. Burns, a current post-doc in the group, plans to look at how hormone levels in the species may change in response to the oil exposure.

“The idea is that oil is a stressor,” Burns said. “We are looking at a gene in Seaside Sparrows involved in detoxification. The idea is that if the birds’ bodies are focusing on detoxing, or dealing with this physiological stress of oil, then we might see hormonal effects, with elevated stress hormones like corticosterone. Reproductive hormones might be suppressed in Sparrows in oiled areas, because the birds are directing time, resources and energy away from reproductive success toward dealing with oil stressors. Reproductive hormones can be lower in a stressful situation because they direct resources to reproduction, which wouldn’t necessarily be the right choice if you are a Sparrow in a stressful situation.”

The group’s work will provide important information for conservation planning in the face of likely oil spills and certain marsh loss. One of the main goals of the Coastal Waters Consortium is to look at marsh processes overall, regardless of oil effects, and how different stressors affect the marsh. Stouffer and Taylor work with other professors at LSU, including Linda Hooper-Bui, associate professor of entomology, and Gene Turner, LSU Distinguished Research Master and Shell Endowed Chair in Oceanography and Wetlands Studies, to look at multiple levels of marsh food webs and the effect of oil on these systems.

“We are hoping that in this second year of data collection, we can begin understanding how the effects that the entomologists are seeing relate to effects that we will see in the birds,” Burns said. “We are trying to understand how the food web as a unit is responding to the oil.”

According to Stouffer, if the productivity of insects is lower in oiled areas of the marshes, as Hooper-Bui has found in her research, then Seaside Sparrows might have to resort to gaining nutrients from lower on the food chain in order to get enough energy. Stouffer’s group is trying to synthesize data from Turner’s research on the plant level of the marsh, and Hooper-Bui’s research on the insect level, with their research on terrestrial birds such as Seaside Sparrows. By combining notes, researchers at LSU are looking at the effects of oil spill on multiple levels of marsh ecosystems.

“This is a system that is very important to Louisiana,” Stouffer said. “What we find in these birds may show that the contamination from the oil spill has made it out of the water and into the food web at large.”

“GoMRI In the news” is a reposting of articles about GoMRI-funded research (published by various news outlets). The author’s interpretations and opinions expressed in these articles is not necessarily that of GoMRI.