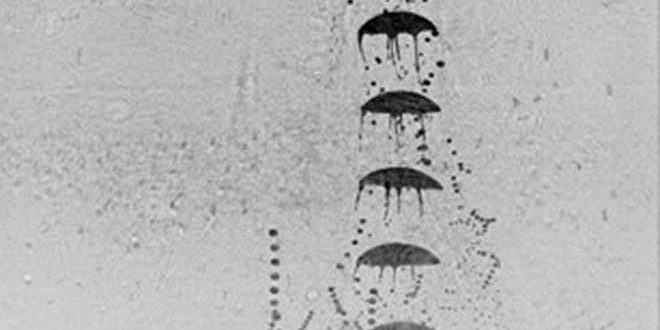 (Click to enlarge) Hologram of “octopus” oil droplets created when dispersant is added to oil. (Provided by: David Murphy and Cheng Li, JHU)

Scientists have simulated a variety of deep-sea oil spill conditions in miniature via a pair of mesocosms, an approach that bridges traditional laboratory and in situ observations.

A large team of researchers from the Dispersion Research on Oil: Physics and Plankton Studies (DROPPS) consortium have built two tanks—each representing a different timeframe in the spill—to bring relevant components of the Gulf of Mexico into the lab. They intend to observe how oil rises and disperses upon entering the environment and how it interacts with small planktonic organisms once there.

DROPPS director Ed Buskey, a professor and marine scientist at University of Texas Marine Science Institute (UTMSI), described the “major undertaking” of designing and building the mesocosms. The scientists created two four-meter-tall tanks, each configured with different oil injection systems to simulate different phases of a deep water spill. They designed both tanks at Johns Hopkins University (JHU) with parts built to specifications in Baltimore. The first tank was sent to UTMSI and took several months to be correctly manufactured and assembled, becoming operational this past spring. Researchers completed the tank at JHU this summer.

JHU’s Joe Katz, a mechanical engineer specializing in fluid dynamics, explained, “Although the tanks have the same external configuration, they have different purposes. The UTMSI tank will be used for biophysical studies, focusing on interaction of oil plumes with planktonic layers. The JHU tank will be used for physical studies, such as dense oil/bubble plumes and aerosols generated by rain fall.”

The tank at JHU has a single nozzle at the bottom to inject a high-speed jet of oil so that researchers can study how it breaks up into droplets. This simulates the initial release in an oil well blowout. The JHU tank also contains a rain tower to observe how splashing raindrops produce oily marine aerosol.

The UTMSI tank simulates the later stage of a spill, when oil encounters native marine plankton in the water column. The bottom of the tank contains heavier, more saline water, with slightly less dense, less saline water in the top half. The scientists insert planktonic diatoms through a port in the side of the tank, and the interface between the two densities suspends them initially in the top layer. They then introduce crude oil, with and without dispersant, slowly through a wide, flat shower head at the bottom, creating a cloud of oil that researchers can observe rising through the planktonic layer.

Optics and lasers surround both tanks to highlight the oil’s movement and interaction with living organisms. High-speed video cameras record what the specialized lights reveal. Scientists use holography, particle image velocimetry (PIV), and other methods to characterize the flows and interactions between the oil, water, and plankton they capture on film.

Buskey explains that with the cameras, “We can observe oil droplets rising through this layer of plankton and see how they interact. This helps us answer questions such as, what fraction of the diatoms will be carried up the water column with the rising oil droplets? Will oil droplets collect diatoms and eventually sink?”

Early experiments at UTMSI show the rising cloud of oil droplets creating vertical flow fields, leading the oil and denser water to rise and mix with the plankton in the upper layer. Any microbes that have fallen to the lower section of the tank move back upwards when researchers introduce the oil. Adding dispersant reduces surface tension, causing oil droplets to trail long, octopus-like arms that eventually break off into smaller droplets. The denser water that rises up from the bottom with the oil carries these very small dispersed droplets with it when it falls back down.

These mesocosm experiments allow an interdisciplinary team with expertise in plankton ecology, chemistry, and fluid dynamics to come together to ask questions about how oil moves and interacts in the environment. The team’s findings will help scientists help responders work more quickly and accurately to protect people and the environment in a future spill.

(Click to enlarge) Diagrams demonstrate how the tanks are configured to run different experiments in each facility. (Drawings by: David Murphy, JHU)

The following researchers are working on this project:

To learn more about this experiment, visit the DROPPS website.

This research was made possible in part by a grant from BP/The Gulf of Mexico Research Initiative (GoMRI) to the Dispersion Research on Oil: Physics and Plankton Studies (DROPPS) Consortium. The GoMRI is a 10-year independent research program established to study the effect, and the potential associated impact, of hydrocarbon releases on the environment and public health, as well as to develop improved spill mitigation, oil detection, characterization and remediation technologies. An independent and academic 20-member Research Board makes the funding and research direction decisions to ensure the intellectual quality, effectiveness and academic independence of the GoMRI research. All research data, findings and publications will be made publicly available. The program was established through a $500 million financial commitment from BP. For more information, visit https://gulfresearchinitiative.org/