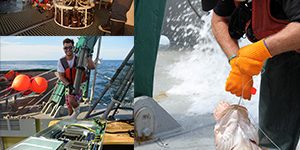 In this digital multimedia age, scientists with the Center for Integrated Modeling and Analysis of Gulf Ecosystems (C-IMAGE) are taking their work to the public via a series of podcasts, bringing their research to life in a way that traditional print media never could.

Produced by David Levin and Ari Daniel of Mind Open Media and available to anyone with an internet connection, the broadcasts cover various aspects of C-IMAGE’s oil spill research. The podcast series, called The Loop, takes listeners under the sea, down into the mud and back to the lab with the researchers as they follow the oil through the Gulf of Mexico ecosystem. Both Florida Public Radio’s Florida Matters and Public Radio International’s Living on Earth have featured these broadcasts, bringing this science to an even wider audience.

The first podcast in the series introduces C-IMAGE and its research. Beginning with a vivid description of the explosion of the Deepwater Horizon, this story covers the many factors that scientists must consider when assessing the impact of oil as it moves through the environment.

The second story lets listeners accompany David Hollander, Steve Murawski, and other scientists with C-IMAGE as they board a research vessel for eight days of field work. The team looks for contaminants in sediment samples and in various fish species to assess the food web and get a “big picture” view of the ecosystem after the spill. The scientists explain that finding problems is the easy part – figuring out what caused the problems is complicated.

A Look at the Little Guys

In the third podcast, listeners go to the base of the marine food web. Dr. Kendra Daily explains that although they may be microscopic, phytoplankton and zooplankton have a big impact on larger species that we eat. She discusses the phenomenon of “marine snow” – a mixture of dead plankton and oil droplets – that can impact other important microscopic organisms on the seafloor. Damage to these tiny creatures has a “cascade effect” on the health of the food web, with both ecological and economic consequences.

The fourth story follows Cameron Ainsworth and Jason Lenes as they use a computer model of the Gulf of Mexico. Their model is only as good as the data used to populate it, and gathering enough pertinent information is a daunting task. When published data is not readily available, the team must perform original research to gather the data. The ultimate goal is to create a computerized simulation of the Gulf that includes all life – from the tiniest plankton to the biggest whale – to better understand the ecosystem and how future disasters might impact the Gulf.

The Loop will continue with episodes featuring more facets of oil spill research and the researchers working to unravel the mysteries of the mud, microbes and mammals in the Gulf.

The Gulf of Mexico Research Initiative (GoMRI) funds the Center for Integrated Modeling and Analysis of Gulf Ecosystems (C-IMAGE) consortium research program. GoMRI is a 10-year, $500 million independent research program established by an agreement between BP and the Gulf of Mexico Alliance to study the effects of the Deepwater Horizon incident and the potential associated impact of this and similar incidents on the environment and public health.