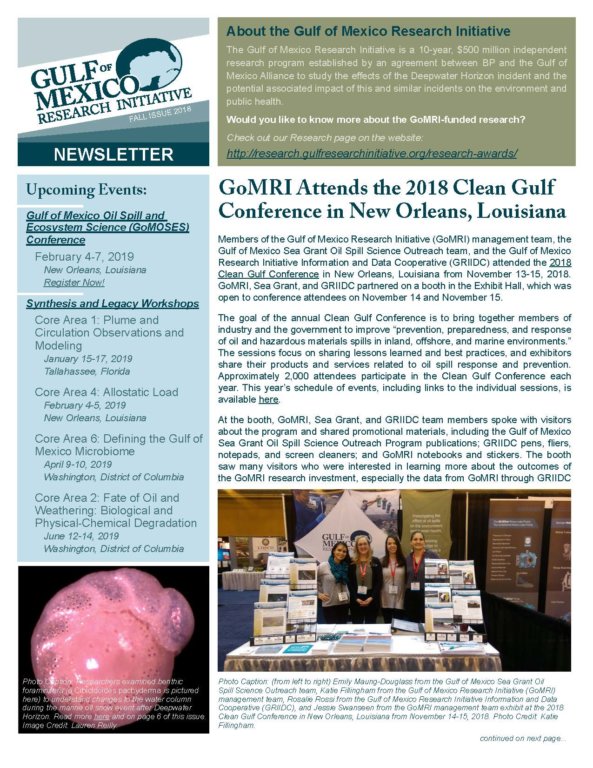 The Ecosystem Impacts of Oil and Gas Inputs into the Gulf (ECOGIG) consortium has released a new video series in partnership with filmmaker and Sherman’s Lagoon creator Jim Toomey called The Adventures of Zack and Molly (the #DeepSeaDuo). The three-part series follows Zack and his new roommate Molly, a Dumbo Octopus, as they explore the deep ocean in the Gulf of Mexico. Throughout the series, Molly teaches Zack about her home, including the unique ecosystems that exist there and how they are being impacted by human activities. The videos are available through the ECOGIG website here, which also includes a learning guide for educators, the series’ trailer, and recent and upcoming film festival screening dates. The series has already won Best Animation (Jim Toomey) at the Wildlife Conservation Film Festival and Award of Excellence: Nature/Environment/ Wildlife (Jim Toomey) at the Best Shorts Competition. Be sure to check it out!

Dr. Christopher Reddy from the Woods Hole Oceanographic Institution has been selected as a recipient of the 2018 Ambassador Award by the American Geophysical Union (AGU). Dr. Reddy was a co-principal investigator with the Deepsea to Coast Connectivity in the Eastern Gulf of Mexico (Deep-C) consortium, is a co-principal investigator with the Center for the Integrated Modeling and Analysis of Gulf Ecosystems (C-IMAGE), and is a co-principal investigator on the RFP-V project “The State-of-the-Art Unraveling of the Biotic and Abiotic Chemical Evolution of Macondo Oil: 2010-2018.” The Ambassador Award is given annually to scientists who have made outstanding contributions in the areas of societal impact, service to the Earth and space community, scientific leadership, and promotion of talent and career pool. Dr. Reddy received his award during the Honors Tribute at the 2018 AGU Fall Meeting in Washington, District of Columbia. GoMRI congratulates Dr. Reddy on receiving this award!

GoMRI recognizes the graduate students whose vital research contributes to improving understanding about the damage, response, and recovery from the Deepwater Horizon oil spill. Candidates for the GoMRI Scholars program must be graduate students who have participated in a GoMRI-funded project for at least one year, whose research is primarily funded by GoMRI, and who are working on a dissertation or thesis based on GoMRI-funded science.

Smithsonian Ocean Portal recently released a new article in partnership with the Alabama Center for Ecological Resilience (ACER) called How to Survive an Oil Spill: Oyster Edition. Approximately 8.3 million oysters died after the Deepwater Horizon oil spill. Both dispersant and the input of fresh water into the coastal areas, that was meant to keep the oil away from shore, contributed to the loss. The Ocean Portal article highlights research by ACER scientist Dr. Sean Powers, who is conducting experiments in the field and in his lab that are focused on understanding how salt, genetic diversity, and dispersant impact oyster health and their resiliency in the event of future oil spills. Check it out here.

As a part of their yearlong collaborative project with the National Academies of Sciences, Engineering, and Medicine Gulf Research Program (GRP) and the Gulf of Mexico Research Initiative, the Gulf of Mexico Sea Grant Oil Spill Science Outreach team hosted the first in a series of workshops to discuss “regional priority setting for health, social, and economic disruption from spills” from December 4-5, 2018 at the Houma-Terrebonne Civic Center in Houma, Louisiana. The goals of this kick-off workshop were to provide recommendations for public health protocols to be included in existing response and regulatory frameworks, identify pilot project ideas and research and outreach priorities, and identify resources available to address local and regional public health and disaster issues. A summary of the workshop is available here, and an overview of the workshop series, including a link to a pre-workshop report, is available here. For additional information on all of the Gulf of Mexico Sea Grant Oil Spill Science Outreach Program seminars and workshops, please visit their website here.

The Gulf of Mexico Research Initiative (GoMRI) and the Marine Technology Society (MTS) have partnered to produce a special issue of the Marine Technology Society Journal. The special issue was developed through an initial collaboration between the GoMRI and MTS communities at a TechSurge event in February 2018, called Advancing Oil Spill Technology: Beyond the Horizon. The goal of the TechSurge was to bring the two communities together to share research results and discuss how they could work together to be better prepared for future oil spill events; areas of focus included modeling and prediction, mitigation, technologies for detection, and ecosystem health. The TechSurge was featured in the winter 2018 issue of the GoMRI Quarterly Newsletter. Following the event, the MTS Journal announced a call for papers inviting the oil spill science community to submit abstracts to contribute to the special issue, which is also called Advancing Oil Spill Technology: Beyond the Horizon. Dana Yoerger, GoMRI Research Board member; Steve Murawski, Director of the Center for the Integrated Modeling and Analysis of the Gulf Ecosystem (C-IMAGE); Sherryl Gilbert, C-IMAGE Program Coordinator; and Liesl Hotaling, Vice President of Education at the Marine Technology Society, served as guest editors. The special issue is available to Marine Technology Society members here.

“The Deepwater Horizon accident, tragic as it was, became a motivating force for technological innovation first to understand the facts and consequences of that accident, later to consider more widely the challenges of working at the frontiers of the marine oil and gas industries. The apparatus, techniques, and analyses described in this special issue of the Marine Technology Society Journal are but a taste of the many new innovations that will hopefully help prevent future deep oil and gas accidents and provide responders with more timely situational awareness of future accidents.”

Steve Murawski, Guest Editor and Director of the Center for the Integrated Modeling and Analysis of the Gulf Ecosystem (C-IMAGE)