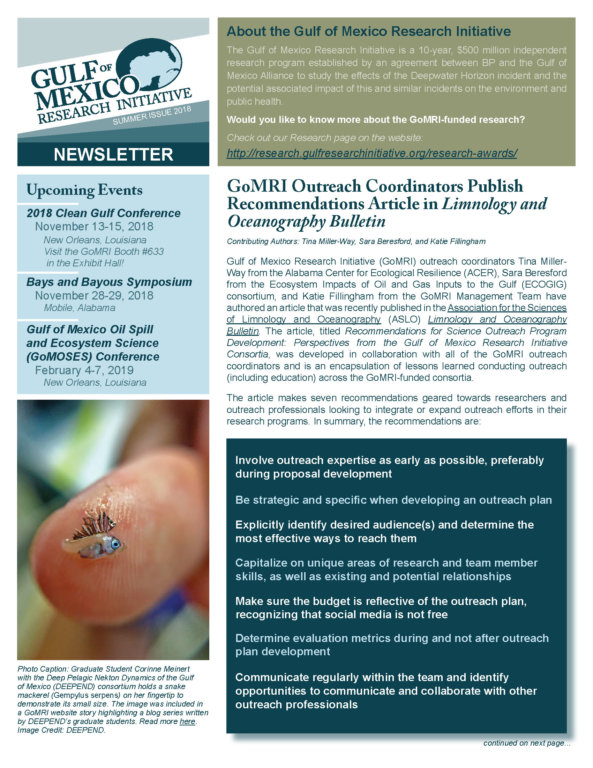 Researchers with the RFP-V project Understanding Resilience Attributes for Children, Youth, and Communities in the Wake of the Deepwater Horizon Oil Spill (RCYC) recently produced video shorts describing the project’s goals and methodologies. The RCYC project is led by Dr. Tim Slack (Louisiana State University) and Dr. Jaishree Beedasy (Columbia University) in partnership with researchers at Louisiana State University’s Department of Sociology and the National Center for Disaster Preparedness at Columbia University’s Earth Institute. It is focused on assessing the impact of the Deepwater Horizon oil spill on children and their families, and the factors which play a role in their ability to recover both as individuals and communities. In the videos, doctoral student Kathryn Keating answers questions about RCYC, including what the project is, how the researchers gather their information, how they are using social media in their study, and how projects like RCYC can improve community preparedness in the future. Be sure to check out the video series’ Twitter Moment here, the video compilation on Vimeo here, and join the conversation using the Twitter hashtag #rcycqa.

The Relationships of Effects of Cardiac Outcomes in Fish for Validation of Ecological Risk (RECOVER) consortium released the third video in their Mini Mahi Tags series, called Behavior and Tags. This final installment in the series follows up from Part 2 in which the RECOVER researchers assessed the metabolic impacts of carrying a satellite tag on the mahi-mahi. Part 3 focuses on understanding any subtle behavioral changes in the fish when carrying a satellite tag, particularly any changes they exhibit when associating with fish that are untagged. These include parameters like acceleration, turning radius, swim speed, and average proximity to other fish. Check out Part 3 here.

Researchers from the Deep Pelagic Nekton Dynamics in the Gulf of Mexico (DEEPEND) consortium participated in the History Channel’s new series In Search Of, hosted by Zachary Quinto and inspired by the original series of the same name hosted by Rod Serling and Leonard Nimoy from 1977-1982. The team was featured in episode three, titled Monsters of the Deep. All episodes of In Search Of can be found on the History Channel’s website here, and more information on DEEPEND’s participation is available on their Twitter page.

The Gulf of Mexico Research Initiative (GoMRI) Research Board Chair Dr. Rita Colwell was recently selected as the recipient of the Lee Kuan Yew Water Prize 2018, a prestigious award given to individuals or organizations who have made significant contributions to solving the world’s water challenges through the development of new technologies, policies, or programs. Through her research in water microbiology, Dr. Colwell discovered the viable but non-culturable (VBNC) phenomenon in bacteria, and she also discovered that sari cloth can effectively filter drinking water. Both of these findings have aided significantly in addressing waterborne diseases, such as cholera. Dr. Colwell received the award at the Singapore International Water Week, held in July 2018, in conjunction with World Water Day and the launch of the International Decade for Action: Water for Sustainable Development 2018-2028. GoMRI congratulates Dr. Colwell on this recognition of her incredibly important work and for receiving this award.

GoMRI congratulates Dr. Martin Grosell, principal investigator and director of the Relationships of Effects of Cardiac Outcomes in Fish for Validation of Ecological Risk (RECOVER) consortium, on receiving the Award of Excellence in fish physiology from the American Fisheries Society. Dr. Grosell received his award during the 13th International Congress on the Biology of Fish. Congratulations Dr. Grosell!

Researchers funded through the RFP-V project Genomic Responses to the Deepwater Horizon Event and Development of High-Throughput Biological Assays for Oil Spills, hosted a series of workshops in 2017 and 2018 focused on developing genetic markers to characterize the taxonomic composition of benthic communities. Benthic communities can be significantly affected by events such as oil spills, but lack of genetic sequencing and taxonomy for these communities makes it difficult to assess their impact. The workshops, called Benthic Invertebrate Taxonomy, Metagenomics, and Bioinformatics (BITMaB), were convened to bring together nearly 100 researchers with the goal of addressing this critical gap. They were organized by principal investigator Kelley Thomas from the University of New Hampshire, Holly Bik from the University of California-Riverside, Paul Montagna from Texas A&M University-Corpus Christi, Francesca Leasi from the Smithsonian Institution, Krystalynne Morris from the University of New Hampshire, Jon Norenburg from the Smithsonian Institution, and Michael Reuscher from the University of Texas A&M University-Corpus Christi. Participants identified more than 360 benthic organisms from nearly 100 taxa, and the results were published in two reports.

GoMRI recognizes the graduate students whose vital research contributes to improving understanding about the damage, response, and recovery from the Deepwater Horizon oil spill. Candidates for this program must be graduate students who have participated in a GoMRI-funded project for at least one year, whose research is primarily funded by GoMRI, and who are working on a dissertation or thesis based on GoMRI-funded science.

The Gulf of Mexico Sea Grant Oil Spill Science Outreach Team recently released three new publications. The one page fact sheet Storm and Spills shares how storms can cause oil spills. The one-pager details who to contact if a storm-induced spill occurs in your area and includes some examples of oil spills caused by hurricanes. The team also recently announced their year-long collaborative project with the Gulf of Mexico Research Initiative and the Gulf Research Program of the National Academies of Sciences, Engineering, and Medicine. The one page fact sheet Collaborative Project: Regional Priority-Setting for Health, Social, and Economic Disruption from Spills shares more about this partnership, including the goals of the program, possible workshop locations, and anticipated outcomes. Underwater Vehicles Used to Study Oil Spills describes the remotely operated vehicles, autonomous underwater vehicles, and human occupied vehicles scientists use to study oil spills beneath the sea surface. All of the Gulf of Mexico Sea Grant Oil Spill Science Outreach Program publications are available here.

In addition to the publications, the team also released a set of modules on oil spill science, originally created for the Society of Environmental Toxicology and Chemistry North America/World Congress (SETAC) meeting in 2016. The series includes an Introduction to the Sea Grant Oil Spill Science Outreach Program, an Introduction to Crude Oil and Petroleum Substances, an Overview of Oil Fate Transfer and Transformation Processes, and Oil Spill Management and Response Options and is available here.

Finally, the team hosted a seminar on Technology Used to Study Oil Spills, Part 2 at the University of Southern Mississippi’s Gulf Coast Research Laboratory in Ocean Springs, Mississippi on August 29, 2018. This seminar was a follow up to their Technology and Deepwater Horizon seminar, hosted in August 2016 at the University of Miami. The seminar featured several guest speakers who highlighted many of the technologies used to study spills, including drifters, aerostats, and unmanned surface vehicles. More information on the agenda and speakers is available here. Information on all of the Gulf of Mexico Sea Grant Oil Spill Science Outreach Program seminars and workshops can be found here.

Smithsonian Ocean Portal recently released a new article in partnership with the Relationships of Effects of Cardiac Outcomes in Fish for Validation of Ecological Risk (RECOVER) consortium called Fish Heart Out of Water. The article shares how RECOVER scientists are learning that exposure to even small amounts of oil negatively impacts mahi-mahi, a strong, fast fish that can swim up to 40 miles per hour and migrate over thousands of miles. RECOVER graduate student Derek Nelson was able to perform open heart surgery on the fish and expose their hearts to varying levels of oil. Even small concentrations of oil were found to reduce the mahi-mahi’s ability to efficiently pump oxygen, making it more difficult for them to swim and capture food. From these findings, RECOVER post-doctoral researcher Rachael Heuer began investigating mahi-mahi hearts at the cellular level by removing the hearts from the fish completely and exposing them to oil. Similarly, she discovered that even small amounts of oil reduced the hearts’ ability to contract. RECOVER is now using these discoveries to investigate the impacts of oil exposure on other fish in the Gulf, like the cobia and the red drum. Read the article here.