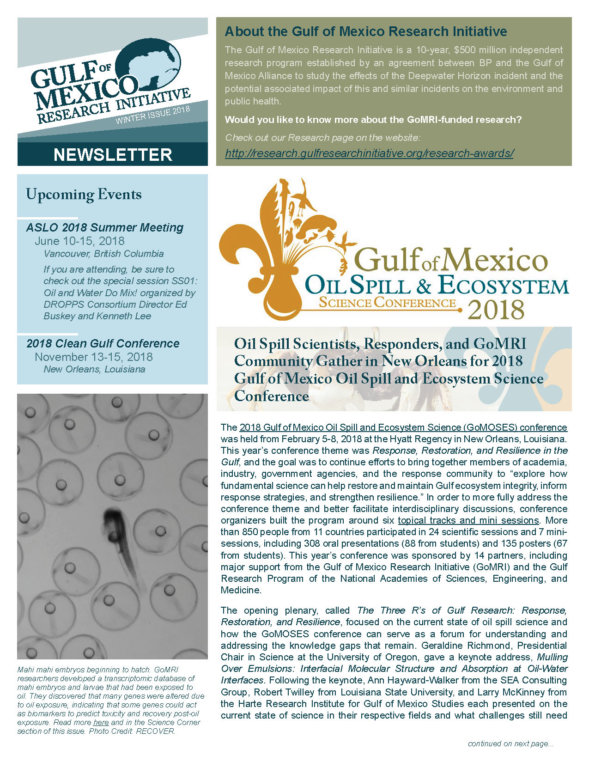 GoMRI-funded consortia Deep Pelagic Nekton Dynamics of the Gulf of Mexico (DEEPEND) and Ecosystem Impacts of Oil and Gas Inputs to the Gulf (ECOGIG) participated in the BBC-produced documentary series Planet Earth: Blue Planet II. The series, which is narrated by David Attenborough, includes seven episodes focused on  exploring  the world’s ocean. DEEPEND researchers are featured in Episode Two called The Deep, which explores the unique ecosystems in the deep ocean. While filming for the series, ECOGIG’s Director Dr. Mandy Joye dove in a submersible with Dr. Sylvia Earle to explore brine pools at the bottom of the ocean. See a clip here! Be sure to check out Blue Planet II’s website for more information on both the documentary series and their digital project, Our Blue Planet, which is working to get people talking about the importance of the ocean.

Coastal  Waters  Consortium  (CWC)  doctoral candidate and GoMRI Scholar Yu Mo received the grand prize in the American Geophysical Union’s (AGU) 2017 Data Visualization and  Storytelling  Competition.  The  goal  of the contest, which is open to undergraduate and graduate students at U.S.-based institutions, is to inspire “innovation and creativity [for] presenting data in new ways.” Applicants are judged on how clearly they present their data, the perceived level of engagement by their audience, and how well their presentation is organized. Six grand prize winners were selected in the 2017 competition, include Yu. Their prizes included a travel grant and registration to attend the 2017 AGU Fall Meeting, a travel grant to attend another Earth and space science meeting in 2018, and the opportunity to share their data story at the NASA HyperWall (either at AGU or at another meeting). Congratulations, Yu!

GoMRI Research Board member Dr. Peter Brewer recently received the Award for International Scientific Cooperation of the Chinese Academy of Sciences (IOCAS), given to honor “eminent foreign experts who have made outstanding contributions to facilitating cooperation with CAS in science and technology,” in an effort to “strengthen CAS’s science and technology innovation capacity and lead to improvement in its research performance, education and training, management, and reputation in the international scientific community.” Dr. Brewer accepted the award in Beijing in January. For more information on Dr. Brewer’s recognition, including an inspiring story on how he became involved with CAS and a video recognizing his many accomplishments, please visit the GoMRI website here. The GoMRI community congratulates Dr. Brewer on this distinguished honor!

GoMRI recognizes the graduate students whose vital research contributes to improving understanding about the damage, response, and recovery of the Deepwater Horizon oil spill. Candidates for this program must be graduate students who have participated in a GoMRI-funded project for at least one year, whose research is primarily funded by GoMRI, and who are working on a dissertation or thesis based on GoMRI-funded science.

The Sea Grant Oil Spill Science Outreach Team hosted the final seminar in their series Responding to Oil Spills on January 9, 2018, in Lacombe, Louisiana on Offshore and Deep Sea Habitats. The seminar, hosted by the U.S. Fish and Wildlife Service at the Southeast Louisiana National Wildlife Refuges Complex, brought together scientists, responders, and natural resource managers to discuss oil spill preparedness in offshore environments. The team also hosted a workshop at the 2018 Gulf of Mexico Oil Spill and Ecosystem Science conference on February 5, 2018 in New Orleans, Louisiana called Sharing Science Effectively: Know Your Audience and Speak Their Language. The goals of the workshop were to discuss common challenges scientists face when presenting their research and to provide tips on how to reach different audiences and refine presentation slides. The workshop was instructed    by Dennis Meredith, a science journalist and communicator who has worked at research universities and with media outlets. The next seminar will take place on March 29, 2018 in Galveston, Texas, called Oil Spill Response, Assessment, and Restoration: Marine Mammals. The seminar will feature marine mammal research and discussions on how to best integrate research with response, restoration, and recovery of their populations in the event of future oil spill events. More information on these seminars, including summaries and recordings of past seminars, are available on the Gulf Sea Grant website here.

The Sea Grant Oil Spill Science Outreach Team  has also released a new publication and one-page fact sheet.   The publication Corals and Oil Spills discusses deep sea coral communities in the Gulf, how they were impacted  by the Deepwater Horizon Oil Spill, and how the communities are recovering. The one-page fact sheet Creating Healthy Communities to Overcome Oil Spill Disasters shares how communities are impacted by disasters and what resources are available to help promote resiliency and restoration following traumatic events. More information on these publications is available on the Gulf Sea Grant website here.

Smithsonian Ocean Portal has recently released two new articles featuring GoMRI- funded science. Seeing with Sound: Acoustic Monitoring of Beaked Whales Can Help Determine Oil Spill Impacts shares how scientists are using sound to better understand marine mammal populations in the Gulf of Mexico, particularly species that live deep in the Gulf and are hard to track visually. By using sonar to listen in on the whales communicating via echolocation, scientists can gain insight into how many animals there are, when and how they feed, and ultimately how they have been impacted and are recovering from the Deepwater Horizon oil spill. The article features scientists from the Center for the Integrated Modeling and Analysis of the Gulf Ecosystem (C-IMAGE), funded by GoMRI, the Scripps Whale Acoustics Lab, and the Centre for Research into Ecological and Environmental Modelling at St. Andrews University. Read more here.

The Gulf of Mexico: A Deep-Sea Treasure Trove of Fishes shares how scientists are learning that the mesopelagic region of the Gulf of Mexico, the area between 650 and 3,300 feet below the sea surface, is one of the most diverse mesopelagic regions in the world with more than 800 species. Researchers believe that diversity is the result of the Gulf’s unique location, variable temperatures, and interaction with the Mississippi River. Scientists have discovered nearly 200 new species in the Gulf since the Deepwater Horizon oil spill, and they are certain there are many more places across the globe with as much or more diversity waiting to be explored. The article features images and research from the GoMRI-funded Deep Pelagic Nekton Dynamics of the Gulf of Mexico (DEEPEND) consortium. Check it out here.