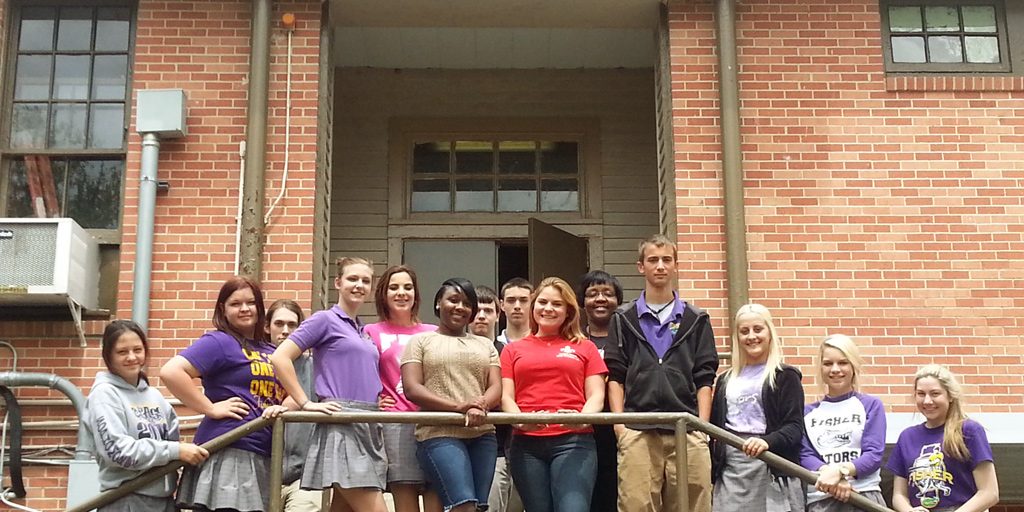 Science outreach efforts often take time, even seasons, to bear fruit. But with patience and planning, a multi-year mentoring effort with scientists from Tulane University and Louisiana State University (LSU) has sparked a cycle of learning and development.

A web of connections is now established bringing together oil spill researchers, undergraduate interns, a high school teacher, and K-12 students in Louisiana. Together, they are building a larger learning community excited about science.

Scientists along with Bennetta Horne, program coordinator for the Consortium for the Molecular Engineering of Dispersant Systems (C-MEDS), have engineered a multi-pronged approach to engage students of all ages in CMEDS’ research. Since 2012, Tulane and LSU researchers have mentored twenty undergraduate science interns, ten each academic year. These interns conducted laboratory research related to oil spill remediation, particularly focused on dispersants. The interns’ summer projects culminated in formal scientific presentations, but their involvement did not end there.

The C-MEDS intern program also included Keva Jones, a science teacher at Fisher Middle-High School in Lafitte, Louisiana. For over two years, Jones has worked with Tulane scientists and the undergraduate interns to bring cutting-edge science to her teaching and to other students. The undergraduates worked with Jones each summer and conducted a Science Demonstration Day for K-7 students from St. James Methodist Church Summer Camp in New Orleans. Later in the school year, some interns went to Jones’ classroom and talked to her students about their research and conducted lab experiments with them, demonstrating science concepts.

In both the high school classroom and the K-7 summer camp, the interns presented high-level science using fun, hands-on activities. They conducted experiments that showed the response of oil and water when mixed together and the methods to remove oil from water. They also led experiments to demonstrate reactions between materials of different chemical properties.

For example, intern Mary Osetinsky said the “kids exploded with excitement” when they saw what happens when Mentos candy was dropped into Diet Coke. The foam eruption is a result of the reaction between the potassium benzoate, aspartame, and carbon dioxide gas contained in Diet Coke and the gelatin and gum arabic contained in Mentos. The Mentos’ structure is key to the experiment because its surface is covered with many small holes. These holes allow the carbon dioxide bubbles to create many nucleation sites, increasing the surface area of the reaction and the quantity of reagent exposure (the substance that causes a chemical reaction). The results are rapid reactions and the geyser-like eruption. Osetinsky laughingly said that they made “college look ‘cool’ instead of boring!”

Jones found the interns’ love of science “refreshing” and was thrilled at how the simple experiments “wowed” both the camp and her high school students. But the best moment, she explained, was when her students became even more interested when the interns spoke about their small-scale lab research helping the environment on a larger scale.

The key to success for everyone involved in the C-MEDS outreach program are the connections they make – personal, professional, and educational.

For Karry Wright, this internship helped her see her chosen field from a new angle, “Having an organic chemistry background, I was able to expand my knowledge and compare the various techniques and approaches of the other interns from a physical chemists’ point of view.”

Osetinsky echoed this idea when discussing her course of study which involves using surfactants to fight cancer, saying, “I loved that you can take one part of science and apply it to something that may seem completely different,” and that these fields “are more connected than most people think.”

For Jones, a link came with surfactants as well when a student questioned the wisdom of using chemicals to disperse oil. Jones was elated to see the “real life connection” that her students made with the experiments explaining that “it made my students think about the environment and the work that was being done” and that seeing her students make that connection “was a great moment in the class.”

Jones stated that the professional connections she is making through this program are invaluable. Not only is she working directly with scientists and learning what goes on in a cutting-edge research facility, she is learning about the skills her students need to be successful in college and about careers she can encourage them to pursue.

“Doctors don’t just work in hospitals,” said Wright, summing up a secondary goal of the program to educate students about many different science degrees and careers. She felt that is was important to have “more degree seeking students and scientists in the future generations,” and that students need to know they are not limited to well-known career possibilities.

For Osetinsky, the goal was personal: “As a female engineer, I have a soft spot for young girls interested in science and engineering.” Her desire was to have an impact “even if it’s just putting college in their heads at a young age.”

Introducing the young scientists to her classroom gave Jones “a sense of urgency” to plan lessons that spark a love of science that lasts. She explained that “research changes the way we live our lives,” adding, “we need students to pursue science careers.”

For her own science-teaching career, Jones said that working in a college lab helped her “better understand the gaps that exist between high school and college level science.” She also noted that being involved in this type of extended program “enhances my ability to give my students real life connections when I teach.”

Most importantly, Jones said, she is finding out the extent to which the oil spill affected the environment and the people of the Gulf Coast—a lesson that should not be forgotten.

Read about the 2012 Interns and their activities: C-MEDS Interns Focus on Dispersant Research and Community Outreach. Visit the C-MEDS website to learn more about their work.

This research was made possible in part by a grant from BP/The Gulf of Mexico Research Initiative (GoMRI) to the Consortium for the Molecular Engineering of Dispersant Systems (C-MEDS). The GoMRI is a 10-year independent research program established to study the effect, and the potential associated impact, of hydrocarbon releases on the environment and public health, as well as to develop improved spill mitigation, oil detection, characterization and remediation technologies.  An independent and academic 20-member Research Board makes the funding and research direction decisions to ensure the intellectual quality, effectiveness and academic independence of the GoMRI research.  All research data, findings and publications will be made publicly available.  The program was established through a $500 million financial commitment from BP.  For more information, visit https://gulfresearchinitiative.org/.