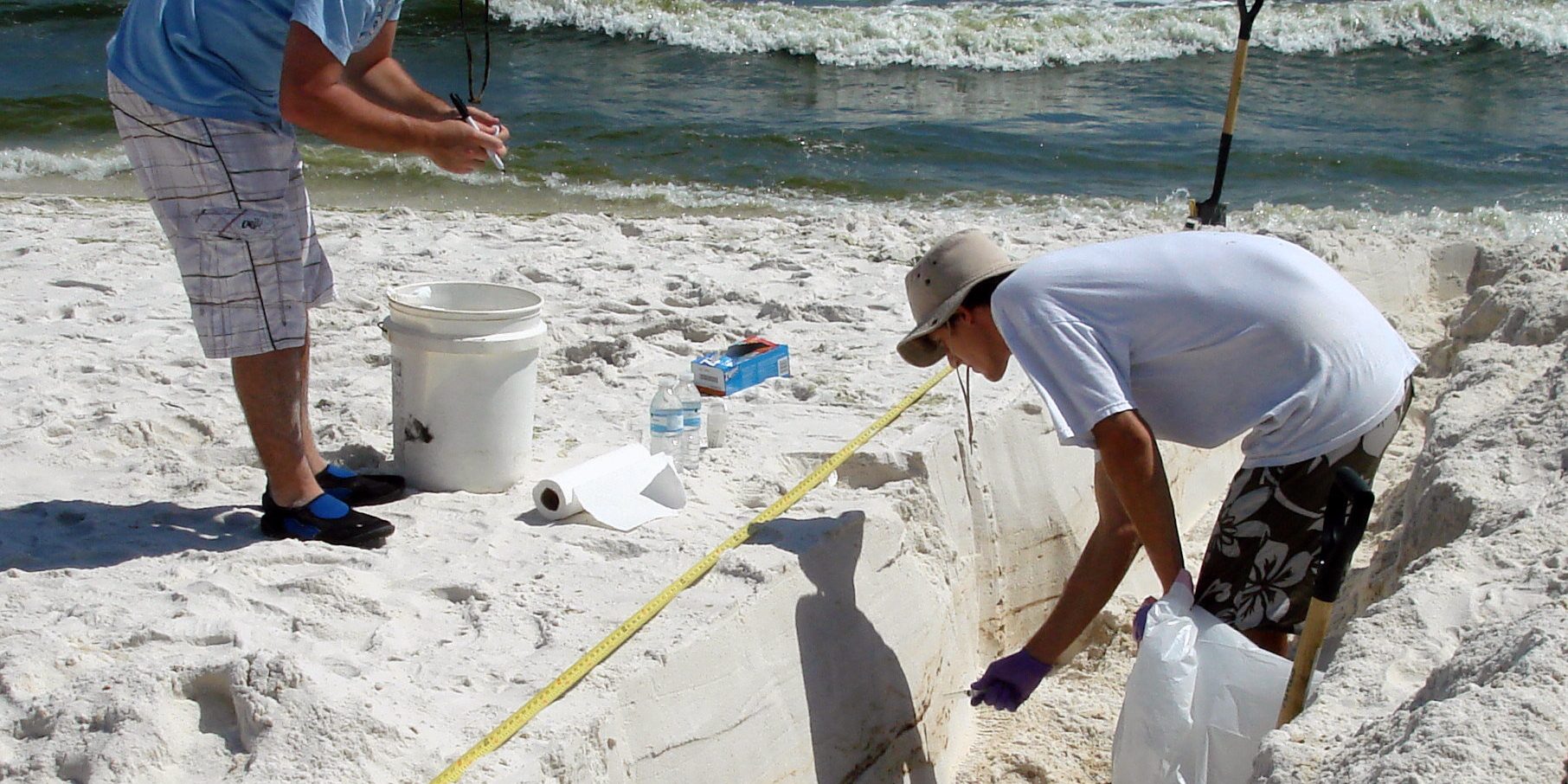 (Click to enlarge) Technician Jonathan Delgardio (GT) and undergrad student Will A. Overholt (GT) collecting samples from a sampling trench on Pensacola Beach. Oil layers can be seen in the cross section of the sediment.

With buckets and shovels in hand, scientists have collected and are analyzing oil found in the sediments of Gulf coast beaches. With support from a Gulf of Mexico Research Initiative (GoMRI) grant, Dr. Markus Huettel of Florida State University (FSU) and Dr. Joel Kostka of the Georgia Institute of Technology (GT) are working to understand the impacts of buried sheets of oil and tar from the Deepwater Horizon oil spill.

In late June 2010, a little over two months after oil began pumping from the ruins of the Deepwater Horizon, Hurricane Alex pushed oil toward the shoreline in the northeastern Gulf of Mexico. While monitoring sites along the Alabama and Florida coasts, Huettel and Kostka noticed a problem that needed immediate attention—the wind and waves from Hurricane Alex had buried the existing sheets of oil and tar on Florida’s beaches with sediment.

Huettel, who specializes in the study of sediments in a coastal zone, explains the significance of the oil beneath the sand surface,

“One to two feet of sediment was on top of the existing oil deposited by the spill—in some places even more. Oil not exposed to light, high temperatures, and oxygen doesn’t degrade as fast. Most of the oil that reaches the shoreline is broken down or biodegraded by oil-eating bacteria” — Dr. Markus Huettel

“In the presence of oxygen, oil buried in warm Gulf sands will be degraded in weeks to months, whereas oil is likely to persist in the sands for years without oxygen.”  — Dr. Joel Kostka

Huettel and Kostka’s discovery led to concern that harmful polycyclic aromatic hydrocarbons (PAHs) could get into the groundwater if the oil remained buried deep in the sediment.

To address this problem, BP initiated a deep cleansing process. New machinery was brought in to remove the upper layer of sediment, and then the material was sifted in an attempt to remove buried oil and tar. While this physical cleaning removed many of the larger oil particles such as tar balls from the buried oil layers, smaller oil particles remained on the beach. While Huettel felt that the process of sifting increased the exposure of those remaining particles to the elements speeding degradation, scientists are continuing to monitor for presence of PAHs in the area.

The collection sites that Huttel and Kostka  studied included Pensacola, FL and Bon Secour, AL, and they used Laguna Beach and St. George Island, FL as control sites. They were able to “fingerprint” the oil, i.e., look at various biological and geological components to be sure what they were studying did indeed come from the Deepwater Horizon spill. Microbial communities were also fingerprinted using the latest genetic techniques to uncover “microbial indicators” of the various stages of oil degradation.  Huettel and Kostka have completed their data collection for this first phase of their research and are now processing their samples.

Huettel and Kostka will extend their study in conjunction with the recently-awarded GoMRI Deep-C research consortium led by FSU. Using a methodology similar to that employed on the beach study sites, Huettel and Kostka will look at the sea floor of the Florida Panhandle shelf. The purpose of this phase of their research will be to attempt to locate oil layers that may be buried in the floor of the eastern Gulf of Mexico and could be exposed or dislodged during future tropical weather events.