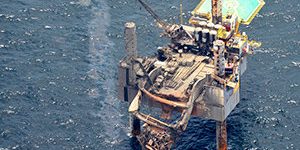 (Click to enlarge) This photo, taken on July 25 36 hours post-explosion, suggests evidence of surface discharge from the Hercules gas rig blow out. Photo provided by Dr. Bonny Schumaker president and founder of Wings of Care, a non-profit organization dedicated to the protection and preservation of wildlife, wild habitat, and natural ecosystems. (Visit: http://www.onwingsofcare.org/)

“This is an opportunity to put science into immediate practice.” – Tamay Ozgokmen, University of Miami and director of CARTHE

It started with radio chatter about a gas rig blowout heard on a research vessel early Tuesday morning.  A few days later an all-star science team from across the Gulf region sailed from Cocodrie, Louisiana on the R/V Acadiana to the Hercules site. The vessel was loaded with ocean drifters to track movement of surface waters around the rig and with equipment to collect time-sensitive samples of water, air, and sediment.  Working with federal authorities, the research team received sampling access to within 500 meters of the rig.

A flurry of emails and phone calls on Tuesday turned into meetings on Wednesday. Researchers quickly generated real-time models to support plans for drifter deployments and sampling sites and obtained use of a vessel. On Thursday and Friday, teams loaded equipment into vehicles or hurriedly prepped them for express shipment and then travelled to Cocodrie and loaded the vessel. The first expedition left port on Saturday 6 AM in bad weather and rough seas and sailed to the incident site. That afternoon and evening, despite challenging conditions, drifters were transmitting GPS signals of their movement and researchers began collecting water and sediment samples.  The crew returned to port around midnight for rest and supplies. On Sunday evening the vessel left port again and science crews continued their work through Tuesday, successfully gathering important data.

About the animation: CARTHE scientists aboard the R/V Acadiana (grey line) released 21 GPS drifters (small black dots) around the Hercules rig (green diamond) to track the movement of potential contaminants that the blowout might have released. The circular cross indicates the center mass of the drifters, while the orange area in the animation shows the potentially impacted areas. Scientists will track these drifters for the next month. Animation credit: Edward Ryan (University of Miami and CARTHE)

(Click to enlarge) CARTHE provided this image on July 26, 2013, 2:19:04 PM CDT. It shows suggested locations where researchers on R/V Acadiana should deploy drifters. Sites are in a circular pattern around the Hercules Rig with radii changing from 1 km to 10 km. (Image credit: Edward Ryan and Tamay Ozgokmen, University of Miami and CARTHE)

This gas-well blowout represents a unique opportunity to document impacts of contaminants in a shallow water environment. The foresight, resourcefulness, and collaborative efforts of these quick-acting researchers should give the public, responders, and other scientists key information about the incident arena, at essentially its beginning, to better understand impacts as this event evolves.

The scientists and researchers are members of five Gulf of Mexico Research Initiative (GoMRI) consortia:

Being part of the GoMRI science community played a key role in the success of this endeavor. “The GOMRI network – knowing the expertise of other GoMRI consortia and the proper people to contact – made it possible to assemble a scientific ‘dream team’ in short order,” said Samantha Joye who spearheaded this effort. Joye, a biogeochemist and microbial ecologist with the University of Georgia and science lead for the ECOGIG consortium, continued, “It was impressive to see how eager and willing our GoMRI colleagues were to contribute and become involved in this effort.”

Steven Murawski, a fisheries biologist and marine ecologist with the University of South Florida and director of C-IMAGE, expressed a similar perspective, “Having GoMRI scientists on ‘speed dial’ created an efficient response network with the expertise to address important issues.” Brian Roberts, an ecologist and biogeochemist with the Louisiana Universities Marine Consortium (LUMCON) and CWC, concurred saying, “The established GoMRI consortia made us all aware of the different expertise that consortia members have, making it easy to find the right people who are primed to contribute to a rapid response collaborative project.”  Piers Chapman, a marine chemist at Texas A&M University (TAMU) and director of GISR, attributed “GoMRI as a catalyst” for this effort.

“The general public doesn’t get excited about natural gas the way they do about oil, because you can’t see it, you can’t smell it, and it doesn’t wash up all over your beaches,” but, “it’s a very potent gas with important ecosystem and climate effects.” – Joseph Montoya, Georgia Institute of Technology and ECOGIG consortium

In the early morning hours on Monday July 23rd, the Hercules 252 rig owned by Walter Oil and Gas of Houston, TX blew out, spewing a mixture of gas, condensate and possibly other hydrocarbons into the water and air. The rig is located about 55 miles south of the Louisiana coast. All workers on the rig were safely evacuated. Surface sheens periodically became visible and then dissipated at and around the blowout site. Later the rig caught fire and continued to burn until, as authorities believe, sand and sediment clogged the well, temporarily shutting off the gas flow. Responders are preparing to dig a relief well for a permanent plug.

Gas leaks do not leave visible markers that oil leaks do, but they release toxic chemicals into the environment. Murawski explained, “Just because it is not blowing gas at the surface on the rig does not necessarily mean that no gas or other liquid hydrocarbons that contaminate water is not leaking into the Gulf.”

(Click to enlarge) University of Miami Ph.D. students Conor Smith and Nathan Laxague are ready to drive to Cocodrie, LA with a van full of CARTHE drifters. They deployed 21 drifters around the blow out site and the drifters are tracking the movement of surface waters, showing where potential contaminates may travel.
(Photo credit: Guillaume Novelli, University of Miami and CARTHE)

“We are in a position to really nail the science, so we simply have to do it.” – Samantha Joye, University of Georgia and ECOGIG consortium

Everything seemed aligned for this team to respond rapidly to the blowout. Joseph Montoya, a biological oceanographer and biogeochemist with the Georgia Institute of Technology and ECOGIG, was on the R/V Endeavor in the Gulf of Mexico when he heard the radio chatter. Montoya notified his colleague Joye about the incident and coordination began.

In Joye’s search for a vessel and help to coordinate a science team and plan, she learned that several colleagues were at a University-National Oceanographic Laboratory System meeting: Vernon Asper, a marine geologist and geophysicist with the University of Southern Mississippi and ECOGIG, and Joe Malbrough, LUMCON’s marine vessel supervisor. They arranged to charter the R/V Acadiana. Also at that meeting was oceanographer Steven DiMarco with TAMU and GISR.  DiMarco contacted Chapman and Terry Wade, a chemical oceanographer at TAMU and GISR. Together they developed a science plan to collect samples for hydrocarbon analysis.

Joye and Roberts were collaborating on a different at-sea field effort but immediately changed their focus to this event. Roberts handled vessel logistics, providing critical information on space, equipment, and layout, and he kept good communications going with the captain. He coordinated receipt of overnight shipments and housing arrangements. Graduate student Tiffany Warner, with LUMCON/Louisiana State University and CWC, assisted on-site as the groups arrived and loaded the vessel.

Joye contacted Tamay Ozgokmen, a mechanical engineer with the University of Miami and director of CARTHE, for drifters to track surface waters. Ozgokmen’s team prepared a deployment plan and sent Ph.D. students Conor Smith and Nathan Laxague, experienced in deploying drifters, to Cocodrie.

A modeling team formed to support understanding of how a shallow water blowout evolves under gas dynamics: Ozgokmen; Murawski; David Hollander, a chemical oceanographer with USF and C-IMAGE; and a GISR team at TAMU: Scott Socolofsky, a coastal and ocean engineer; Xiaoqian Zhang, a physical oceanographer; and Raffaele Montouro, a computational scientist.

Montoya left the R/V Endeavor and joined the team in Cocodrie for the Saturday expedition. With him were Wade and graduate students Sarah Weber (Georgia Tech), Joy Battles (University of Georgia), Warner, Smith, and Laxague. Leigha and Rick Peterson (Coastal Carolina University) and an AP reporter completed the group. The Sunday night through Tuesday expedition included Wade, Matthew Rich (LUMCON and CWC), Warner, Weber, and Battles.

“This is one of those high-risk/high-benefit things. Even if it turns out to be a fire drill, the fact that we have multiple consortia demonstrating coordination and response to a very relevant event is significant.” – Dr. Steven DiMarco, Texas A&M University and GISR consortium

This collaborative drifter and sampling effort will help improve understanding of surface and below surface dynamics. The models will also help C-IMAGE scientists in August for a previously-planned two week field effort of sediment coring and longlining for fish contamination in the location of the Hercules blowout.

As unfortunate as this event was, it provided an opportunity for researchers to test their “rapid response” plans in a real and serious situation and learn more about the ocean and its response to this and similar events. Additionally, it demonstrated the ability of a diverse group of scientists to efficiently assemble and cooperate for a comprehensive study of the incident on very short notice.

Interactions among scientists, the US Coast Guard at the Unified Area Command, and NOAA’s Office of Response and Restoration were mutually beneficial. Researchers gained access within 5 miles of the gas rig, and responders received information coming from field efforts that helped their work. This type of cooperation – a need identified as a lesson learned from the Deepwater Horizon event – provides a model for greater cooperation between academic scientists and government responders.

The group hopes that, as a result of this effort, the public will have a better understanding of the long-term benefits of conducting Gulf of Mexico research, in particular the scientific network and expertise that is currently being developed within the GoMRI science community. The research of this group is applicable to current events, such as this gas well blowout, and to future events that impact the Gulf region.

This research was made possible in part by a Grant from BP/The Gulf of Mexico Research Initiative (GoMRI). The GoMRI is a 10-year, $500 million independent research program established by an agreement between BP and the Gulf of Mexico Alliance to study the effects of the Deepwater Horizon incident and the potential associated impact of this and similar incidents on the environment and public health.