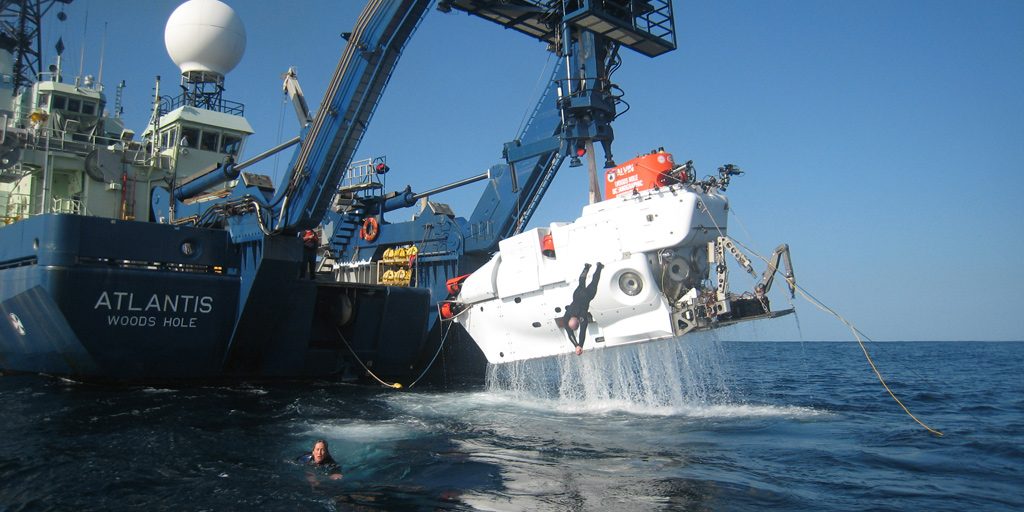 (Click to enlarge) Marine biologist Samantha “Mandy” Joye with the submarine Alvin during a November 2010 research cruise in the Gulf of Mexico. Joye was studying damage to deep-water coral from the Deep Water Horizon oil spill during that cruise. (Photo courtesy of the University of Georgia)

A team of scientists led by the University of Georgia’s Samantha Joye will spend much of April deep underwater, surveying the ocean floor around the Deepwater Horizon blowout that discharged roughly 5 million gallons of oil into the Gulf of Mexico in 2010.

Their primary mission will be to assess the health of the area almost four years after the event. Joye led similar research cruises in the months immediately following the spill and published several peer-reviewed papers as a lead researcher with the Ecosystem Impacts of Oil & Gas Inputs to the Gulf (ECOGIG) consortium, funded by the Gulf of Mexico Research Initiative (GoMRI).

“No one has visited these sites in a human-occupied submersible since 2010, so we are very eager to evaluate the health of these locations firsthand,” said Joye. “Populations of many organisms living in the water and on the ocean floor were seriously damaged by the blowout, so we want to know how things have changed since December 2010.”

The team will use the human-occupied submersible Alvin for the mission. Owned by the US Navy and housed and maintained at Woods Hole Oceanographic Institution (WHOI), the 50 year old submarine became famous in 1966 for locating a lost hydrogen bomb in the Mediterranean Sea. Twenty years later it surveyed the wreckage of the Titanic. Far from an outdated relic, recent renovations at WHOI have Alvin in top condition, fitted with intensive lights, cameras, and robotic arms to aid in research; thrusters that allow it to maneuver over rugged topography miles below the surface; and a basket that can carry up to 400 pounds of sediment from the seafloor to the surface for closer inspection.

(Click to enlarge) Beginning in 2011, Alvin, the nation’s only deep-sea research submersible, underwent an extensive upgrade to expand the sub’s capabilities. From March 13 to 26 2014, scientists will test the new sub for the first time on a Science Verification Cruise in the Gulf of Mexico. In April 2014, scientist Samantha Joye will lead a research team to the Deepwater Horizon site and use Alvin to assess the health of the area. (Photo by Rod Catanach, © Woods Hole Oceanographic Institution)

“The Deepwater Horizon blowout released an unprecedented quantity of oil and gas into the deep ocean,” said Joye. “Alvin will give us a remarkable view of the ocean environment, and we stand to learn a lot about the long-term effects of this disaster.”

Joye, a microbial biogeochemist who specializes in quantifying rates of microbial hydrocarbon metabolism and environmental geochemical signatures in the natural environment, has studied natural oil seeps in the Gulf for 20 years. This trip, she will take the Alvin down to within two nautical miles of the blowout to survey sea floor that was covered in oil in 2010. Her current team, which includes researchers from the Georgia Institute of Technology, Florida State University, University of North Carolina and Coastal Carolina University, will look for ongoing effects of the spill. Joye said that oil could remain in the area “buried beneath a layer of sedimentation, but its effects could still be profound and we will be able to assess this.”

The team will not only be looking for evidence of Deepwater Horizon oil, however. As part of ECOGIG’s long-term microbial observatory research project, they will continue their dives between 75 to 300 nautical miles away from the wellhead, looking for natural seeps in order to examine the role of hydrocarbon-rich brine fluids that emerge from the seafloor in these areas.

(Click to enlarge) Samantha Joye stands on the deck of the research vessel Walton Smith during her 2010 research cruise to investigate the immediate impacts of the oil spill. (Photo courtesy of the University of Georgia)

“Brine-influenced habitats are analogs to ancient habitats on the Earth,” explained Joye.

As a routine practice, all video collected during this and other GoMRI-funded sea-bottom video surveys are recorded with precise location information (geo-referenced) so multiple visits to the same location can provide information about changes in flora and fauna over time.

The Alvin will deploy from the R/V Atlantis. It can carry two scientists along with a pilot on dives of up to ten hours, bringing back pictures and water, sediment, and biological samples to be examined in the lab. Both parts of the mission will help scientists further understand the role both large and small amounts of oil play in fluid and sediment geochemistry and microbiology.

This research was made possible in part by a grant from BP/The Gulf of Mexico Research Initiative (GoMRI) to the Ecosystem Impacts of Oil & Gas Inputs to the Gulf (ECOGIG) consortium.  The GoMRI is a 10-year independent research program established to study the effect, and the potential associated impact, of hydrocarbon releases on the environment and public health, as well as to develop improved spill mitigation, oil detection, characterization and remediation technologies.  An independent and academic 20-member Research Board makes the funding and research direction decisions to ensure the intellectual quality, effectiveness and academic independence of the GoMRI research.  All research data, findings and publications will be made publicly available.  The program was established through a $500 million financial commitment from BP.  For more information, visit https://gulfresearchinitiative.org/.