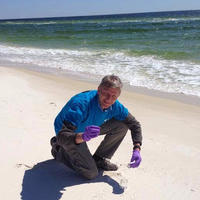 Eric Chassignet, professor of oceanography at Florida State and director of the Deep-C Consortium.

The BP/Deepwater Horizon oil spill dumped millions of gallons of oil and gas into the Gulf of Mexico nearly five years ago, but the effects still linger.

(From PHYS.ORG) — And now, high school students are teaming with world-class scientists to research the effects of the spill through a unique citizen-scientist program called the Gulf Oil Observers, aka Project Goo.

On Feb. 27, 40 high school students from the Marine Science Academy at Booker T. Washington High School in Pensacola, Fla., will join scientists and educators from Florida State University and the National Resources Officer at the Naval Air Station in Pensacola to scour local beaches for oil patties that formed as a result of the 2010 spill.

The students will collect samples of small, round clumps of sand mixed with crude oil. These “sand patties”—typically about a half-inch wide—can reveal how oil released in the ocean is degrading and how it is impacting the environment, scientists say.

“Working outdoors on a beach is a great way to get young scientists out of the classroom and into the field, where they often develop a strong bond to the work,” said Chris Reddy, a scientist at the Woods Hole Oceanographic Institution. “And when they know they are participating in something more than just another homework assignment, there is considerably more buy-in.”

The Deepwater Horizon oil spill is considered the largest accidental oil spill in the history of the oil industry, dumping roughly 4.9 million barrels—or 210 million gallons—of oil into the Gulf of Mexico.

BP, as part of its cleanup efforts, set aside millions of dollars for research. The Deep-C Consortium, which consists of 10 universities and research institutions, received a three-year, $20 million grant from the Gulf of Mexico Research Initiative (GoMRI) to conduct research and educational outreach.

This is the second time students have worked with FSU and Woods Hole researchers to search for oil patties. Last year, 25 students from West Florida High School of Advanced Technology joined researchers at a beach near Perdido Key to track samples.

“The Gulf Oil Observers project was designed to allow students to share in the excitement of scientific discovery,” said Eric Chassignet, professor of oceanography at Florida State University and director of the Deep-C Consortium. “Citizen scientist programs like this not only give students an opportunity to explore science, but also to relate to the environment in a meaningful way.”

Students, alongside mentors from FSU, will begin their day at the Naval Air Station at 8:30 a.m., partaking in about an hour of training. Then, for the next several hours, students will search the beach at the station for the patties.

While in the field, the students will learn and apply the scientific method and process as part of this on-going research into the effects of crude oil on the environment. Researchers will send the samples in glass jars to Woods Hole for analysis, and each student’s sample will receive a tracking number so that the students can follow the path of the patties and learn what scientific information they revealed.

GoMRI “In the news” is a reposting of articles about GoMRI-funded research (published by various news outlets). The author’s interpretations and opinions expressed in these articles is not necessarily that of GoMRI.