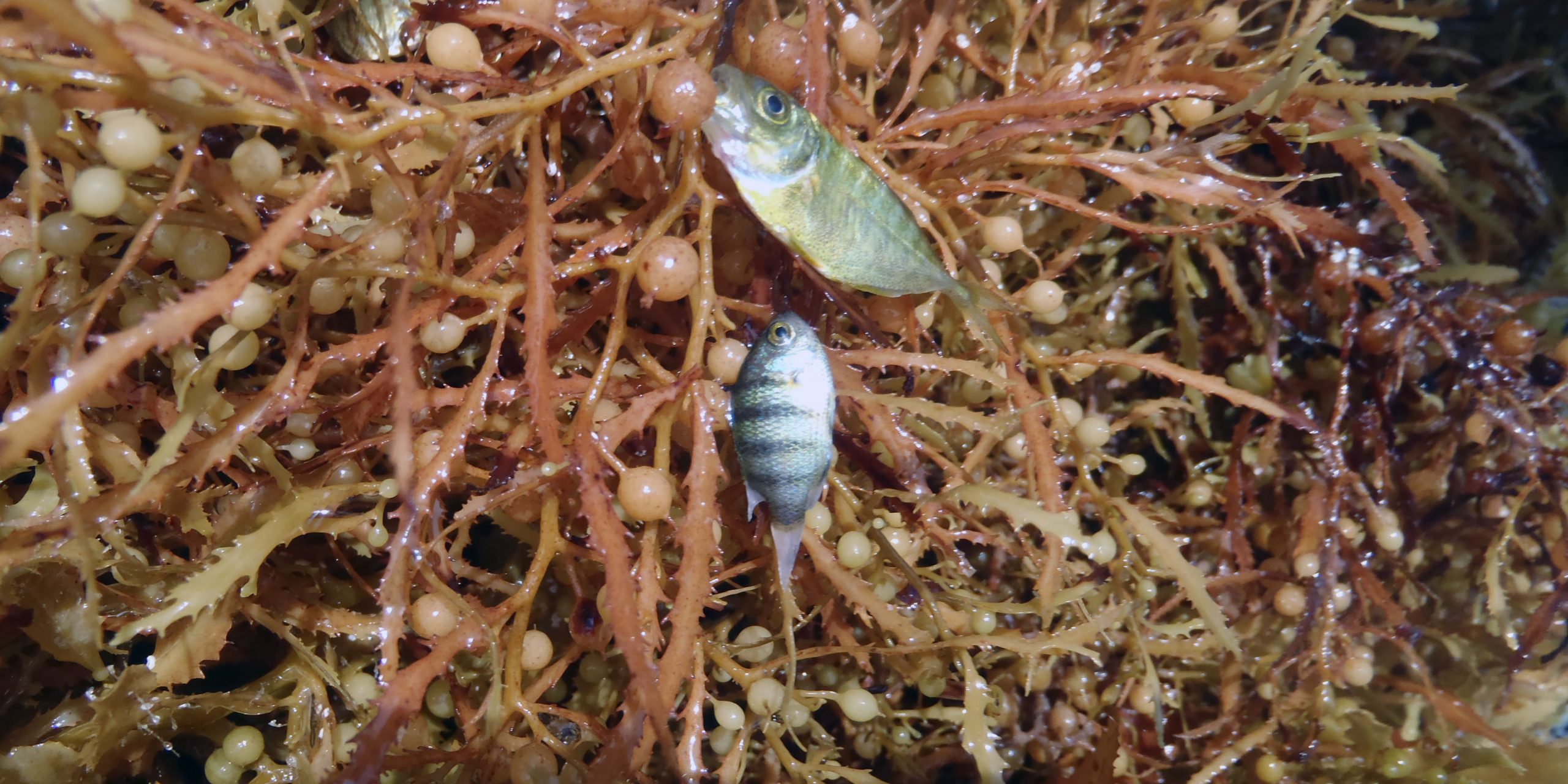 A floating mass of tangled seaweed might not look inviting, but for marine life in open Gulf waters it is critical for survival. Dr. Frank Hernandez with the Dauphin Island Sea Lab (DISL) leads a research team studying these important leafy algal communities to investigate the potential effects of the Deepwater Horizon oil spill on both flora and fauna.

Though often considered unsightly on popular beaches, Sargassum, more commonly known as “Gulf weed,” is a critical habitat for larvae and juveniles of many recreationally important species, including tripletail (“blackfish”), mahi mahi, tunas, billfishes and their fish prey (such as flying fishes and ballyhoo).

Sargassum provides an oasis of habitat in an otherwise featureless open ocean environment and potentially serves as a nursery for young fishes –F. Hernandez

With support from a Gulf of Mexico Research Initiative (GoMRI) Bridge Grant, Dr. Hernandez and Co-Principal Investigators Dr. Sean Powers (University of South Alabama) and Dr. Marcus Drymon (DISL) conducted twelve research cruises and seven aerial surveys during the summer of 2011. These researchers and their team of four graduate students, eight undergraduate interns, and ten technicians collected critical time-sensitive data on Sargassum, fishes, and invertebrates. This data collection builds on their pre-spill research as well as post-spill efforts funded by a NSF RAPID award. Hernandez also drew from his experiences with another oil-spill related study funded by a GoMRI Year One Block Grant. Hernandez and his team now have a collection of samples and imagery for use in future research comparing the impact of oil on the function and resiliency of this critical marine habitat.

The oil spill served as a reminder of how critical baseline data are to understanding such impacts. I have led a larval fish survey off the Alabama coast since 2004, and those data are now critical in assessing natural variability before, during, and after the spill as well as potential impacts from the spill itself. –F. Hernandez

A challenge for researchers studying the effects of the Deepwater Horizon oil spill is determining whether the variability they see in the marine ecosystem is caused by the oil spill or natural perturbations or some combination of the two. While the 2011 observations showed a decrease of Sargassum, Dr. Hernandez says that additional studies are necessary to understand other potential contributing factors such as riverine discharge and to detect longer-term impacts on the food web.

Video: Abundant marine life that dwell beneath a Sargassum mat.

Dr. Hernandez is a senior marine research scientist and teaching faculty in fisheries oceanography and larval fish ecology at DISL. He received his Ph.D. from Louisiana State University and his M.S from University of North Carolina, Wilmington. His research focuses on the biology and ecology of estuarine and marine fishes, primarily the early life history stages.

GoMRI Year One Grant: An Examination of Pre- and Post-Spill Ichthyoplankton Assemblage Dynamics.

This research was made possible by a grant from BP/The Gulf of Mexico Research Initiative (GOMRI). The GoMRI is a 10-year, $500 million independent research program established by an agreement between BP and the Gulf of Mexico Alliance to study the effects of the Deepwater Horizon incident and the potential associated impact of this and similar incidents on the environment and public health.