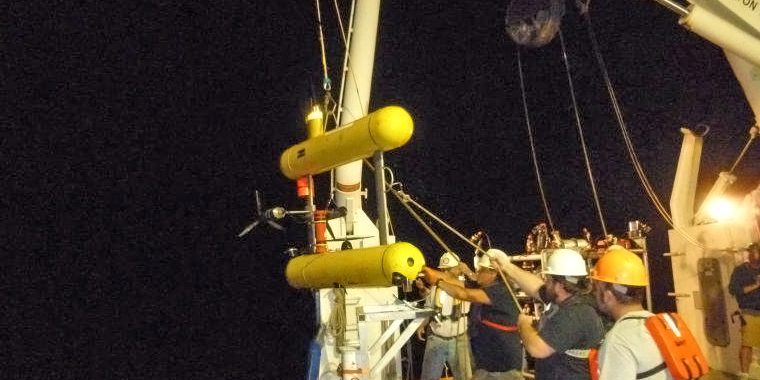 (Click to enlarge) The Mola Mola returns to the deck of the RV Pelican, completing its rescue. (Photo from Adam Boyette’s blog)

The Mola Mola, one of only six SeaBED class Autonomous Underwater Vehicles (AUVs) in the world will be in the Gulf of Mexico later this month as scientists survey the sea floor near the Macondo wellhead.

The capabilities of this state-of-the-art equipment would be newsworthy enough, but the Mola Mola experienced a life-threating malfunction during an expedition last fall. Researchers thought that it was lost to them forever. However, round-the-clock efforts for five days by a multi-university team of scientists, engineers, crew, and students turned this near tragedy into a demonstration of all the things that can go wrong during at-sea research—and everything that can go right.

In late August 2013, Chief Scientist Vernon Asper, a geological oceanographer and professor at the University of Southern Mississippi (USM) and director of the Undersea Vehicle Technology Center at the National Institute for Undersea Science and Technology (NIUST), embarked on a mission that would use two AUVs, the Mola Mola and the Eagle Ray, to collect data on natural seafloor oil seepages. The two AUVs complement each other, with the Eagle Ray providing broad mapping over large areas followed by the Mola Mola going “low and slow,” taking detailed pictures of identified points of interest. The study site is an underwater observatory of natural methane (hydrate) seeps, where gas freezes as it comes out of the ground, about 100 miles south of Pascagoula, Mississippi. The site has a multi-arrayed station that monitors hydrate formation and dissociation in real to near-real time and is supported by the Ecosystem Impacts of Oil and Gas Inputs to the Gulf (ECOGIG) consortium funded by the Gulf of Mexico Research Initiative.

(Click to enlarge) Everyone aboard the R/V Pelican cheers as the Mola Mola is finally safe on board—at 3 a.m. (Photo credit: Vernon Asper)

After a day of painstaking calibration and “pre-flight checks” for the AUVs, the team sailed to the study site on the RV Pelican. In calm seas, the Eagle Ray completed its two-day missions without a hitch followed by the launch of the Mola Mola; however, a small bit of rust on the electromagnet caused it to descend too soon. The team retrieved it, made repairs, and redeployed it. On September 3, the Mola Mola had been working on a routine mission for an hour at 1,200+ meters depth when it stopped moving and all communications ceased. AUVs are designed to float to the surface if a problem occurs. When the Mola Mola did not, the team knew they had a potential catastrophe on their hands.

A flurry of nerve-wracking on-the-fly decisions and long hours ensued as Asper worked with the team to devise a rescue plan. While hoping for success, the reality was that most likely the unresponsive AUV would be lost. This rescue hinged on the ability of people with different expertise and in different locations to collaborate quickly and effectively.

(Click to enlarge) The cavalry arrives! UM’s I-Spider and SSD are loaded onto the deck of the R/V Pelican via crane. (Photo from Adam Boyette’s blog)

Asper turned to engineers at the University of Mississippi (UM) over 400 miles away for help. USM and UM, both members of NIUST and ECOGIG, work together frequently and share the UAVs for research. “We asked Ole Miss (UM) to come and get it [Mola Mola] using their SSD (Station Service Device),” said Asper, “but it had just been completely taken apart for repairs.”

The engineering team of Matt Lowe and Steven Tidwell with UM/NUIST at Oxford recognized the seriousness of the situation and jumped into action. They made essential fixes, reassembled the SSD, loaded it and its underwater partner “I-Spider” on a truck, and drove seven hours to Cocodrie, Louisiana to meet up with Asper’s team—all within 24 hours. USM Ph.D. student Adam Boyette on board the RV Pelican said, “It seemed as though the cavalry had arrived!”

The I-Spider maintains a fiber-optic link between the SSD, used for recovery, and the surface ship, allowing operators to see what is going on at the seafloor. Even though all communication with the Mola Mola was lost, the team knew exactly where it was because it had an external transponder. However, the weather changed and they were operating in rough seas. The captain had to hold the 116 foot research vessel as still as possible over the site without anchoring – no easy feat – in order for the team to land the 1,500 pound recovery equipment at the right place.

(Click to enlarge) A tense moment in the control room as Chief Scientist Asper (L) and team watch the recovery attempt. (Photo from Adam Boyette’s blog)

Onboard was USM graduate student Michele Jordan, on her first research cruise, who said, “Watching the physical recovery of the tethered units, heavy equipment bouncing around, and men being held on-board by their work vests was a bit frightening.” She spoke of the “amazing” skill of the boat captain and the “thrilling” work of the scientists and engineers as they problem-solved. USM undergraduate student Ryann Dodd, also on his first research cruise, said, “The psychological aspect of working in an ocean environment is pretty intimidating when you realize you’re in water over 1,000 meters in depth and any chance of rescue will take a while.”

The team tried and failed two days in a row to rescue the Mola Mola. There were missed connections, equipment malfunctions, tangled cords, and time was running out. But they persevered, remotely operating the equipment underwater five-six hours for each attempt with additional time needed on deck to recharge batteries and make manual adjustments.

On the last day available, the team made another try, but two SSD thrusters stopped working. After hoisting it on deck, engineers welded wires and optical fibers and reconfigured the SSD to work with three rather than the normal five thrusters for one last attempt. This time the SSD landed within three meters of the AUV. “You could not ask for a better position – the Mola Mola was directly in front of us,” exclaimed Boyette.

(Click to enlarge) The Mola Mola adrift at 1,226 meters of depth through the eyes of the I-Spider. (Image credit: Max Woolsey / screen grab)

Everyone in the control room watched monitors with bated breath as the rescue unfolded. Lowe and Tidwell maneuvered the SSD’s snapping mechanism to the broad side of the Mola Mola. After a couple of passes, they successfully hooked onto the top ring of the AUV. Then they guided the SSD back into the I-SPIDER, secured the cables, and slowly began the recovery ascent. It was three in the morning when the equipment was on board, but the exhausted team erupted with joy – together, they had managed to accomplish what many thought was a lost cause.

Asper said it was hard to describe the feeling on board that night, “This is the only time I’m aware of a successful recovery. We were more than elated!” Student Jordan added, “The excitement each time the rescue vehicle was deployed was contagious, and I cheered like crazy when the connection was made.”

The unpredictables are tough, as Asper explained, “You can’t see the outcome and there are so many variables such as weather, not knowing what exactly is wrong, and running out of time.” Then there is the challenging work of handling the equipment, “The AUVs are graceful in the water but are like very expensive wrecking balls when hanging from a ship’s crane in seas,” said Roy Jarnagin, a USM/NUIST engineer.

(Click to enlarge) With a snap, the Mola Mola is secured and ready for rescue. (Image credit: Max Woosley /screen grab)

The scientists discovered that the Mola Mola’s pressure housing had flooded due to a faulty connector. Metal corrosion caused days of emotional lows and highs, much like the seas. Nine months later, engineers replaced the electronics, and now it is ready to complete the mission it started last August.

The four students who were part of this expedition gained experience and insights that cannot be taught in a classroom. Clayton Dike, a USM graduate student, was “impressed by the doggedness” of the team who had to “figure it out on the fly.” Jordan saw “how readily differing groups and universities are willing to muster for joined cause and how fabulous that is.” Dodd saw firsthand how “this technology is allowing us to explore hostile environments from the safe confines of our vessel.”

AUVs such as the Mola Mola allow scientists to “make measurements that were impossible only a few decades ago,” said Asper. The high resolution seafloor maps that result from the data AUVs collect help scientists understand ocean processes. Asper is studying these processes as they relate to the Deepwater Horizon oil spill which “has changed our lives and defined our careers because of the unprecedented opportunity it represents to learn more about America’s Sea, the Gulf of Mexico.”

This AUV recovery highlights the essential human component of technology use, as Jarnagin acknowledged, “Technology will certainly advance, but cannot replace the human creativity, ingenuity, curiosity and tenacity that lead to discovery and advancing knowledge.”

Arne Diercks, a USM geological oceanographer who has been on a number of expeditions with Asper, reported that the rescue mission is quickly becoming the stuff of marine science legend, saying, “Several dives, perseverance, a bit of luck, and an excellent team of scientists and ship operators made for a very happy ending.”

For more details and pictures about this expedition and rescue, read graduate student Adam Boyette’s blog.

This research was made possible in part by a grant from BP/The Gulf of Mexico Research Initiative (GoMRI) to the Ecosystem Impacts of Oil and Gas Inputs to the Gulf (ECOGIG) consortium. The GoMRI is a 10-year independent research program established to study the effect, and the potential associated impact, of hydrocarbon releases on the environment and public health, as well as to develop improved spill mitigation, oil detection, characterization and remediation technologies.  An independent and academic 20-member Research Board makes the funding and research direction decisions to ensure the intellectual quality, effectiveness and academic independence of the GoMRI research.  All research data, findings and publications will be made publicly available.  The program was established through a $500 million financial commitment from BP.  For more information, visit https://gulfresearchinitiative.org/.