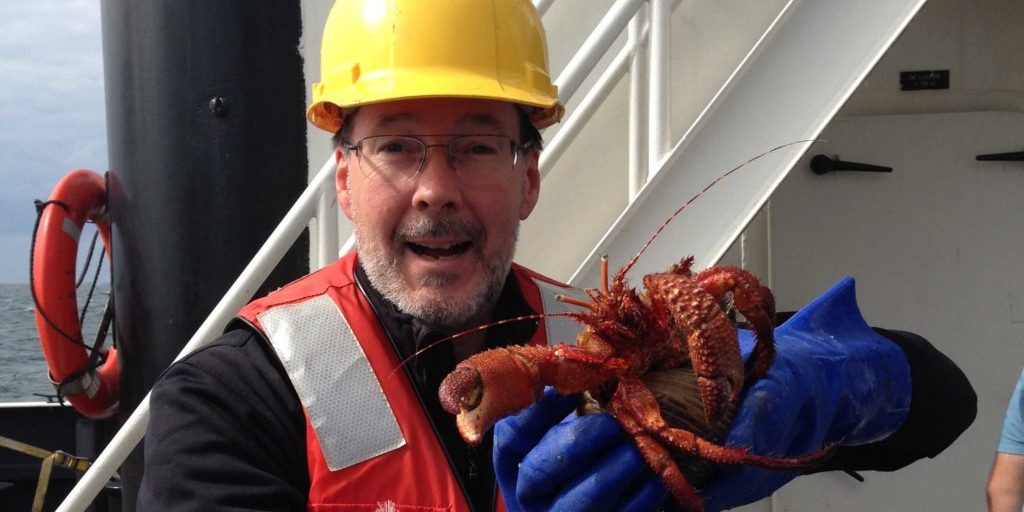 (From Spring 2015 Newsletter) Dr. Stephen Landers from Troy University answered a few questions about his RFP-II project, Analysis of Continental Shelf Meiofauna in the Northern Gulf of Mexico: Effects of the Deepwater Horizon Oil Spill Investigated During a Long-Term Community Study (2007-Present).

1. Thank you so much for taking the time to answer our questions! Tell us a bit about your research. What are the goals of your project?

My research involves the study of meiofauna, those microscopic animals such as nematodes that crawl around between the sand grains in the ocean floor. They provide food for larger animals and are an important component of the food chain. Since they can’t move very far, they are stuck in their local environment and can’t crawl or swim away from pollution or any change in habitat, and thus may be good indicators of the quality of the sediment in which they live. Our project goals were to sample sediment from multiple locations on the edge of the continental shelf, from central Louisiana to Apalachicola. From that sediment, we would look at population densities of the various meiofauna groups, we would focus on specific animals for taxonomic analysis, and we would analyze the sediment for pollutants and sediment grain characteristics, all to see if the meiofauna could tell us about the effect of the DHOS on the continental shelf habitat.

2. How do you collect your samples?

We are currently using a multicorer, which collects the sediment in tubes and keeps the sediment surface/seawater interface undisturbed. Most of the meiofauna are found in the top few centimeters of the sediment so this device is very helpful for our research. My lab collaborates with the NOAA/NMFS Pascagoula lab, and we cruise with them every fall to deploy the multicorer while they are doing a fishing survey.

3. What are you looking for in the animals to indicate they might have been impacted by the oil spill

We are looking for changes in population densities over time as the spill gets further into the past, as well as changes in species composition in the meiofauna communities.

4. What are some of the most significant or exciting findings so far in your work?

Our most interesting data relate to the discovery of new species of animals and new genus records of animals for the Gulf of Mexico. This documentation will establish a record of what animals are out there, to aid in future analysis when there is another man-made or natural disaster. To date, we have discovered over 15 new species of kinorhynchs (mud dragons) and have formally described two of them, which are deposited in the Smithsonian Institution (visit Science Corner on page 6 for the link to this publication). More species descriptions are in the works. Also, we have recorded 38 new genus records for nematodes (roundworms) that have not been reported before in the Gulf of Mexico (12 of those are now reported: http://www.pbsw.org/doi/abs/10.2988/0006-324X-127.1.47. The other 26 are in a new article being prepared for publication).

5. That is really interesting and having this expanded biodiversity record for the Gulf is really important! Your study began in 2007, prior to Deepwater Horizon. Have you been able to detect any changes to the populations that had been identified prior to the spill, after the spill occurred?

The area of the Gulf where my lab collects samples, on the edge of the continental shelf, has not revealed a detectable impact when comparing data from before the spill to data from Fall 2010. We are currently examining changes in species communities over time to see if the diversity in this area of the Gulf is shifting. Other studies certainly have shown meiofauna impacts either on the shoreline or close to the DWH site, so it will be interesting to compare our data with other reports.

6. What is your background and how did you get involved in this kind of work?

I am an invertebrate zoologist and protozoologist by training (Ph.D. NCSU 1990). I’ve published on a variety of protozoan species, mostly marine, and became involved in meiofauna work through a friend of mine, Dr. Frank Romano (Jacksonville State University). He was working on meiofauna, and we thought it would be fun to collaborate. Meiofauna are larger than protozoans (though very small to most scientists) so I was already comfortable with working with the really small stuff. We started our collaboration in 2007. Frank has since passed away, but I owe him credit for my involvement and interest in meiofauna research.

7. If funding were not an issue, what would you add to your project?

I would extend our biodiversity studies to include metagenomic analysis of the sediment, and DNA barcoding of specific larger meiofauna animals.