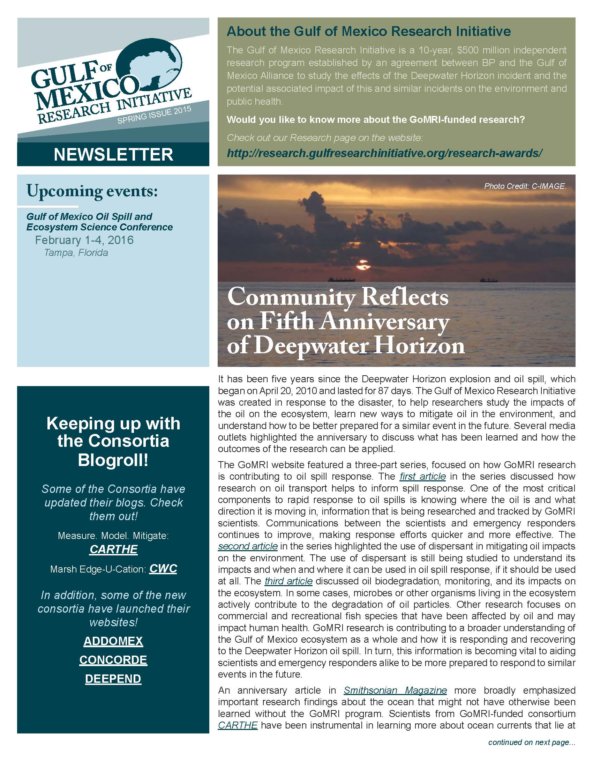 The Screenscope Films is developing “Dispatches from the Gulf” to help tell the story about the scientists involved in oil spill research and their studies to improve society’s ability to understand, respond to, and mitigate the impacts of petroleum pollution and related stressors to the marine and coastal ecosystems. The film will air later this year as a new episode of the Journey to Planet Earth Series. The “Dispatches from the Gulf” trailer can be found here.

In April 2015, the E/V Nautilus was diving on methane seeps in the Gulf of Mexico, an expedition for the GoMRI-funded Gulf Integrated Spill Response Consortium (GISR), when the ROV received a visit from a very inquisitive sperm whale! Check out the incredible video here!

Congratulations to the following members of the GoMRI community!

CARTHE’s Drones at the Beach video was featured in the last newsletter as the Clip of the Quarter; since then that video went on to win the Ocean 180 Video Challenge! The Ocean 180 Video Challenge was created to encourage ocean scientists to share their research with the general public. Nearly 38,000 middle school students from all over the world participated in judging the videos, and CARTHE’s video Drones at the Beach won first place in category one! GoMRI would like to congratulate CARTHE and everyone involved in the making of the video!

The Gulf of Mexico Research Initiative (GoMRI) is recognizing the graduate students whose vital research contribute to improving understanding about the damage, response, and recovery of the Deepwater Horizon oil spill. Candidates for this program must be graduate students who have participated in a GoMRI-funded project for at least one year, whose work is primarily funded by GoMRI, and who are working on a dissertation or thesis based on GoMRI-funded science.

To honor Women’s History Month in March 2015, Smithsonian’s Ocean Portal featured three interviews with GoMRI scientists, Lexi Tempkin, Nancy Rabalais, and Uta Passow. Click here to read their stories, learn more about how they got interested in science, and what they are working on now!

We are now on the BRIDGE!

GoMRI has partnered with the BRIDGE to help highlight education and outreach materials that can be of use to educators and the general public. The education resources are located on the BRIDGE website.