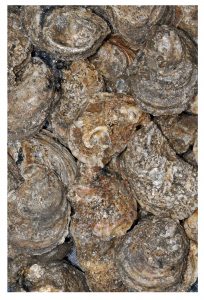 Separate groups of scientists studying the Deepwater Horizon oil spill impacts on oysters along the Gulf coast recently published their findings in two journals: the November 2012 issue of Environmental Science and Technology: Assimilation of oil-derived elements by oysters due to the Deepwater Horizon oil spill; and the December 2011 issue of Journal of Shellfish Research: Chemical and physiological measures on oysters Crassostrea virginica from oil-exposed sites in Louisiana.

Drs. Ruth Carmichael and Thomas Soniat led studies using the eastern oyster, Crassostrea virginica, as an indicator for potential oil spill effects on local food webs along Louisiana, Mississippi, and Alabama coasts. Oysters are a species of choice for ecosystem studies because they are economically and ecologically valuable to the Gulf region and because their tissue and shell act like powerful recorders of their environment. 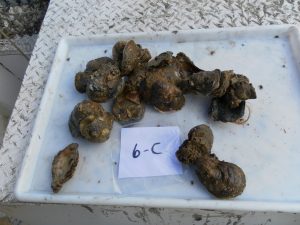 (Click to enlarge) Oysters collected at one of the sampling sites off the Louisiana coast. (Photo credit: Thomas Soniat)

indicate exposure to oil hydrocarbons, in new shell growth of oysters as well as in their tissue. Researchers analyzed stable isotopes in oysters and in suspended particulate matter available as food and compared them with weathered and fresh oil. Neither study found evidence of oil-related contamination at levels above prior background or pre-spill conditions.  Soniat’s results found that PAH levels, environmental conditions and reproductive capacity in oyster samples were similar in oiled and unoiled areas six months after the capping of the wellhead. Carmichael’s results found that oil-derived elements did not have a statistically significant influence on the stable isotope composition of oyster samples.

Soniat cautioned that his group’s results not be over applied because of the study’s spatial and temporal limitations. Carmichael suggested that her group’s findings have alternate possibilities including the oysters not consuming oil materials during their period of study or oyster samples consuming  too little to detect. Both studies point to complexities in interpreting and isolating potential effects of the Deepwater Horizon oil spill. 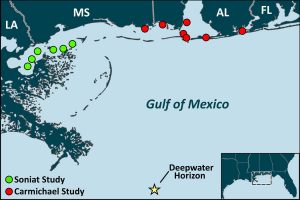 (Click to enlarge) Oyster sampling sites along the Gulf coast for studies led by Dr. Thomas Soniat and by Dr. Ruth Carmichael.

The study authors are:

This research was made possible in part by Grants from BP/The Gulf of Mexico Research Initiative (GoMRI) through the Alabama Marine Environmental Science Consortium and the Northern Gulf Institute . Other funding sources for the Carmichael, et al., study included the National Science Foundation REU program (2356JV).