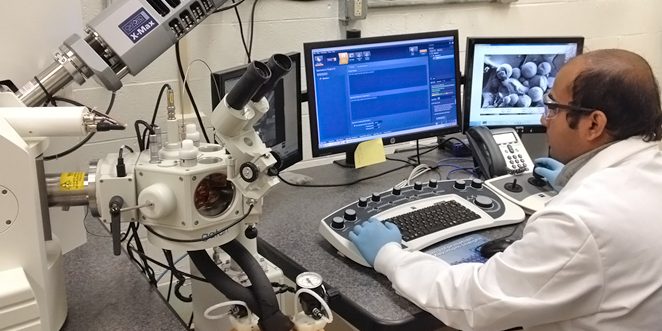 Scientists published their findings in the March 2013 issue of Applied Materials & Interfaces:  Oil emulsification using surface-tunable carbon black particles and the May 2013 issue of Langmuir: The response of carbon black stabilized oil-in-water emulsions to the addition of surfactant solutions.

Surfactant dispersants, such as those used during the Deepwater Horizon oil spill, are intended to accelerate natural dispersion and minimize damage by reducing floating oil at the sea surface and dispersing it into the water column where micro-organisms can consume it. However, surfactants become destabilized in large amounts of water, limiting bacterial consumption. Scientists are testing CB particles for use in oil spill remediation because of their established ability to stabilize emulsions, absorb toxins, and because they are generally regarded as nontoxic although their impact on microorganisms has yet to be determined. Dr. Arijit Bose, an author in both studies, said that even though particle-stabilized emulsions were discovered over 100 years ago, “the combination of CB particles and crude oil is new.” This new combination is the basis of these two studies.

The study in Applied Materials and Interfaces focused on the stability of oil-water emulsions created using CB particles and its ability to absorb PAHs. The team compared the emulsifications of seawater-in-crude oil (from the Macondo 252 spill) using CB particles and COREXIT 9500A, characterizing them and examining particle configurations at the oil-water interfaces. In laboratory scale experiments, the CB particle-created emulsion was more stable – even after leaving it in the lab for six months, it did not show “any phase separation or changes to the volume of the emulsion phase over this time period.” In contrast, an emulsion using COREXIT 9500A “destabilizes in about an hour.” Investigating more deeply, researchers isolated AOT, a component in COREXIT 9500A, and found that when it alone was added to crude oil, a water-in-oil emulsion formed. To test the ability of CB particles to absorb PAHs, researchers added naphthalene, a model cyclic hydrocarbon, to the mix. Naphthalene “adsorbed significantly” and “its transport into the continuous water is markedly reduced.” Dr. Bose clarified that, “We are not stating that CB is ‘better’ than COREXIT; however, using CB particles on crude oil provides a class of emulsion stabilizers that would likely be bio-friendly and could sequester harmful PAHs.”

The study in Langmuir also created oil-water emulsions with CB particles but then introduced different types of traditional molecular surfactant dispersants to better understand the mechanics of how they interact. They found that, dependent on which type of surfactant was used, the surfactant displaced some CB particles at the oil-water interface, although the emulsion itself remained stable. Researchers noted that the CB particles exited the interface in two distinct patterns – one where particles streamed away steadily and another where particles dispersed in intermittent clusters, both “over time scales of the order of seconds.” The study states that, “Our analysis and experiments suggest modes for particle displacement from these interfaces that have not been observed previously.” Dr. Bose noted, “We showed that adding common surfactants to a CB stabilized emulsion can cause the particles to leave the oil drops but the emulsion remains stable.”  Their work continues on identifying situations where using both particles and surfactant together would be effective in an oil spill application as well as understanding the significance of the sequence in which surfactants and particles are added.

CB particles offer a different method of stabilizing oil-water emulsions in the water column that could potentially be effective in lower quantities and with fewer environmental ramifications than traditional dispersants, safely keeping oil together in water so that bacteria can consume more of it over a longer time period. Both studies indicate a need to look more closely at CB particles used either alone or in conjunction with a traditional surfactant as a potential improved resource for oil spill response.

This research was made possible in part by a Grant from BP/The Gulf of Mexico Research Initiative (GoMRI) to the Consortium for the Molecular Engineering of Dispersant Systems (C-MEDS). Other funding sources included the National Science Foundation CBET 0854115, 1043163, and 1049330.

The GoMRI is a 10-year, $500 million independent research program established by an agreement between BP and the Gulf of Mexico Alliance to study the effect, and the potential associated impact, of hydrocarbon releases on the environment and public health, as well as to develop improved spill mitigation, oil detection, characterization and remediation technologies.