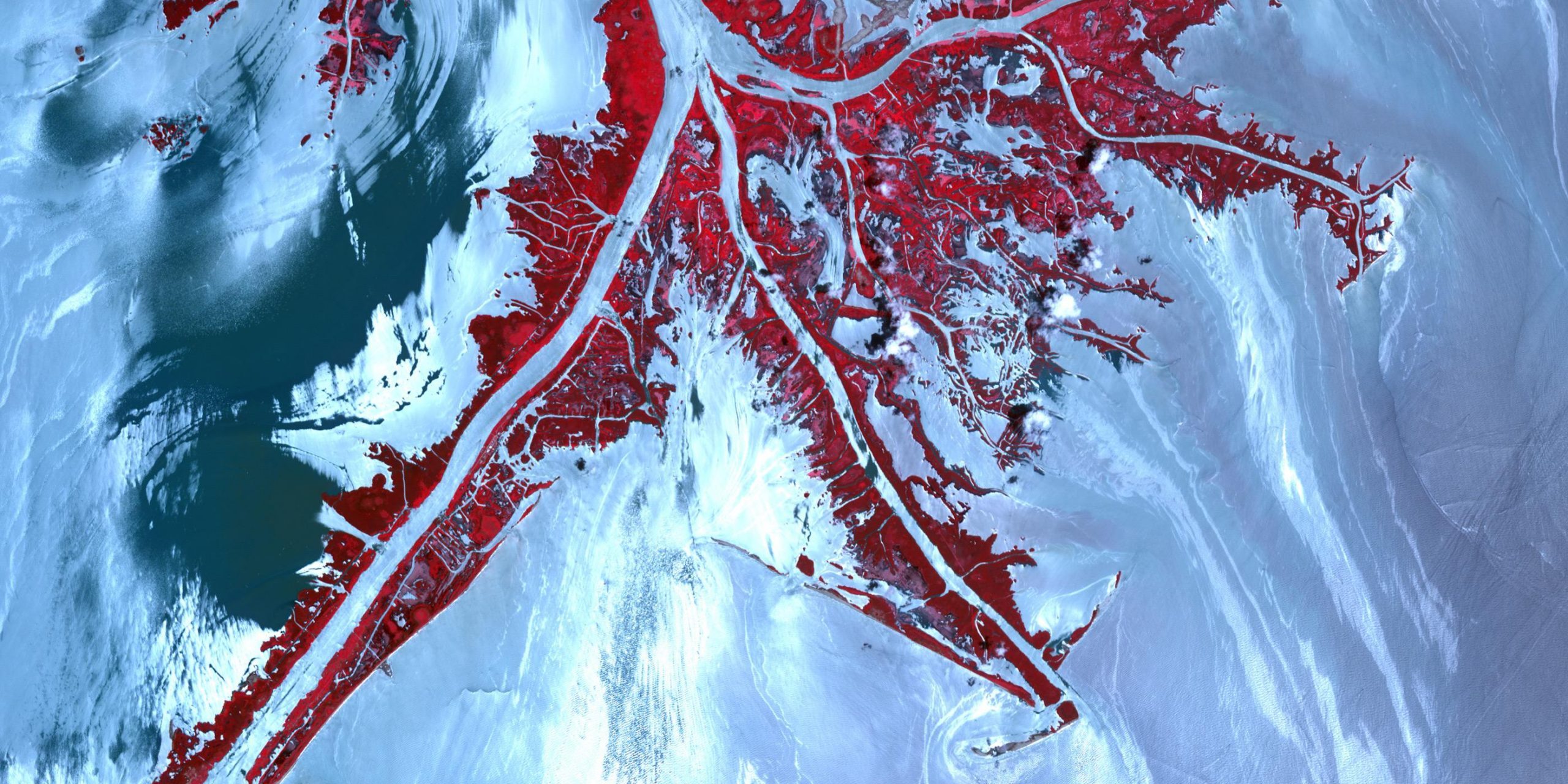 (Click to enlarge) Oil from the Deepwater Horizon spill laps around the mouth of the Mississippi River delta in this May 24, 2010, image from the Advanced Spaceborne Thermal Emission and Reflection Radiometer (ASTER) instrument on NASA’s Terra spacecraft. The oil appears silver, while vegetation is red. (Image credit: Jesse Allen/NASA/GSFC/METI/ERSDAC/JAROS, and U.S./Japan ASTER Science Team)

Scientists from the University of Miami used a high-resolution prediction model to study the relationship between the Mississippi River and the Deepwater Horizon oil spill.

Simulations showed that the Mississippi River plume created rapidly changing circulation patterns and fronts that influenced the direction of surface oil, guiding some towards the Louisiana-Texas shelf and shielding some from the Mississippi-Alabama-Florida shelf.

The researchers published their findings in the October 2013 Journal of Geophysical Research: Oceans: Influence of Mississippi River induced circulation on the Deepwater Horizon oil spill transport. The study marks the first time scientists tracked a large river plume in relation to the surface spreading of a deep water oil spill and provides new information on contaminant behavior in the Gulf.

The location of the incident site led disaster responders to consider the possibility that flooding the Mississippi River might help initially divert the oil from coastal marshes. However, no operational computer models with detailed river plume dynamics existed to predict the environment’s reaction to flooding.

To understand the influence of Mississippi River waters and quantify connecting patterns of river and oiled waters, researchers developed a high-resolution northern Gulf of Mexico model with daily freshwater inputs from all major rivers and detailed representation of the river plume development under the influence of winds, the complicated northern Gulf topography, and also the Loop Current system. Dr. Kourafalou, lead author of this study, explained, “Since the Gulf of Mexico is a complex ocean system and the oil spill was near the Mississippi Delta, we had to carefully account for both the offshore and coastal currents, which are largely dominated by the Mississippi River plume.” For this study, they added observational data on marine and atmospheric conditions from that region and daily satellite images of the surface slick.

The model showed that periods of increased Mississippi output during May and June of 2010 resulted in “enhanced buoyancy-driven currents and created frontal zones that contributed to the overall evolution of the near-surface oil patch.” Oil movement “showed a remarkable relationship with the Mississippi River discharge which was maintained throughout the entire oil spill period” (well leakage to capping). Patterns of the river plume and surface oil had a “close synergy that followed the variability in Mississippi River discharge and wind patterns,” indicating a “strong relation” between the outflow rates and oil transport.

Researchers noted that while wind was a “main forcing agent” of the drifting oil, their study “established characteristic pathways that governed the parallel evolution between the Mississippi River plume and oil laden waters,” identifying “different aspects east and west of the Mississippi Delta.” The researchers’ data-validated model is now part of an Earth System modeling framework to help inform future response decisions.

This research was made possible in part by a Grant from BP/The Gulf of Mexico Research Initiative (GoMRI) to the Deepsea to Coast Connectivity in the Eastern Gulf of Mexico (DEEP-C) Consortium. Other funding sources included the National Science Foundation OCE-0929651.