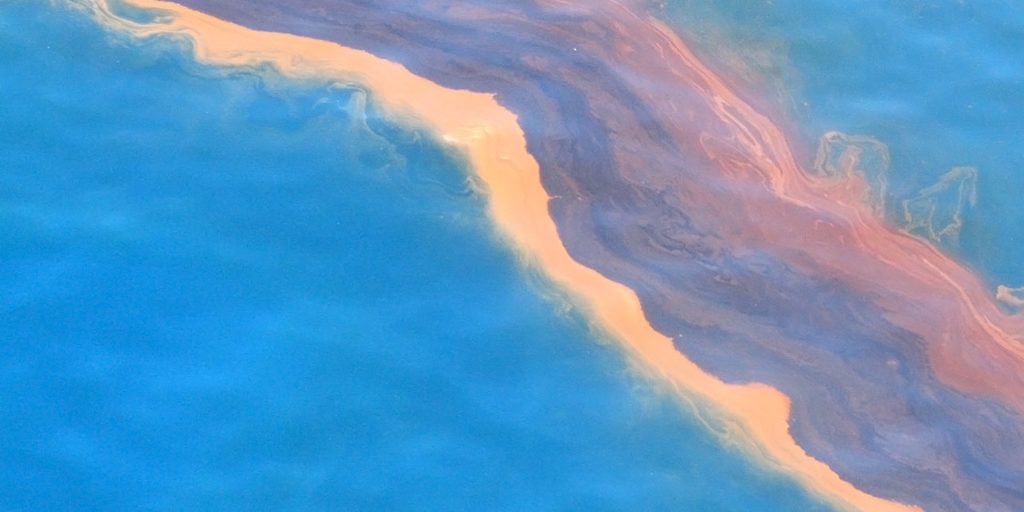 (Click to enlarge) Heavy band of oil seen during an overflight in the Gulf of Mexico on May 12,2010. (Credit: NOAA)

Scientists at Florida State University are examining the mechanics behind oil transport, including changes to Sea Surface Temperature (SST) and the roughness of surface water that an oil slick could affect.

They found that a slick, by increasing SST gradients and decreasing surface roughness, had the potential to change “boundary layer processes.” These changes could influence wind speed, divergence, spin, and transport direction and “hence oil motion itself.” Researchers published their findings in the March 2013 issue of the Journal of Applied Meteorology and Climatology: Influences of sea surface temperature gradients and surface roughness changes on the motion of surface oil: A simple idealized study.

Oil on surface water makes the surface smoother than it would be if no oil were present, causing winds that blow over an oil slick to experience less friction than when the surface is oil free. Oil absorbs more sunlight than water, causing surface temperatures to be hotter over an oil slick than over water where there is no oil. These effects of oil on “air-sea boundary surfaces” are not currently accounted for in transport prediction models. So, using the University of Washington planetary boundary layer (UWPBL) model, researchers set up a “highly idealized simulation,” with conditions similar to those during the Deepwater Horizon incident, and incorporated parameters for the small-scale processes of SST gradients and surface water roughness. Understanding the effect of these two processes on oil movement could improve predictions of its path, making for better response efforts.

The simulations indicated significant connections between increasing SST gradients and changes in surface roughness with changes in wind and transport, influencing the direction and speed of surface-oil movement.  Changes in surface roughness caused wind speed to increase over an oil slick because a slick “strongly dampens the surface water waves that dominate the roughness.” Additionally, the effects of an oil slick on surface wind divergence (flow of air that causes a downward motion) and wind stress curl (vertical transport due to upwelling over a horizontal distance) caused changes in atmospheric and oceanic secondary circulations.  Results indicated a linear relationship between “the magnitude of SST gradients” and increased changes to “wind stress curl and Ekman transport [currents driven only by wind] in the transition zones [of oil-free water and an oil slick].” Results also showed that changes in surface roughness and SST gradients produced a “net convergence in the surface oil area, which can cause contraction of the surface oil.” Higher SST gradients were closely associated with “both the direction and speed of surface oil movement.”

In their discussions, the researchers suggested that their findings on the “influence of strong SST gradients and changes in surface roughness could be important to the motion of the oil slick itself” and “may be useful for building complex oil-tracking forecast models.” They also advised that “results should be validated with field data.”

This research was made possible in part by a Grant from BP/The Gulf of Mexico Research Initiative (GoMRI) to the Deepsea to Coast Connectivity in the Eastern Gulf of Mexico (DEEP-C) Consortium. Other funding sources included the National Aeronautics and Space Administration Physical Oceanography support of the Ocean Vector Winds Science Team.