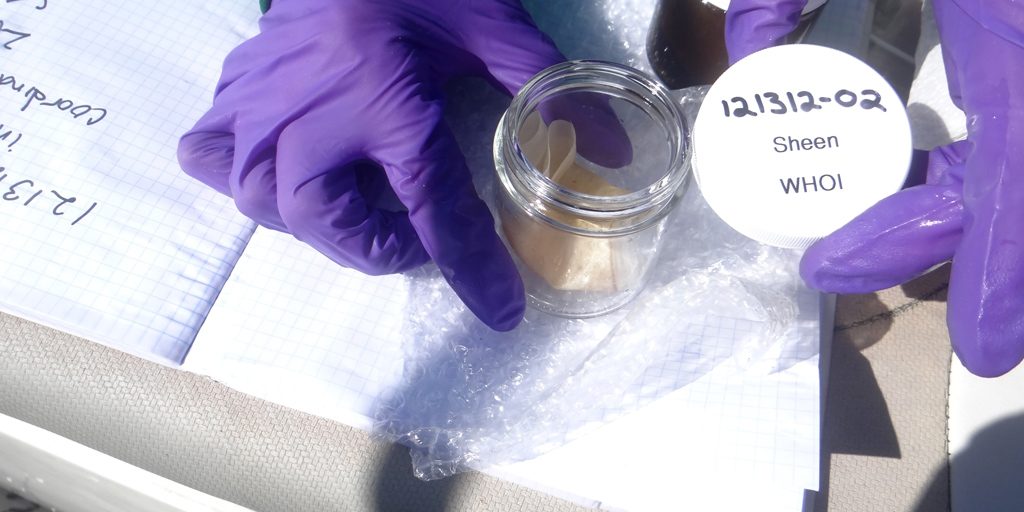 (Click to enlarge) After researchers retrieved oil-coated screens used to collect samples from surface sheens, each screen was sectioned into several pieces for analyses. Some were reserved for DNA extraction; others analyzed for drilling fluids and shared with the National Oceanic Atmospheric Administration for standard petrochemical analyses. (Photo by Christoph Aeppli, Woods Hole Oceanographic Institution)

Scientists from Woods Hole Oceanographic Institution and University of California, Santa Barbara used a novel fingerprinting technique to identify the source of oil sheens that appeared in late 2012 near the site of the Deepwater Horizon disaster.

The sheens contained a mixture of Macondo well oil and alkenes (commonly called olefins) that are used in drilling operations. Researchers found that the sheens most likely came from pockets of Macondo well oil that were on the rig before it exploded and are now in the debris field on the ocean floor. They also showed conclusively that the oil was not leaking from the Macondo well which was “shut-in” in the summer of 2010. They published their findings in the June 2013 issue of Environmental Science & Technology:  Recurrent oil sheens at the Deepwater Horizon disaster site fingerprinted with synthetic hydrocarbon drilling fluids.

In mid-September 2012, the US Coast Guard received reports from BP of oil sheens near the site of the Deepwater Horizon incident. There was concern that the Macondo Well, capped in July 2010, might be leaking. Identifying the source of the oil was important because of environmental and legal issues and also to estimate the magnitude of the problem and inform the response process.

This study’s research team has been analyzing the chemical makeup of Deepwater Horizon oil since the incident began. Several years before the incident, they patented a highly-sensitive and accurate method to detect and identify alkenes found in drilling fluids (lubricants that aid the process of drilling for oil) using “comprehensive two-dimensional gas chromatography.” They developed this patent for the petroleum industry, but this was the first time they used this technique to address an environmental issue. Since drilling-fluid alkenes are not present in crude oil or natural seeps, and thus not in the oil that was released from the broken blowout preventer (drilling operations were over at that time), being able to identify these alkenes provided the team with a means to use them as a fingerprint to determine the sheens’ source.

The team collected 14 samples (taken in October and December, 2012) from the new sheens. They compared these samples to oil and chemicals from the Macondo well, the cofferdam (the device used in an attempt to cover the Macondo well in May 2010), drilling fluids, oil slick and oiled field samples, and floating rig debris (a broken piece of the riser assembly collected in May 2010 which had drilling fluids). Analysis of chemical biomarkers (measurable characteristics that indicate the presence of a chemical compound) showed the presence of Macondo well oil and drilling-fluid alkenes in all sheen samples and in the floating rig debris. There were no alkenes in oil from the cofferdam or in beach samples that the team have been collecting and analyzing since the disaster.  These findings pointed to the source of the sheens as most likely “an oil/drilling mud mixture [that] originated from the DWH wreckage site” and that the source was a “finite volume of oil, rather than a leaking well.” The researchers also analyzed the spatial pattern of how the sheens evaporated, looking for areas with the least amount of evaporation. They determined that the sheens “surfaced closer to the DWH wreckage than the cofferdam site.”

(Click to enlarge) The research team’s second sampling expedition in December 2012, was more challenging due to the close proximity of a BP survey vessel, Olympic Triton, which was operating two ROVs, and a mobile offshore deep drilling unit. The rig and vessel each require a reasonable stand-off distance for safety precautions. WHOI’s Chris Reddy is shown here, with the drilling rig behind him. (Photo by Christoph Aeppli, Woods Hole Oceanographic Institution)

In their discussions, researchers suggest that “drilling mud olefins are a powerful forensic tool” and “provide a framework for assessing the fate of drilling fluids released during hydrocarbon exploration and other activities around the globe.”

Additionally, researchers described this work as having another “victory.” They, as members of academia, were able to play a key role with multiple stakeholders, working closely with industry (BP) and federal agencies (U.S. Coast Guard, NOAA).  The science team operated with transparency, alerting the government and BP about their research plans. All stakeholders sought to determine the source of the oil, though each required a different level of certainty about the results, and each had different questions to answer.

Dr. Christopher Reddy said, “The long lasting impacts of this effort were highlighting that academia can play a useful role during a crisis. We can be unbiased and collaborative without losing our integrity. What is lost on many of our colleagues is that interacting with representatives of the government and BP provided advice and input that improved our research. This is a win-win.”

This research was made possible in part by grants from BP/The Gulf of Mexico Research Initiative through the Deep Sea to Coast Connectivity in the Eastern Gulf of Mexico (Deep-C) Consortium. Other funding sources included the National Science Foundation (EAR-0950600 and OCE-0961725 to DLV and EAR- 0950670, OCE-0960841 and OCE-1043976 to CMR). C.A. acknowledges a Swiss National Science Foundation Postdoctoral Fellowship.

The GoMRI is a 10-year independent research program established to study the effect, and the potential associated impact, of hydrocarbon releases on the environment and public health, as well as to develop improved spill mitigation, oil detection, characterization and remediation technologies.  An independent and academic 20-member Research Board makes the funding and research direction decisions to ensure the intellectual quality, effectiveness and academic independence of the GoMRI research.  All research data, findings and publications will be made publicly available.  The program was established through a $500 million financial commitment from BP.  For more information, visit https://gulfresearchinitiative.org/