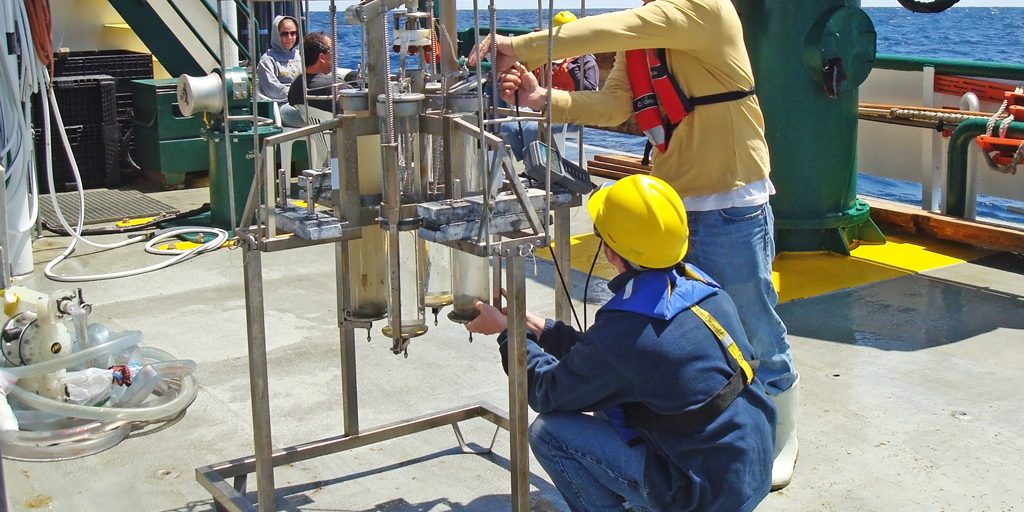 Scientists measured the natural abundance of radiocarbon (14C) in sediments near the Deepwater Horizon spill site and estimated the location and amount of carbon derived from crude oil or gas.

Their best estimate was that oil-derived carbon equivalent to 3 – 4.9 percent of reported oil from the 2010 spill may be accounted for by carbon found in the sediments. Most of the deposited petrocarbon (authors defined as oil, gas, and organic compounds produced from chemical and biological alteration of oil and gas) was located southwest of the spill site where oil plumes were observed in the water column. They published their findings in the January 2015 issue of Environmental Science & Technology: Using natural abundance radiocarbon to trace the flux of petrocarbon to the seafloor following the Deepwater Horizon oil spill.

A Federal interagency group developed an oil budget calculator and estimated oil fate as recovered at well head (16-17%), naturally dispersed into the water column (12-13%), evaporated or dissolved (20-25%), chemically dispersed into the water column (10-20%), burned (5-6%), skimmed (2-4%), and “other” (11-30%). The purpose of this study was to estimate the amount considered as “other” that various mechanisms could have deposited as oil carbon or carbon derived from decomposed oil to the seafloor. Several possible oil-to-seafloor deposition mechanisms include hydrocarbon interactions with particulate matter, black carbon ash from burning slicks, zooplankton fecal pellets containing hydrocarbons, subsurface oil plumes, and microbes converting hydrocarbons into biomass.

A mix of carbon types (C12, C13, and the radioactive C14 isotope) is used to identify the origin of the carbon. Recently deceased organisms that accumulate carbon when alive would have these carbon types present, but with diminishing traces of C14 over time as the radioactive carbon decays. Oil that is millions of years old would not have any C14 present. Sediments containing carbon types in a ratio similar to that in the atmosphere are assumed to be from relatively recent primary production, typically the product of dead animals and plants falling from the water column.   Sediment derived from soils and sediments coming from rivers would be somewhat older, or radiocarbon depleted. Organic materials that are 14C free are considered as coming from crude oil or gas that are millions of years old, referred to as “petrocarbon” by scientists in this study.

The research team collected sixty-two sediment samples from October 2010 to August 2012, encompassing 9,266 square miles around the spill site. They avoided areas of known natural oil seeps, another source of petrocarbon. Evidence for petrocarbon deposition was found in 35% of the area. Because oil undergoes chemical changes as it weathers, the team used the absence of C14 in sediment to estimate the amount of petrocarbon deposited after the spill. They selected this isotopic approach as it offered a proxy for various carbon compounds and did not rely on identifying specific oil-derived compounds, many of which may have been chemically altered by microbial activity, weathering and other physiochemical processes. Petrocarbon from the oil spill as a source can be considered as consistent with their results, though they did not specifically identify the carbon as coming from the Macondo well. The results, however, were consistent with a similar study recently published by Valentine et al., 2014 which used a hopane tracer.

The study’s lead author, Jeff Chanton, said that sediments on the seafloor may serve as long-term storage for petrocarbons because the reduced oxygen and cold temperatures slow the decomposition rate. Petrocarbons in sediment potentially could reenter the water column either by chemical or natural physical processes including benthic predation, chemical degradation, and infaunal mixing. The knowledge of how much petrocarbon stays in the sediment and its decay rate after an oil spill is an important step in gaining a better understanding of potential long term environmental effects.

At the time of this study, the accepted number of barrels released for analyses purposes during the oil spill was approximately 5 million, which the scientists used in their calculations. In January 2015, the U.S. District Court for the Eastern District of Louisiana set the figure at approximately 3.19 million barrels.

This research was made possible in part by grants from BP/The Gulf of Mexico Research Initiative (GoMRI) to the Deep Sea to Coast Connectivity in the Eastern Gulf of Mexico Consortium (Deep-C), The Ecosystem Impacts of Oil and Gas Inputs to the Gulf (ECOGIG) consortium, the Northern Gulf Institute, the Consortium for the Advanced Research of Transport of Hydrocarbon in the Environment (CARTHE), and the Center for Integrated Modeling and Analysis of Gulf Ecosystems (C-IMAGE).

The GoMRI is a 10-year independent research program established to study the effect, and the potential associated impact, of hydrocarbon releases on the environment and public health, as well as to develop improved spill mitigation, oil detection, characterization, and remediation technologies. An independent and academic 20-member Research Board makes the funding and research direction decisions to ensure the intellectual quality, effectiveness and academic independence of the GoMRI research. All research data, findings and publications will be made publicly available. The program was established through a $500 million financial commitment from BP. For more information, visit https://gulfresearchinitiative.org/.