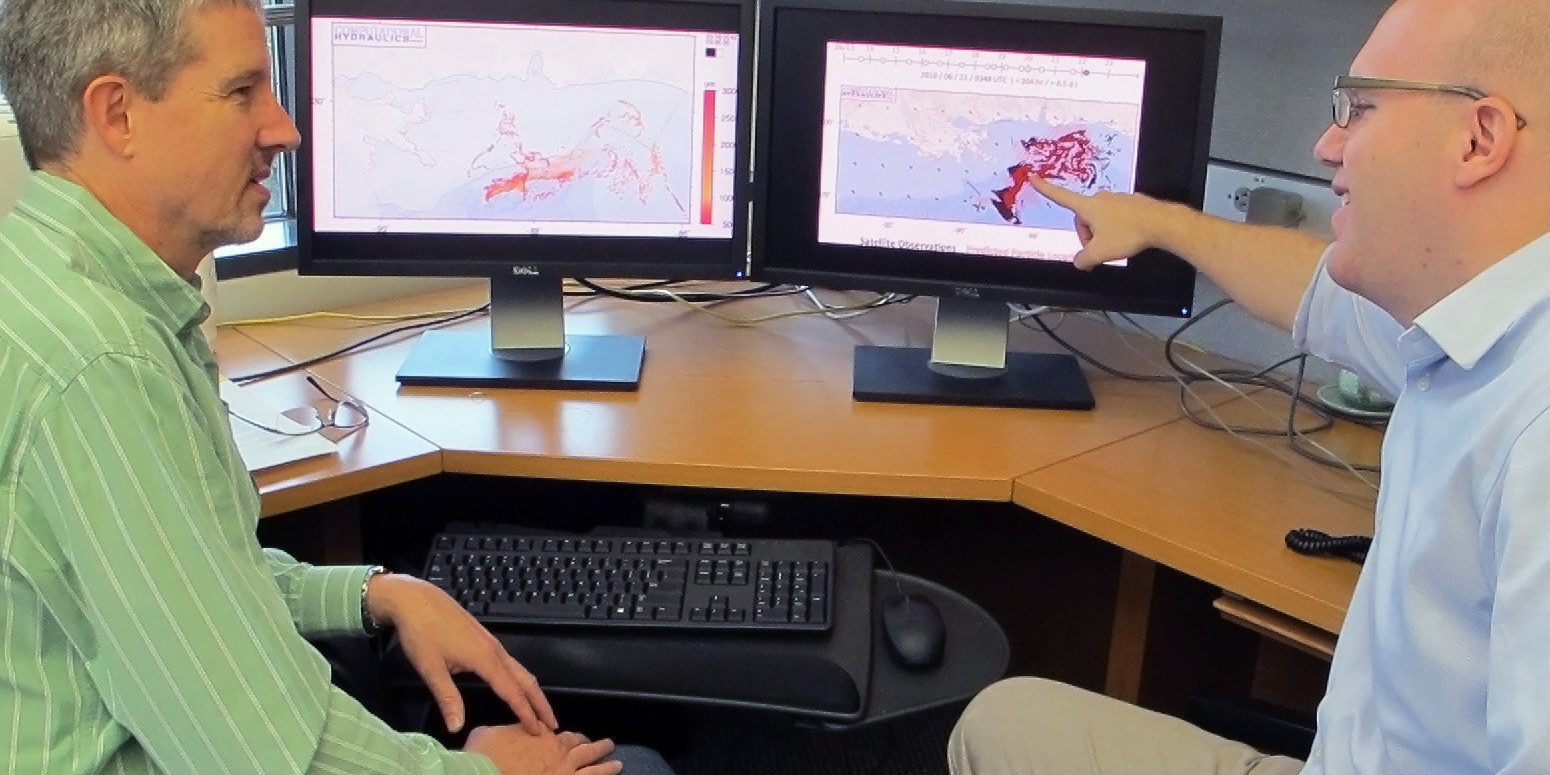 (Click to enlarge) Professor Clint Dawson and researcher Casey Dietrich discuss ways to improve the modeling of surface oil transport into the beaches of Mississippi and Louisiana. Dawson and Dietrich are members of the CARTHE. (Photo provided by Casey Dietrich)

They found that the coupled SWAN wave and ADCIRC circulation model simulations combined with a Lagrangian particle tracking model were in agreement with satellite images of observed oil “60% [of the time] or greater even after a week of simulated transport.” They published their findings in the June 2012 edition of Continental Shelf Research: Surface trajectories of oil transport along the Northern Coastline of the Gulf of Mexico.

During the 2010 oil spill, emergency responders needed forecasts of where oil would go given different scenarios and weather conditions, not just information of current oil location. Forecasts had to account for this first-time situation of oil coming from a deep water source and thus, “the important processes that contribute to oil movement in deep water, on the continental shelf, and within the complex nearshore environment.” Forecasters used the coupled SWAN (Simulating Waves Nearshore) and ADCIRC (Advanced CIRCulation) models to simulate currents that accounted for tides, rivers, winds, and waves. They adjusted their models with data from Lagrangian particle tracking to simulate “short-term (less than 1 week) oil movement.”

(Click to enlarge) Comparison of modeled oil transport with observations from satellite imagery for a simulation during June 2010. (Image provided by Casey Dietrich)

To evaluate the accuracy of these projections in hindsight, researchers compared satellite imagery with forecasts of surface oil transport. The team included two time frames in their analysis, one during fair weather conditions (June 13-23, 2010) and another during Hurricane Alex (June 29 – July 5, 2010), which moved over the southern Gulf.  Their results showed that “the system of models reproduces faithfully these observed features, and there is a good match to imagery when available.”  They also found that “the oil particle tracking responded best when the SWAN+ADCIRC computed currents were the sole forcing,” explaining that the addition of wind velocity as a direct forcing caused oil transport predictions to be “exaggerated in both deep and shallow water.” Given this information, the team then used the models to show how oil would have impacted the coastline had storms with the magnitude of Hurricane Katrina (2005) or Ike (2008) moved through the area of the spill. Under these conditions, their results show that “oil would have moved father into the marshes of southern Louisiana or farther along the shelf toward Texas than actually occurred during the spill.”

In their discussions, researchers suggest that future studies should focus “on an improved description of the physical, biological and chemical processes that transport oil in the nearshore.”  They also express the importance of improvements in the areas of accuracy and efficiency in order to have “high-fidelity and timely forecasts” for emergency managers.

This research was made possible in part by a Grant from BP/The Gulf of Mexico Research Initiative (GoMRI) through the Consortium for Advanced Research on Transport of Hydrocarbon in the Environment (CARTHE). Other funding sources included the National Science Foundation Office of Cyber Infrastructure #1042314 and the U.S. Department of Homeland Security #2008-ST-061- ND0001.