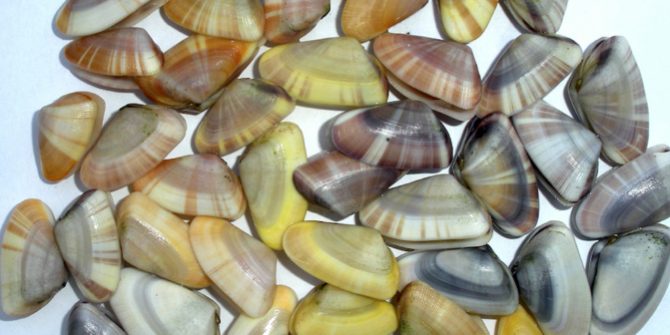 (Click to enlarge) A Coquina clam is shown to the left. On the right is undergraduate student Gracie Barnes working under a laboratory hood conducting analysis. (Photo provided by R. Synder)

Scientists from the University of West Florida found that Coquina clams could be used to detect biologically available oil in Florida surf zones.

They found that these small surf-zone clams retained polycyclic aromatic hydrocarbon (PAH) levels at higher concentrations and longer than surrounding sand particles did, indicating the species could help monitor pollutants along shorelines. They published their findings in the June 2014 Marine Pollution Bulletin: PAH concentrations in Coquina (Donax spp.) on a sandy beach shoreline impacted by a marine oil spill.

Following the Deepwater Horizon spill, oil mats washed ashore and storms and tides moved some oiled material back into the surf zone. To determine if toxins persisted, scientists sought “a biological indicator of contamination sensitive enough to measure trace amounts of PAHs from hydrocarbon contamination.” Many filter feeders, such as mollusks, absorb pollutants through direct contact with contaminated water and suspended particles, and researchers can test them for evidence of such contaminants. The small clams that burrow into the intertidal and subtidal sands have been successfully used as pollution indicators in beach areas around the world. Therefore, scientists chose to analyze the most abundant clam species along Florida beaches – the Coquina clams Donax variabilis and Donax texasianus – to complement analysis of surf zone sand samples.

Researchers collected clam samples near Pensacola between fall 2010 and May 2012 and tested them for PAHs found in Macondo oil. The oil residues they found were “significantly weathered” and the PAH profile “shifted to heavier and less volatile molecules,” characteristic of tar mats found on the sampled beaches. The averaged PAH composition in clams compared with sand showed “an enrichment of naphthalenes in tissues and lower amounts of phenanthrenes than in sand.” PAH concentrations in sand were highest immediately after oil landed on the beaches, but never rising above Florida Department of Environmental Protection sediment contamination guidelines, and then declined quickly. PAH concentrations in clams followed a similar pattern, but their decline was less abrupt, providing “an indication of biologically available pollutants and their attenuation.”

In their discussions, researchers suggested that using clams to monitor contamination could be useful in “overall trends analysis.” They concluded that Coquina clams may be a “sensitive indicator of PAHs” and provide a “practical way of monitoring low levels of pollutants along sandy shorelines within its range.”

This research was made possible in part by grants from BP/The Gulf of Mexico Research Initiative (GoMRI) to the Center for Integrated Modeling and Analysis of Gulf Ecosystems (C-IMAGE), the Deepsea to Coast Connectivity in the Eastern Gulf of Mexico (Deep-C) consortium, and to the Florida Institutes of Oceanography (FIO). The GoMRI is a 10-year independent research program established to study the effect, and the potential associated impact, of hydrocarbon releases on the environment and public health, as well as to develop improved spill mitigation, oil detection, characterization and remediation technologies. An independent and academic 20-member Research Board makes the funding and research direction decisions to ensure the intellectual quality, effectiveness and academic independence of the GoMRI research. All research data, findings and publications will be made publicly available. The program was established through a $500 million financial commitment from BP.  For more information, visit https://gulfresearchinitiative.org/.