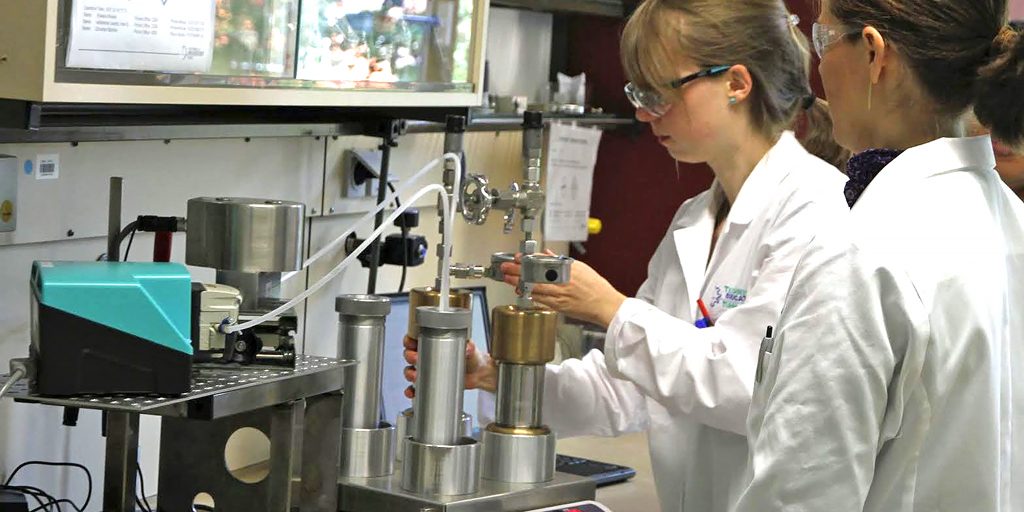 They found that pressures lower than had previously been reported in literature impacted bacterial growth and degradation abilities. The growth of one bacterial strain decreased and then stopped at pressures lower than those at the spill site, however this bacteria continued to degrade naphthalene, a polycyclic aromatic hydrocarbon compound. The team published their study in the October 15, 2014 issue of AMB Express: Effect of high pressure on hydrocarbon-degrading bacteria.

The 2010 Gulf oil spill occurred at 1,500 meters depth and at 150 bar pressure. Researchers observed deep-water bacterial blooms in the months after the spill, indicating that the released hydrocarbons enriched indigenous microorganisms. Field studies have shown that at ambient pressure, bacteria grew and biodegraded during and after the oil spill and that temperature and salt affected oil-consuming bacteria. In this paper, the scientists used high-pressure reactors to conduct experiments with selected bacteria to improve understanding about deep-sea oil biodegradation. They examined two bacterial strains common to the area and measured bacterial growth and hydrocarbon concentrations.

The growth of bacterium Rhodococcus qingshengii TUHH-12 was only slightly inhibited at 150 bar pressure, suggesting that it can be classified as a high-pressure tolerant organism or piezotolerant. Researchers observed decreased growth of bacterium Sphingobium yanoikuyae B1 at about 90 bar, and growth stopped at pressures above 120 bar. Nevertheless, S.yanoikuyae continued to convert naphthalene at pressures above 120 bar, although at a slower rate than at ambient or sea-level atmospheric pressure, suggesting that high pressures inhibited not the conversion of naphthalene but other central metabolic functions. This finding suggests a new type of previously unknown pressure sensitivity for bacteria.

One of the study’s authors, Rudolf Müller said, “This study was a proof of principle, demonstrating that some biodegrading bacteria are sensitive to high pressures as they occur in the deep sea. High pressure has to be taken into account in biodegradation estimations under these conditions.” When the researchers included their data obtained under high pressure in Deepwater Horizon oil fate prediction models, the predictions were closer to observed changes than when ambient pressure data were used. The high-pressure data may help future modelers better predict how long deeply submerged oil will remain in the environment.

Müller also noted that ongoing research is continuing to expand our understanding about biodegradation in deep-water conditions, “We have started high-pressure experiments with deep-sea sediments in oil presence and are seeing completely different bacterial populations developing as compared to bacterial incubations at ambient pressure. So this all fits together nicely, proving that pressure is important to understand deep-sea biodegradation.”

This research was made possible in part by a grant from BP/The Gulf of Mexico Research Initiative (GoMRI) to the Center for Integrated Modeling and Analysis of Gulf Ecosystems (C-IMAGE).