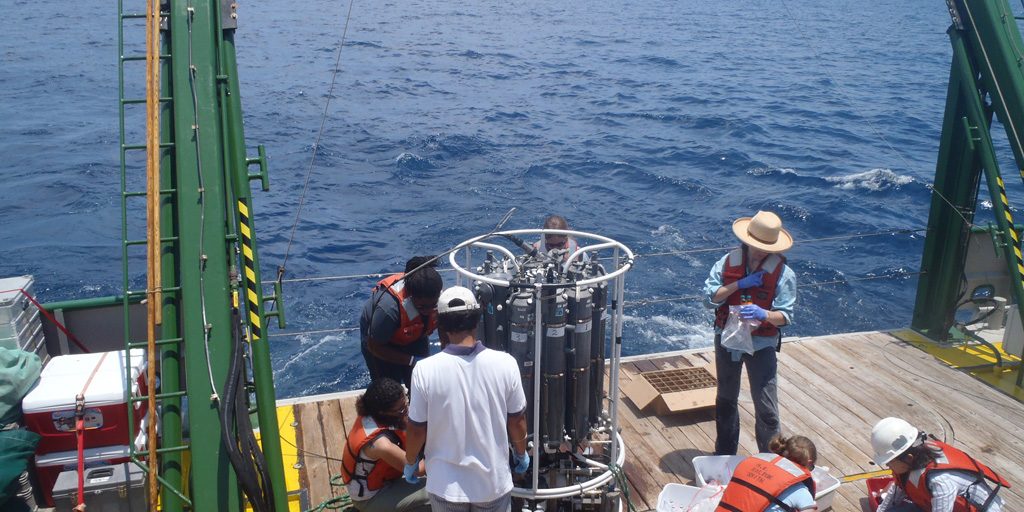 From March-December 2010 during ten research cruises covering over 105,000 square kilometers, scientists documented the fate and dynamics of Deepwater Horizon methane emissions around the blowout site.

They found that methane concentrations in deepwater plumes peaked in May and early June coincident with a rapid rise in the abundance of methane-oxidizing microbes and in their activity, but then oxidation activity dropped sharply in late June.

Methane levels continued to slowly decline, but remained above pre-spill levels through December. Molecular biological analyses identified a bloom of a highly-active population of methane-eating microbes that responded to methane inputs. The increase of these particular microbes in May-June, compared to pre-spill conditions, were consistent with the methane’s fast removal during that period. However, as methane levels decreased so did the abundance of this specific group of microbes, which may have contributed to the slower methane consumption rates documented thereafter.

Researchers published their findings in the May 2014 edition of Nature Geoscience Letters: The rise and fall of methanotrophy following a deepwater oil-well blowout.

The researchers analyzed 1,128 water column samples collected from the surface to 2,000 meters depth for methane concentrations and oxidation rates, and they measured inorganic nutrients and dissolved iron and copper concentrations that can affect microbial activity. The team used existing clone libraries of gene sequences to measure the presence and amount of the gene pmoA, which plays a role in bacterial methane oxidation.

Eleven days post-discharge, methane oxidation rose continually through early June at a rate that, if sustained, had the potential to eliminate in two months nearly all of the estimated released methane, exceeding previously anticipated turnover times by four orders of magnitude. Simultaneously, methanotrophs – the microbial population with the pmoA gene that obtain their energy by consuming methane – increased and peaked coincident with oxidation rates. Clone library analysis found that this surge of methanotrophs was highlighted by a 200-fold increase of a rare form of the pmoA gene that rapidly oxidizes methane. In late June, oxidation rates at the highest documented levels in the global pelagic ocean before the blowout dropped dramatically and then slowly decreased throughout the year. Researchers saw these decreases as an indication that physiological or environmental factors, mortality (viral infection, predator grazing), and nutrient and trace metal limitations, might have contributed to the decline as well. While nitrogen and phosphorus remained at levels high enough to facilitate oxidation, dissolved iron and copper, which are both vital for building microbial biomass, dropped to very low levels.

The team concluded that methanotrophs’ rapid response to the oil spill revealed unexpected competence in the microbial community to respond to a sudden increase in methane. However, its sudden crash following the initial oxidation surge was even more unexpected and emphasizes the complex interactions between physics, geochemistry, and microbiology that influence microbial responses to large-scale disasters.

This research was made possible in part by a grant from BP/The Gulf of Mexico Research Initiative (GoMRI) to the Deepsea to Coast Connectivity in the Eastern Gulf of Mexico (DEEP-C), Ecosystem Impacts of Oil and Gas Inputs to the Gulf (ECOGIG), and the Northern Gulf Institute (NGI). Other funding sources included the National Oceanic and Atmospheric Administration (NOAA Award NA07AR4300464), the Department of Energy (Gulf of Mexico Gas Hydrate Research Consortium, 07-11-036), and the National Science Foundation (OCE-1043225, OCE-0926699, and OCE-1042934).