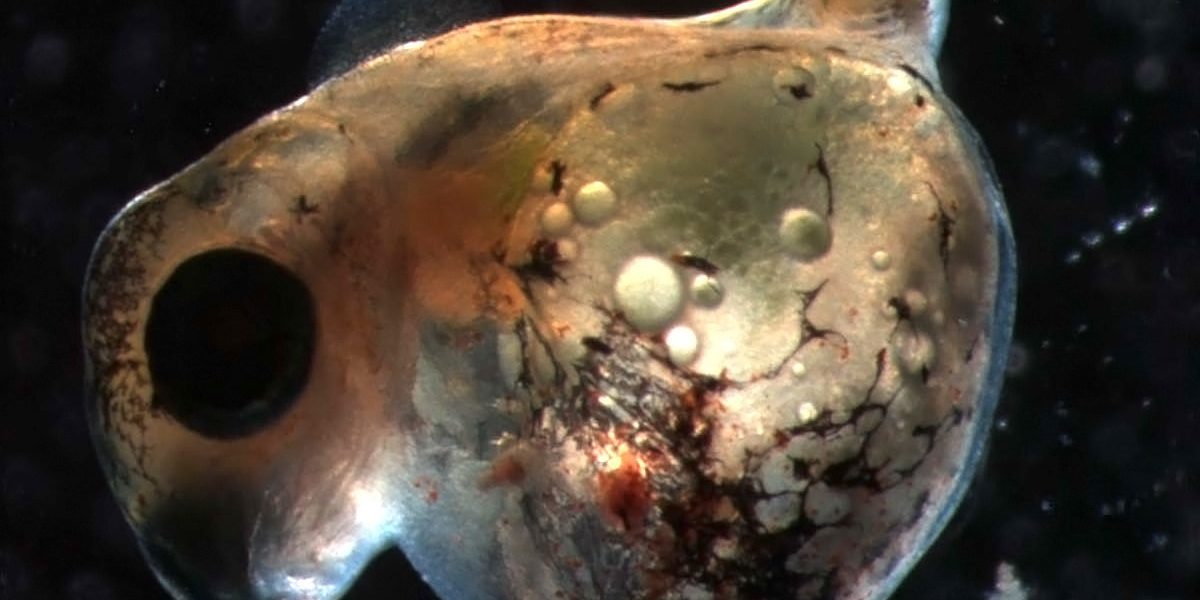 (Click to enlarge) Gulf killifish usually hatch within 10-14 days in the lab; however, embryos exposed to sediments from heavily oiled sites showed delayed hatching or failed to hatch within 21 days. This representative image of an un-hatched Gulf killifish embryo at 21 days post-fertilization appears underdeveloped, having characteristic features of PAH exposure such as cardiac edema. (Image provided by Benjamin Dubansky)

These results were published in an article titled, Multi-tissue molecular, genomic, and developmental effects of the Deepwater Horizon oil spill on resident Gulf killifish (Fundulus grandis) in the April 2013 edition of Environmental Science & Technology.

The team measured a contaminant-specific protein, CYP1A, in killifish and found highly elevated levels in gill, liver, intestine, and kidney of field-collected adults and in larval fish exposed to sediments from oiled sites. They purposely tested these tissues for “insights into the route of exposure based on the differential expression between organs and their functional roles.” Elevated CYP1A protein in the gill can indicate exposure to oil-derived PAHs via water, the intestine can indicate exposure through diet, and the kidney and liver suggests systemic circulation of PAHs. Results showed that “killifish were exposed to the toxic components of oil, and that the gill was a sensitive target of such exposure.” In comparing gene responses between gill and liver tissue, there was a “more dramatic response in the gill” which “may be reflective of this organ’s direct contact with the contaminated external environment.”

(Click to enlarge) Dr. Dubansky collects sediment core samples along the marsh’s edge at an oil-impacted site in Barataria Bay, Louisiana. In lab analyses, researchers exposed Gulf killifish embryos to these sediments to assess the reproductive potential of this abundant baitfish. (Photo by Shujun Zhang)

Many of these embryos did not hatch and those that did “were significantly smaller,” had “pronounced bradycardia” (slow heart rate), and exhibited “poor vigor at hatch.”

Researchers concluded that evidence of exposure to PAHs in adult fish was “coincident with the arrival of contaminating oil” and that embryos exposed to contaminated sediment resulted in “developmental abnormalities.” They also concluded that “biological responses appear to be more sensitive indicators of contamination.” In their discussions, the team suggests that “these data are predictive of population-level impacts in fish exposed to sediments from oiled locations along the Gulf of Mexico coast,” and that these analyses “will provide for measures of acclimation or potential recovery in oil-exposed fish populations.”

This research was made possible in part by grants from BP/The Gulf of Mexico Research Initiative (GoMRI) through Louisiana State University. Other funding sources included the National Science Foundation (DEB-1048206 and DEB-1120512 to A.W.) and the National Institutes of Health (R15-ES016905−01 to C.D.R.).