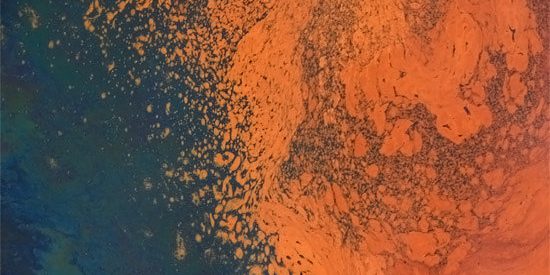 Scientists who tracked deep underwater oil and gas plumes after the Deepwater Horizon incident concluded that the respiration of dissolved and trapped hydrocarbons resulted in reduced dissolved oxygen concentrations from a bloom of hydrocarbon-eating bacteria.

These naturally occurring microbes then consumed an estimated 200,000 tons of hydrocarbons, and the study suggests that the use of dispersants at the wellhead increased the speed of this process. The researchers published their findings in the August 2012 edition of Environmental Science and Technology:  Assessment of the spatial and temporal variability of bulk hydrocarbon respiration following the Deepwater Horizon oil spill.

Working from May to September 2010, researchers measured over 1300 dissolved oxygen profiles. They tracked this deep water hydrocarbon feast in all directions around the wellhead, an area of almost 30,000 square miles. The team analyzed the data to determine the quantity of oil and gas that bacteria consumed and to characterize how this consumption changed with time.  Analyses showed that the decrease in dissolved oxygen and increase in microbes followed the movement of the oil plumes generally toward the southwest from the spill site.  After estimating the amount of hydrocarbons released into the Gulf and the amount consumed by bacteria, the researchers provided the first estimated measurements of how the rate of respiration changed during the period of 5 months following the incident. From these calculations, the team found “that the addition of dispersants to the wellhead eﬀectively accelerated hydrocarbon respiration.”

In their discussions, the researchers suggest that tracking and analyzing dissolved oxygen in the plumes is “an easy and effective approach” to estimate hydrocarbon release and respiration rates, and ultimately use that information to quantify the amount of oil consumed by bacteria after a spill. The authors further suggest that for future events, an effort “to sample an organized network, similar to the NOAA ‘clean sweep’ grid” would be an effective way to quantify hydrocarbon release and thus provide the necessary information to estimate environmental impact and inform recovery decisions.

View a video interview with co-author Kessler.  Read the announcement from the University of Rochester.

Other funding sources included the National Science Foundation through grants OCE 1042650 and OCE 0849246, the National Oceanic and Atmospheric Administration through a contract with Consolidated Safety Services, Inc., and a Sloan Research Fellowship to J. Kessler. This research was also supported by the China Scholarship Council through a scholarship program to M. Du. DO profiles were also supplied by R. Camilli which were collected with support from NSF grants OCE-1045025 to R. Camilli, OCE-1043976 to C. M. Reddy, and OCE-1045670 to B. A. S. Van Mooy.