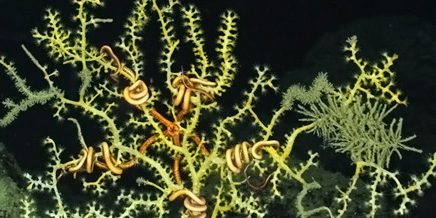 (Click to enlarge) Impacted corals from Mississippi Canyons 294 and 297. (A) Colony of Paramuricea biscaya at MC 294 as it appeared in November 2010, three months after the well was capped. (B) The same coral in November 2011. (C and D) Colonies of P. biscaya at MC 297 in November 2011. Note the extended polyps and apparently healthy yellow tissue on most branches and the patchy brown hydroid growth on other portions of the colonies. (Imagery from Figure 4 of the Fisher, et al. study, PNAS August 12 2014 vol. 111 no. 32)

They documented corals with a distinctive visible pathology indicative of recent damage from water borne toxins on coral located twice as far from and in 50% deeper waters than the impacted coral they initially found near the wellhead. The location of these recently-found damaged corals considerably expands the known area of oil impact to these types of communities. Researchers published their findings in the August 2014 issue of Proceedings of the National Academy of Sciences (PNAS): Footprint of Deepwater Horizon blowout impact to deep-water coral communities.

Oil fate estimations suggest that a significant amount of dispersed oil and gas remained in deep waters, allowing potentially toxic compounds to have an extended effect. In late 2010 after the well was capped, researchers found oil-damaged corals 13 kilometers southwest of the wellhead at 1,370 meters depth (Mississippi Canyon 294 or MC 294). Forensics fingerprinted the hydrocarbons as being associated with the Macondo well. This study’s team continued monitoring the MC 294 site with high-resolution imagery and examined other coral communities in the vicinity.

The brown flocculent material that was present on still-living coral when researchers discovered the MC 294 site in November 2010 was completely gone by November 2011. However, a distinctive patchy covering of hydroids had settled on portions of dead coral skeleton. The visible effects were patchy, not only across the site but also on individual coral colonies, suggesting an uneven spread of pollutant via tiny drops or particles.

Coral colonies found between 400 – 850 meter depth and those more than 30 kilometers from the wellhead did not show signs of impact; however, two sites at deeper depths and closer to the wellhead exhibited the impact characteristics seen at MC 294. One coral community, located six kilometers south-southeast of the wellhead at 1,560 meters depth (MC 297), showed impact to over 90% of the corals present. The other site, located 22 kilometers east of the wellhead at 1850 – 1950 meters depth (MC 344), showed less severe but widespread impact. The visual appearance indicates that the impacts occurred in the same time frame and manner across all three sites. This finding aligns with recent oil-plume models that suggest a dynamic swirling flow from the wellhead transported hydrocarbons to these eastward areas, although damage from sinking surface oil cannot be precluded as a possible cause for the damage observed.

The team created a timeline for the visual recognition of impact that show what damaged coral would look like at different times post-oiling. Additionally, they found other coral communities fouled by fishing line, indicating that these centuries-old and slow-growing marine animals face more threats than oil alone. This study can help scientists better understand the impacts on these environments and can inform future efforts for mitigation.

The study’s lead author, biologist Charles Fisher with Pennsylvania State University, said this study demonstrates “how valuable corals can be in detecting anthropogenic impact in the deep sea.” He explains that coral make excellent sentinels for long-term health monitoring of the deep ocean “because they are attached, normally live for centuries, and even if harmed their skeleton persists for many years.” Locating coral communities and analyzing imagery is a laborious process. Fisher noted that their research “would not have been possible without the active collaboration of engineers, geologists, oceanographers, and biologists, from government, industry, and academia as well as help from a small army of undergraduate students.”

This research was made possible in part by a grant from the Gulf of Mexico Research Initiative (GoMRI) to the Ecosystem Impacts of Oil and Gas Inputs to the Gulf (ECOGIG) consortium. Other funding sources included the Assessment and Restoration Division of the National Oceanic and Atmospheric Administration (NOAA).