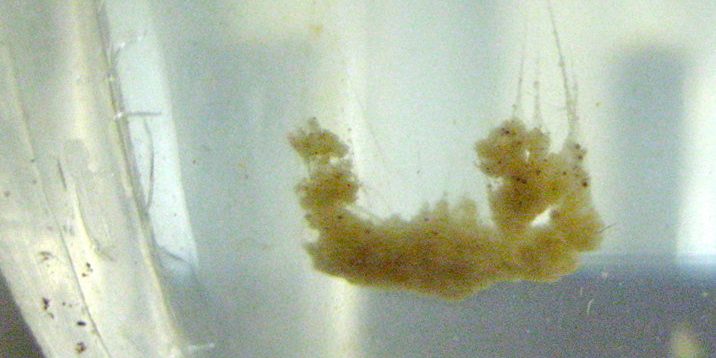 (Click to enlarge) One- to 2-inch long mucus aggregate formed experimentally to mimic conditions that led to the formation of similar large oily flocks after the spill. Such aggregates are very efficient in transporting material, including oil, down to the seafloor. Researchers are conducting studies to better understand when and how they form. (Photo credit: Julia Sweet, University of California Santa Barbara)

Scientists studying oil-contaminated surface waters near the well-head site immediately after the Deepwater Horizon incident published their findings in the July 2012 edition of Environmental Research Letters:  Marine snow formation in the aftermath of the Deepwater Horizon oil spill in the Gulf of Mexico.

Oil droplets created larger than normal amounts of buoyant, mucus-rich marine snow and this change likely played a key role in the fate of the surface oil, transporting oily aggregates to the seafloor and possibly providing a means for fossil carbons to enter the food web.

Marine snow is a commonly observed phenomenon caused by small particles of organic sediment, including microscopic organisms, fecal matter, algal blooms, and other disintegrated material that collect at the surface and slowly drift to the sea floor.

Researchers used observations and laboratory experiments to determine that the marine snow which formed immediately after the oil spill differed in both size and consistency from what is typically seen because of the interaction of three mechanisms. First, the oil floating at the surface of the water attracted microbial oil-degraders, forming sticky web-like “floating biofilms.” These “mucus–oil webs collapsed upon themselves similar to old spider webs” and formed mucus-rich marine snow. Second, large, fluffy particles called “flocs” formed as oil molecules were attracted to other matter suspended in the water and aggregated as they collided and stuck together. Finally, oil droplets merged within masses of cyanobacteria (commonly known as blue-green algae which are regular contributors to marine snow) and quickly changed the green color and fluffy appearance of typical marine snow to a white, more thin and stringy substance.

The inclusion of oil droplets in the marine snow also appeared to increase its overall buoyancy, causing the snow to stay on the surface longer and take more time falling to the seafloor. Researchers hypothesize that this slow-moving, glutinous, oil-contaminated marine snow in both surface and sub-surface waters might serve as “a possible pathway that determines the distribution and cycling of oil within the ecosystem,” potentially becoming a food source for zooplankton, fish, and benthic organisms in the sediment as it made its way through the water column and down to the seafloor.

This research was made possible in part by a Grant from BP/The Gulf of Mexico Research Initiative (GoMRI) through the Ecosystem Impacts of Oil and Gas Inputs to the Gulf (ECOGIG) Consortium. Other funding sources included the National Science Foundation RAPID (OCE-1045330) to UP, VA and AD. Funding for KZ came from an NSF RAPID (OCE-1045115) awarded to Andreas Teske (UNC).