Tracking the Last Mile Before Oil Meets the Beach

Rolling waves, swirling currents, converging fronts, shifting sediments – all are connected as anyone who has chased a ball in beach waters knows. But how?

“We’re studying the region most hit by the Deepwater Horizon oil spill, which includes the coasts surrounding the Gulf,” explained Tamay Özgökmen, the team’s principal investigator, “to learn more about how things in the water get outside of the surf zone and onto the beaches.”

Scientists are tracking elusive ocean processes to visualize the movement of Gulf waters in 3D. For this experiment, they deployed 250 GPS-equipped drifters (30 were biodegradable) to track surface waters, using a “release and catch” method for repeated use of these specially-outfitted devices. Researchers injected an EPA-approved dye both along and outside the surf zone to trace its movement through the water column.  Various in-situ instruments recorded water and atmospheric conditions.

“This study will collect important data necessary to understand the currents in the near-shore marine environment,” said Ad Reniers, co-lead scientist for SCOPE. “The information collected will be used to develop computer models of the coastal zone, to improve our scientific understanding of this region in the event of future oil spills, and to better understand how larvae or pollutants travel close to shore.”

These researchers are members of the Consortium for Advanced Research on Transport of Hydrocarbon in the Environment (CARTHE), a science team funded by the Gulf of Mexico Research Initiative (GoMRI). The University of Miami’s Rosenstiel School of Marine and Atmospheric Science (UM-RSMAS) administers CARTHE under Özgökmen’s direction. Joining Reiners as co-lead scientist for SCOPE is Jamie MacMahan with the Naval Postgraduate School.

“Computer models will be able to give us better estimates of where the oil spill will go and how fast and in which patterns it will spread,” said Özgökmen. “This can help emergency responders to better direct their limited resources and help us understand ecological damage that may have occurred.” He is confident that “a lot of beneficial information will come out of this study, not just about the oil spill.”

For example, the spreading pattern of dye revealed dangerous rip currents. “That’s the best visual image of a rip tide I’ve ever seen,” said Chuck Wilson, GoMRI Chief Scientist. “If people could see that, they might understand a little better how they work.”

To construct data on the multiple factors that influence the behavior of ocean currents, the scientists have to collect data at one time. “We combine a lot of different instruments at once to capture the complete picture of all the drivers of surface currents,” explained SCOPE team member Guillaume Novelli, a UM-RSMAS postdoctoral fellow. “It took a village to pull off SCOPE successfully,” said Özgökmen referring to the many dedicated staff who coordinated logistics, people, equipment, and, of course, the science.

The first week of SCOPE was a flurry of preparations: teams finalized local permits, assembled drifters and identified specific locations for launching (freshwater inlets, surf zones, and along the inner shelf and fronts) and then staged them for deployment; others prepared dye injection equipment and assembled camera-equipped drones and kites; and divers positioned observing instruments in the water at various distances from the beach and depths in the water column.  The Florida International University team erected a meteorological data-gather tower on site.

The next week, the team ran test trials of the experiments to make final adjustments for local conditions, aerial observations and imagery, and to inform their remote modeling teams. Scientists also hosted on-site interactive demonstrations with local middle and high school students.

In the final week, everyone, in a synchronized manner, executed their tasks of well-informed, targeted releases of dye and deployment of drifters with the coordinated use of Synthetic-aperture radar (SAR) images, microstructure and air-sea interaction measurements, observations of frontal features, and detailed modeling adjusted to observations.

Once models are supplemented by real-time data from experiments, climate scientists can combine these data with wind and tides and use them to predict oil transport in scenarios under a variety of conditions. In the long-term, improved transport predictions can inform environmental policy and support the development of crisis response plans.  The U.S. Coast Guard can use improved transport predictions to pinpoint vessels in distress and with search and rescue operations, and fisheries can better understand larval movement of important commercial species.

SCOPE is the second large CARTHE experiment that brings together a wide range of scientific experts to experiment with measurement methods and study oil transport. CARTHE conducted their first experiment, GLAD (Grand LAgrangian Deployment), near the Deepwater Horizon site in the summer of 2012. Scientists will use data from both experiments to more accurately model the transport and fate of oil in the Gulf.

Novelli eloquently explained the importance of understanding ocean processes in both deep and near-shore waters: “What happens in the last 100 meters of coastal transport is determined by what happened in the first 100 meters of the spill.”

Read about last year’s GLAD experiment:  CARTHE at Sea: A Grand Experiment for Transformative Research in Gulf Oil Studies and Follow the Journey of CARTHE Drifters in the Gulf and Five Million Data Points and Counting and Drifters in Path of Hurricane Isaac Provide New Insights on Ocean Currents.

The CARTHE program includes 26 principal investigators from 12 research institutions in eight states. Together these scientists are engaged in novel research through the development of a suite of integrated models and state-of-the-art computations that bridge the scale gap between existing models and natural processes. For more information about CARTHE, please visit www.carthe.org. 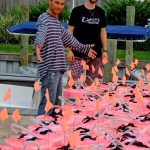 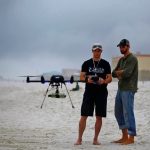 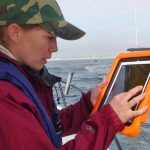 This research was made possible in part by a grant from BP/The Gulf of Mexico Research Initiative (GoMRI) to the Consortium for Advanced Research on Transport of Hydrocarbon in the Environment (CARTHE). The GoMRI is a 10-year independent research program established to study the effect, and the potential associated impact, of hydrocarbon releases on the environment and public health, as well as to develop improved spill mitigation, oil detection, characterization and remediation technologies.  An independent and academic 20-member Research Board makes the funding and research direction decisions to ensure the intellectual quality, effectiveness and academic independence of the GoMRI research.  All research data, findings and publications will be made publicly available.  The program was established through a $500 million financial commitment from BP.  For more information, visit https://gulfresearchinitiative.org/.