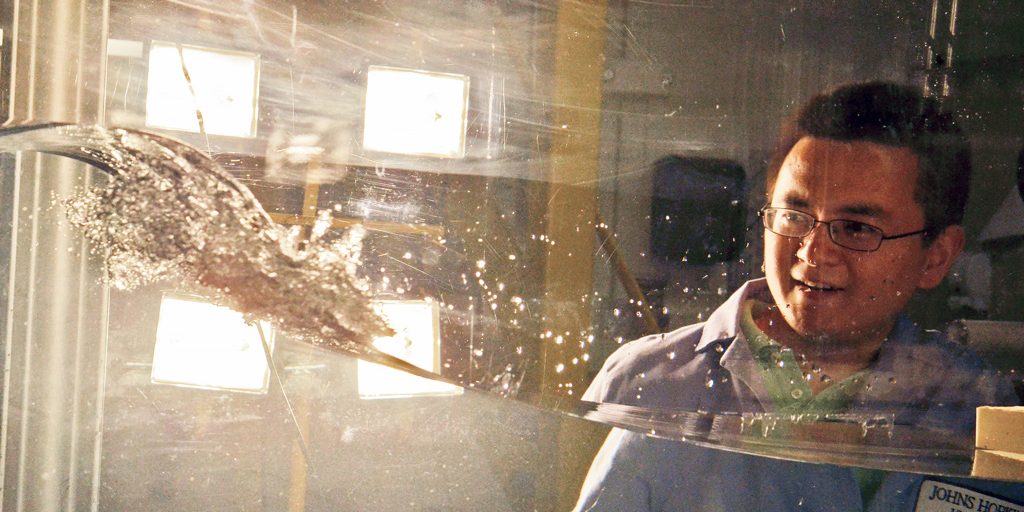 (Click to enlarge) In an acrylic wave tank he designed and built himself at the Johns Hopkins Laboratory for Experimental Fluid Mechanics, Cheng observes a mechanically generated breaking wave and its associated turbulent flows. (Photo credit: Trevor Holmgren)

For Cheng Li, the beauty of our oceans is precious.

He wants to protect that beauty by improving the tracking of and response to oil spills. Using a customized, self-built wave tank, he investigates the interactions between oil, dispersant, and breaking waves. Data from his wave experiments will contribute to better predictions about where and how dispersed oil travels.

Cheng is an engineering Ph.D. student at Johns Hopkins University and a GoMRI Scholar with DROPPS. He explains why he is so invested in oil spill research and the lessons he has learned along the way.

Cheng has always envisioned a career in science and engineering. However, he did not consider environmental fluid mechanics until he started pursuing graduate school. When applying to Johns Hopkins University (JHU), he heard that Dr. Joseph Katz was an expert in this field, conducting research for many years on the mixing of water with diesel fuel and the effects of turbulence on the breakup and transport of oil. He also learned that Dr. Katz’s research had made notable progress to understand the formation and dynamics of micron-size oil drops in water. Though still an undergraduate at the time, learning about this research sparked Cheng’s interest in fluid mechanics.

As a new JHU graduate student, Cheng began his research studying bottom boundary layer flows off the New Jersey coast. While on board a research vessel, he had an experience that turned his interest in understanding the fluid mechanics of oil and water into a passion. Seasickness sidelined Cheng for several days, but when he recovered and went up on deck for some much-needed fresh air, what he saw stunned him. “The beauty of the sea struck me,” he says. “The astounding power of the waves and the amazing beauty of ocean life helped me realize the vital importance of protecting our oceans.” The recent Deepwater Horizon oil blowout in the Gulf gave that beautiful image additional meaning, and the necessity of oil spill research and recovery became more personal. When Dr. Katz, who was now Cheng’s graduate advisor, became a co-Principal Investigator for the DROPPS oil spill research project, Cheng was happy to be part of his team.

(Click to enlarge) Cheng aligns a laser at the Johns Hopkins Laboratory for Experimental Fluid Mechanics to form a uniform and collimated laser beam while conducting an in-line holography experiment. (Photo provided by Cheng Li)

Cheng’s research investigates how breaking waves dispel oil slicks with and without chemical dispersant. Sea surface oil slicks can contain harmful toxins and threaten coastlines. Breaking up surface oil into tiny droplets can reduce these hazards, as oil droplets submerge below the surface, keeping slicks away from shore and helping biodegradation. Chemical dispersants amplify this process by weakening the bonds that hold larger droplets together, and breaking ocean waves then separates the oil into smaller droplets and distributes them into the water column. Cheng’s research aims to better understand the physical mechanisms and effects of these processes.

Cheng designed and built a custom wave tank for his experiments that simulates the interactions of waves, oil, and dispersed oil. Made from transparent acrylic for full optical access, the tank measures 20 feet long, 2 feet high, and 1 foot wide and has a piston-type wave plate that can simulate any type of ocean wave, from rolling ripples to powerful plunging breakers. Cheng captures breaking wave actions using a high-speed camera and pushes the camera’s spatial resolution to the limit to observe the formation of small oil droplets. He then generates data based on the waves’ behavior at different time intervals and analyzes the entire process. This data will ultimately describe oil droplet size distribution with and without dispersant.

Cheng’s wave-tank experiments focus on the ocean’s uppermost layer, but he also participated in the DROPPS mesocosm experiment, which replicated the vertical marine environment using tall tanks filled with seawater and phytoplankton. Using lasers and high-speed imaging, researchers from various fields studied interactions of oil droplets rising from the ocean’s bottom with phytoplankton throughout the water column. They found that dispersant created an “octopus-like” body of oil with thin threads and tiny droplets trailing behind the oil, providing a larger surface for biodegrading microorganisms to attach.

While lab work can be challenging, Cheng knows that it will also be rewarding to watch his research enhance real-world oil spill models by forecasting oil paths and identifying the most effective dispersant application strategies. He and his colleagues are slowly uncovering new information about how droplets are physically generated and transported and how dispersant influences droplet size. “Our research intends to minimize the potential damage of future deep-water oil spill disasters,” says Cheng.

Cheng explains that DROPPS research is progressive and exciting because it is “amazingly interdisciplinary, combining the valuable experience of expert biologists, chemists, and engineers.” By interacting with other scientists, Cheng constantly learns from and about other scientific fields, which he believes is crucially important to understanding the whole picture. He noted the mesocosm experiment as an example of exciting progress that can result from scientific collaboration. “All of those findings were made possible through interdisciplinary research,” he reflects. “The experiment showed me that interdisciplinary teams can gather far more insight than individual experts alone. It was incredibly rewarding to be a part of it.”

Being on the DROPPS research team is making Cheng’s dream of protecting our seas and oceans a reality. “Since the Deepwater Horizon oil spill, we have learned so much about how oil spreads and how we can safely contain and disperse it,” said Cheng. “I am so pleased that our research will help us more effectively prepare for and deal with oil spills.”

Cheng is entering the fifth year of his graduate studies and his third year of GoMRI research. In the next couple of years, Cheng will complete his Ph.D. research and pursue either a job in the petroleum industry or a post-doctoral position. Regardless, he is sure of one thing: he wants a career in engineering and environmental fluid mechanics that will build on his research with GoMRI and Johns Hopkins.

Dr. Joseph Katz, a mechanical engineering professor and the Director of the Johns Hopkins University Center for Environmental and Applied Fluid Mechanics, describes Cheng as a “bright, hard-working, and determined student.” Katz reports that Cheng’s research extends beyond a typical Ph.D. thesis and that his elaborate wave tank project exemplifies his “incredible ability to absorb substantial amounts of information from diverse fields and integrate it to produce something new and innovative.”

Katz explains that, as an advisor, delegating tasks and giving advice is easy. However, carrying out those tasks can often be very difficult. Cheng’s ability to handle the high-demand project made him a key element of their oil spill research. “He functioned very well under pressure. When I interact with him, there are two heads involved, not one. It’s not a dictation, it’s an interaction,” says Katz. “I believe this is the beginning of a very successful career as a researcher and scientist.”

The GoMRI community embraces bright and dedicated students like Cheng Li and their important contributions. The GoMRI Scholars Program recognizes graduate students whose work focuses on GoMRI-funded projects and builds community for the next generation of ocean science professionals.

Visit the DROPPS website to learn more about their work.

This research was made possible in part by a grant from BP/The Gulf of Mexico Research Initiative (GoMRI) to the Dispersion Research on Oil: Physics and Plankton Studies (DROPPS). The GoMRI is a 10-year independent research program established to study the effect, and the potential associated impact, of hydrocarbon releases on the environment and public health, as well as to develop improved spill mitigation, oil detection, characterization and remediation technologies. An independent and academic 20-member Research Board makes the funding and research direction decisions to ensure the intellectual quality, effectiveness and academic independence of the GoMRI research. All research data, findings and publications will be made publicly available. The program was established through a $500 million financial commitment from BP. For more information, visit https://gulfresearchinitiative.org/.