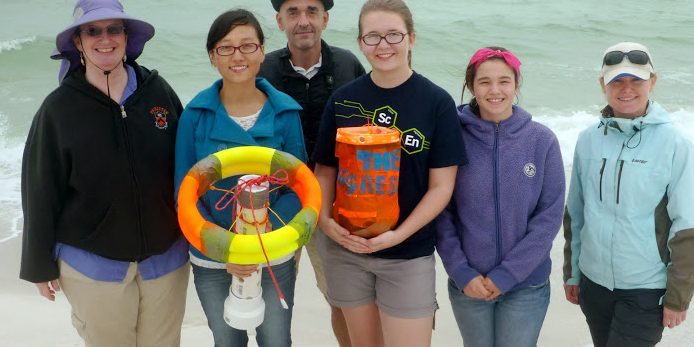 (Click to enlarge) The winning designs “Hannibal” and “The Aggressor” are field tested just prior to the experiment. Teacher Dana Fields (left) and her students from Rickards High School Environmental Systems class were able to accompany Dr. Nico Wienders (center) to the SCOPE deployment site at John Beasley Park in Okaloosa Island, FL. (Photo provided by Deep-C)

It was a tall order, but high school students rose to the challenge: they integrated physics, engineering, and scientific curiosity and created functional data-gathering drifters. They also became part of a scientific effort to improve predictions of how oil moves through coastal waters and onto shores.

SCOPE is a project of the Consortium for Advanced Research on Transport of Hydrocarbon in the Environment, or CARTHE. Scientists and education specialists with CARTHE collaborated with colleagues from the Deep Sea to Coast Connectivity (Deep-C) research consortium and incorporated local schools as part of the project to extend the wins of this successful experiment beyond the scientific community.

Florida teachers and students from the Maritime and Science Technology Academy (MAST), the Maritime Magnet program at South Broward High School, and the International Baccalaureate program at Rickards High School in Tallahassee worked with scientists and education specialists to learn about drifters. Then the students designed, built, and tested their own devices.

(Click to enlarge) A student from Rickards High School tests the “Duck Dodger” for its ability to right itself – a criteria for success. (Photo provided by Deep-C)

The drifters had to be sturdy, biodegradable, colorful, and inexpensive. While holding a GPS unit, they had to float upright in the water. They had to be light enough for researchers to easily deploy them in large numbers, yet have enough weight to prevent wind blowing them away. Students had to factor in weather, currents, boats, and other contributors to water movement.  Though difficult, students were excited, enthusiastic, and inspired to succeed.

Melissa Fernandez, teacher of Engineering II and III at MAST, spoke about the allure of this learning opportunity with potential for long-term education impact:  “They [the students] realize this project has a purpose. They’re not just building something for themselves but for a much larger community. And that is incredibly motivating for a high school student.”

Tamay Özgökmen, Director of CARTHE and a professor of meteorology and physical oceanography at the University of Miami, believes that scientists can affect student learning by involving them in an active experiment: “The way to know more is through curiosity and scientific experimentation, and learning more about nature is a good way to appreciate it at various levels.”

(Click to enlarge) Students from MAST Academy make minor adjustments to their ocean drifter before deploying it in the waters of Biscayne Bay. (Photo provided by CARTHE)

Integrating disciplines and coming up with a workable product requires a valuable, yet hard to develop, skill set. Özgökmen explains, “They have to actively read and learn and think for this; very different than one-way information flow from TV, internet, or some traditional classroom activities.” Students had to combine creative energies with engineering efforts, developing and testing multiple approaches to meet drifter criteria. Students also had access to a real-time data management system, allowing them to see drifters in action and think about how ocean current flows and which designs work better than others.

Researchers aspired to encourage students to become active contributors to science.  “In this information era, many kids assume that everything is known about the planet and they can just google it, while in fact, we have a very limited understanding of the ocean,” Özgökmen said. “Participation in a real ocean experiment gives them a can-do attitude.”

(Clilck to enlarge) MAST Academy students field test their devices to see if they are buoyant and can stand up to breaking waves in Biscayne Bay. (Photo provided by CARTHE)

Nico Wienders, a physical oceanographer at Florida State University and member of the Deep-C Consortium and CARTHE, worked with the class at Rickards High School. He believes that scientists connecting directly with students, sharing their knowledge and practical, first-hand experience, promotes a deeper level of understanding about the oceans, drifters, buoyancy, and instrument design: “The students not only had to understand new ideas and a new theoretical framework, but they also had to put it immediately into application by building their own drifters.”

CARTHE outreach manager Laura Bracken said that because students designed and built the drifters on their own “they were true inventors.”  She continues, “We provided them with information about why we build drifters the way we do, but then set them free to make better drifters. Their challenge was to come up with the next great design and they exceeded all our expectations.”

But students were not the only ones who benefited. “The collaboration with students was also beneficial in a purely scientific manner,” explained Wienders. “They came with unbiased, new and refreshing ideas for the drifter designs. After years of practice, we sometimes get blunted, influenced, and many of us use similar ideas for designs. The interaction with the students was very rejuvenating, as their creativity is still unbounded.”

Purposely incorporating teachers and students with an ongoing scientific project that fills pressing information needs is a win on many levels:  educators directly interact with experts and transfer current science and technology into their teaching; students excitingly engage in hands-on, novel, application-based ocean science; scientists gain new perspectives and increased motivation from student energy and enthusiasm; and society gains a better pool of next-generation-scientists to address future complex environmental and public dangers. And the succession of benefits keep coming.

(Click to enlarge) The team from MAST Academy at Biscayne Bay. (Photo provided by CARTHE)

Learn more about this project and future opportunities at www.carthe.org/.  Read the Deep-C Voices from the Field blog about Rickards Students Successful Drifter Deployment. See pictures of drifter testing by students from Maritime Magnet Program at South Broward High School and from MAST Academy.

This research was made possible in part by grants from BP/The Gulf of Mexico Research Initiative (GoMRI) to the Consortium for Advanced Research on Transport of Hydrocarbon in the Environment (CARTHE) and to the Deep sea to Coast Connectivity in the Eastern Gulf of Mexico (Deep-C) Consortium. The GoMRI is a 10-year independent research program established to study the effect, and the potential associated impact, of hydrocarbon releases on the environment and public health, as well as to develop improved spill mitigation, oil detection, characterization and remediation technologies.  An independent and academic 20-member Research Board makes the funding and research direction decisions to ensure the intellectual quality, effectiveness and academic independence of the GoMRI research.  All research data, findings and publications will be made publicly available.  The program was established through a $500 million financial commitment from BP.  For more information, visit https://gulfresearchinitiative.org/.