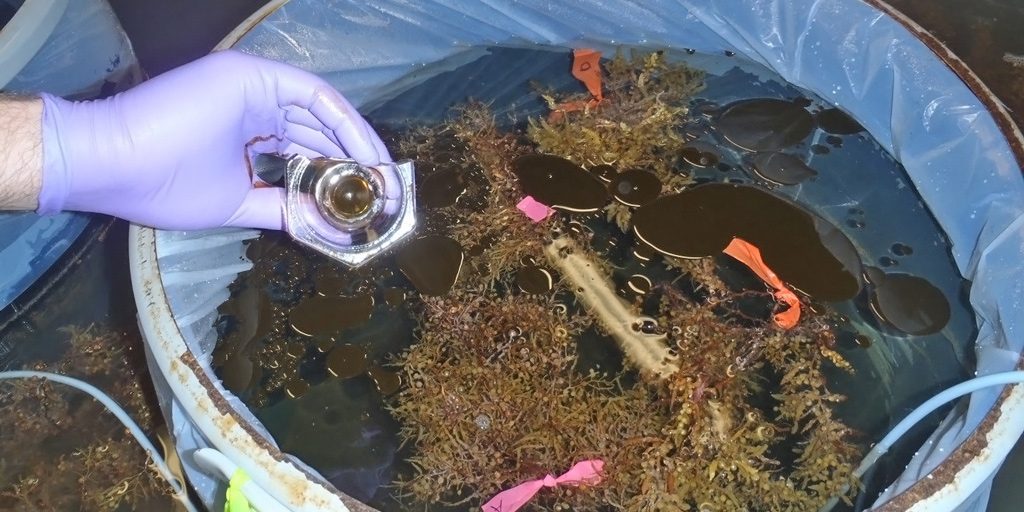 They observed disappearance during and after the Deepwater Horizon spill and then conducted mesocosm experiments with Louisiana sweet crude oil and Corexit 9500 dispersant to test the fate of oiled Sargassum. They found that oil accumulated on the seaweed, potentially exposing young fish to concentrated pollutants. The combination of oil and dispersant caused the seaweed to sink, thus removing the habitat. From the initial seaweed oiling to its sinking, reduced oxygen levels in the oiled treatments may have also stressed marine life. The researchers published their findings in the journal Public Library of Science (PLoS) One: Novel pathways for injury from offshore oil spills: Direct, sublethal and indirect effects of the Deepwater Horizon oil spill on pelagic Sargassum communities.

Sargassum communities, large floating seaweed mats, provide unique open-ocean oases that support a wide variety of marine animals at all life stages, including turtles, fish, and invertebrates. The Gulf of Mexico contains the world’s second most productive Sargassum system, which is the only naturally-occurring ocean habitat produced by living organisms. Marine ecologists were concerned about Gulf seaweed after the 2010 spill because similar algae communities in Prince William Sound experienced extensive and long-lasting damage following the Exxon Valdez spill.

This study’s team recorded the locations and abundance of floating mats during 19 aerial surveys from 2010 to 2013. There was compelling visual evidence of seaweed loss and then recovery across 3,100 square kilometers of water from the Florida panhandle to the Louisiana Chandeleur Islands. To complement aerial observations, the researchers collected Sargassum and tested the effects of oil and dispersants under static and oxygenated conditions in mesocosm tanks. Seaweed received separate treatments of oil, dispersant, and an oil-dispersant mix. The team monitored seaweed weight, vertical position in the water, and dissolved oxygen levels.

The trends for vertical position were similar under both experimental conditions. The dispersant and oil-dispersant mix affected vertical location the most, sinking all treated Sargassum within 24-48 hours. In contrast, seaweed in the oil-only and controlled-seawater treatments remained at the surface for most of the experiment. Another finding from the mesocosm trials was that dissolved oxygen levels rapidly decreased in dispersant and oil-dispersant treatments under static conditions, likely due to an increase in oil-eating microbes which consumed available oxygen. Hypoxia formed in 12 hours, and extremely low oxygen levels (anoxia) formed within 24-36 hours. Oxygen reduction followed a similar pattern under aerated conditions, but no hypoxic levels were reached.

The authors discussed how these results relate to ocean conditions. Large Sargassum mats form under weak wind conditions when less oxygen mixes with waters. Floating oiled mats may accentuate surface water hypoxia or anoxia, setting up an indirect impact on marine life. Before the floating oiled mats sink, they may move pollutants horizontally across surface waters and extend contamination. Most seaweed mats that sink do not return to the surface and no longer provide life-supporting habitats. The initial loss of surface habitats may become worse because Sargassum propagates through fragmentation and growth.

They also noted that this study contributes to future decision making by adding an evaluation component to response tradeoffs and benefits. For Sargassum, contact with dispersant may result in loss of this unique habitat and an increase in exposure and damage to marine life below surface waters.

This research was made possible in part by grants from the Gulf of Mexico Research Initiative (GoMRI) to the Alabama Marine Environmental Science Consortium, the University of Southern Mississippi, and the Northern Gulf Institute. Other funding included a National Science Foundation RAPID grant from the Division of Ocean Sciences.