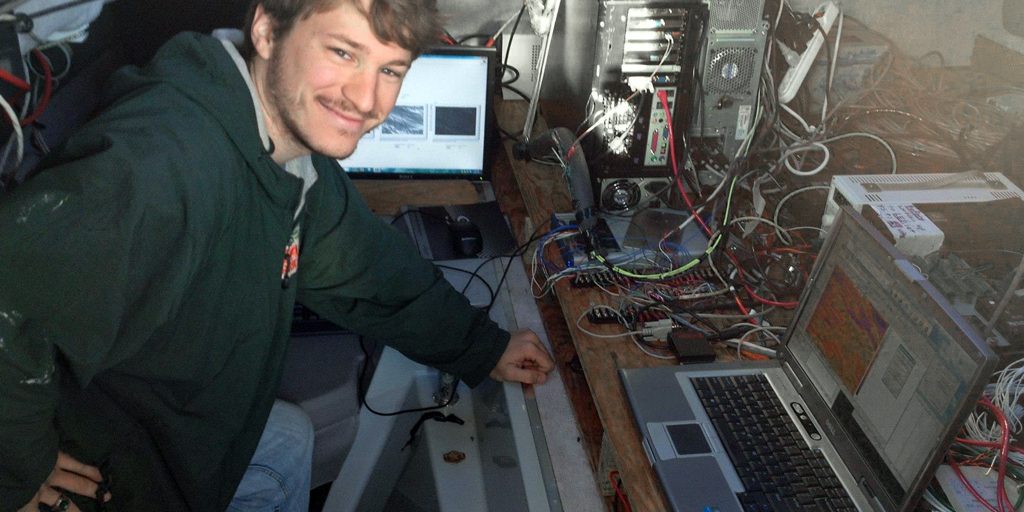 Nathan Laxague studies a small-scale subject matter that has potentially large-scale applications. Capillary waves – or ripples – on the ocean surface can indicate the presence of a film or oil slick on the water’s surface, making them “an important link in the chain of oil spill response.”

Nathan is a physics Ph.D. student at the University of Miami and a GoMRI Scholar with CARTHE. He describes how his involvement in collaborative interdisciplinary research has changed his perception of the scientific process and the way it is communicated.

Nathan has always loved both language and science, and his desire to “combine communication and science in a useful and empowering way” sparked his interest in research and teaching. His parents’ language arts backgrounds introduced him to eloquent communication, while his participation in Audubon camps near his seaside home of Scarborough, Maine, involved him in environmental sciences. When he entered college, Nathan chose a science major, feeling that would give him more professional fulfillment, and pursued language arts as a hobby. He completed a physics degree at the University of Miami and then set out to find his place in the scientific world.

(Click to enlarge) Nathan reviews salt-water tank images as producer Ali Habashi films footage for a CARTHE video detailing how field data and interconnected modeling can come together to improve our understanding of the surface currents that influence the fate of Gulf pollutants. (Photo credit: Tamay Özgökmen)

Nathan wanted something more tangible from his studies than laboratory work, so he focused on applied sciences graduate programs. After sending out emails exploring possibilities, Nathan was happy when the Division of Applied Marine Physics chairman Dr. Brian Haus requested a copy of his résumé. “If I had contacted Dr. Haus the year after or the year before, you’d be talking to someone else right now,” Nathan says, “It was definitely a case of right place, right time.” Dr. Haus had recently started a project with CARTHE investigating coastal surface currents to improve oil transport predictions, which Nathan thought was a perfect match for his physics background and fieldwork interest.

Nathan studies the interaction between the atmosphere and the ocean, specifically wind and waves. His focus is on using capillary waves, sometimes called ripples or cat’s paw ripples, to identify potential oil slicks. Satellites are very sensitive to the presence of short-scale surface waves. These waves’ absence leads to distinct dark regions in the satellite radar imagery, which can affect operational spill response. When these short-scale waves exhibit less energy than expected, then it is likely that something on the surface is preventing wave formation. Nathan explains how surface oil could do that, “If you blow on water in a greasy pan, it’s much tougher to get ripples than in a pan of clean water; the presence of oil knocks out these capillary waves.”

(Click to enlarge) Nathan programs the Aquadopp acoustic current sensor for data collection during a drifter test in Biscayne Bay. The drifters being evaluated included those used in the GLAD and SCOPE experiments and an experimental design to be used in future research. (Photo credit: Tamay Özgökmen)

Because wind can easily interfere with satellite measurements of short-scale waves, Nathan’s research aims to enhance the remote sensing of these waves. However, collecting in situ data on mere ripples is not easy. Traditional sensors, such as gauges and lasers, are useful for measuring larger waves but disturb the surface too much to efficiently measure capillaries. Instead, Nathan uses a small camera that is able to sense short-scale wave slopes without distorting their structure. Because the application was new, Nathan’s first responsibility was making it work, “Dr. Haus pointed to the camera and said, ‘read this paper and learn how to replicate their method with that camera.’” Nathan was successful, and now he and his colleagues conduct fieldwork without disturbing the water’s surface, a process he describes as “a unique blend of in situ and remote sensing.”

Nathan’s participation in CARTHE’s first major field experiment, the Grand Lagrangian Deployment (GLAD), helped him understand how his work fit into a much larger scientific endeavor. GLAD used hundreds of drifters to track ocean surface currents around the Deepwater Horizon site. Nathan initially felt that collection of wave data was merely a “barnacle on the hull” of this history-making experiment, but he came to understand that all parts of their observational fieldwork were important to CARTHE research, “I felt like I was part of something enormous.” Nathan made a unique contribution using his language-arts skills to create an engaging, real-time narrative for the GLAD blog.

Nathan played a key part in CARTHE’s second major field experiment, the Surfzone Coastal Oil Pathways Experiment (SCOPE), that used drifters, dye, and drones to track and measure forces that move waterborne objects or contaminants onshore. Nathan planned and executed his own experiment – including wiring the research vessel’s cabin, setting up the instruments, and programming the computer for data collection – which afforded him a great deal of responsibility and autonomy for a graduate student.

When bringing together experts from many different fields, one can expect some difficulty avoiding a “Tower of Babel” scenario. However, Nathan explains that CARTHE members “go with the flow – pun intended – and that turns into some wonderful research collaborations. For example, I’d sit down during breaks and, by just casually chatting with people about their research, I’d make more progress on my own work than I’d made in a month! I’ve had some of my greatest breakthroughs this way.”

Nathan has also made some keen observations about professor-student interactions. “To undergrads, professors act more like lawyers: they never ask a question they can’t answer. Once you become a graduate student, that changes. You’re both discovering the science together.” Nathan believes treating students as colleagues prepares them for future networking. “Engaging your students is the best way to get them to collaborate outside of your bubble,” he says. “Experienced scientists aren’t afraid to contact a professor they know across the country, but for a twenty-something it’s a big deal.”

Nathan also gained a new perspective on collaboration and scientists’ adaptability by observing the immediate multi-consortia response to the Hercules rig blowout. He and fellow grad student Conor Smith led CARTHE’s drifter deployment for the Hercules response. Initially, Nathan had associated research with months and even years of planning. However, seeing such rapid response changed that. “Fast response isn’t typical for a scientist,” explains Nathan. “We started planning on Tuesday afternoon and by Saturday morning we were out on the water collecting data. For a scientist, that’s pretty good!”

(Click to enlarge) Nathan stands next to the new Surge-Structure-Atmosphere Interaction (SUSTAIN) wind-wave tank at the Rosenstiel School of Marine and Atmospheric Science (RSMAS). The enclosed acrylic tank (measuring 2m x 6m x 18m) has twelve independent wave paddles and a fan capable of delivering Category 5-equivalent wind speeds, making it the most complete wind-wave tank in the world. While the tank is still undergoing minor construction, Nathan says that it will play a key role in his future research. (Photo credit: Tamay Özgökmen)

Nathan is about half-way through his graduate work and wants to remain in academia either as a professor, his preference, or as a post-doc researcher. He would like to work in areas that combine disciplines, such as applied physics studying marine environments, and to “teach those who want to learn.”

Dr. Haus describes Nathan as “an innovative and productive researcher.” Looking back on Nathan’s time with CARTHE, he says that watching Nathan collaborate and make connections with his fellow students has been an exciting experience. He also reflected on Nathan’s enthusiasm and creativity, saying, “I am often surprised by his ability to rapidly implement my suggestions and to take a small idea and grow it well beyond expectations. Nathan’s imaging work is opening up many avenues for fundamental air-sea interaction research.”

The GoMRI community embraces bright and dedicated students like Nathan Laxague and their important contributions. The GoMRI Scholars Program recognizes graduate students whose work focuses on GoMRI-funded projects and builds community for the next generation of ocean science professionals.

Visit the CARTHE website to learn more about their work.

This research was made possible in part by a grant from BP/The Gulf of Mexico Research Initiative (GoMRI) to the Consortium for Advanced Research on Transport of Hydrocarbon in the Environment (CARTHE). The GoMRI is a 10-year independent research program established to study the effect, and the potential associated impact, of hydrocarbon releases on the environment and public health, as well as to develop improved spill mitigation, oil detection, characterization and remediation technologies. An independent and academic 20-member Research Board makes the funding and research direction decisions to ensure the intellectual quality, effectiveness and academic independence of the GoMRI research. All research data, findings and publications will be made publicly available. The program was established through a $500 million financial commitment from BP. For more information, visit https://gulfresearchinitiative.org/.